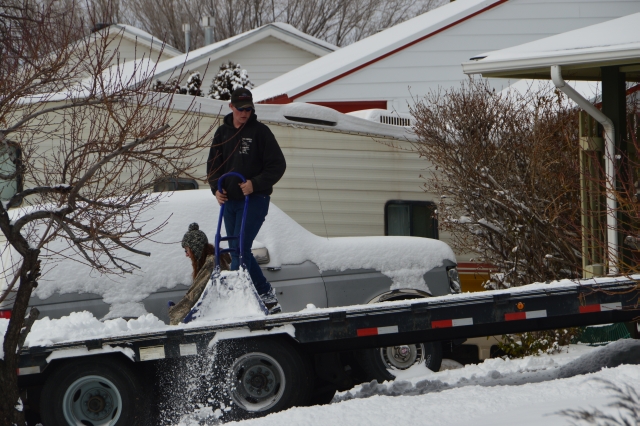 Four Democrats and three Republicans and one Libertarian vying for four seats on the Los Alamos County Council participate in a League of Women Voters Forum Thursday evening in the student center at UNM-LA. League Co-President Barbara Calef, center, welcomes the crowd. Photo by Carol A. Clark/ladailypost.com 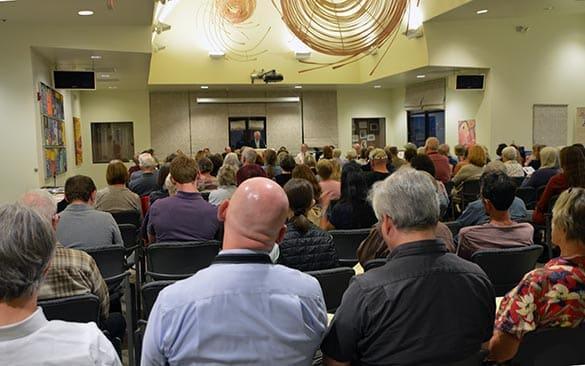 A crowd packs the hall Thursday evening in the student center at UNM-LA to hear eight candidates vying for four seats coming open on the Los Alamos County Council. Photo by Carol A. Clark/ladailypost.com

The eight candidates for Los Alamos County Council all stressed their love for the community and their desire to serve it.

Izraelevitz said he is proud of his record during the seven years he has served on County Council. He pointed to such achievements as the Ashley Pond Park refurbishment project and the overhaul of the County’s computer system and improvements to basic infrastructure as testaments to his stewardship. He said he has achieved the goals he set for himself as a councilor: communicate with and advocate for citizens, oversee County services and practice strategic thinking to achieve County goals.

“The community has helped to raise my family,” Izraelevitz said. “It’s been an honor to serve.”

First-time candidate Scott said one of her goals is to increase communication with citizens, a process she began with her “Let’s Chat” sessions, eight so far, during her campaign. Scott said her strengths include leadership of a large group during her years at Los Alamos National Laboratory (LANL), good communication skills, and her “passion to make a real difference.”

Scott said Los Alamos needs to increase its economic base by nurturing existing businesses as well as attracting new ones. She emphasized the importance of making Los Alamos an attractive place to live, including providing recreational opportunities and serving and embracing the town’s changing demographics, as retirees choose to remain, as well as new people arriving.

“I will work respectfully and hard for you and continue to listen and learn from you,” Scott said.

Like Scott, Robinson has been a Los Alamos resident for 30 years, however he got here through a different route. He was born here. Robinson is a third-generation LANL employee. Robinson stressed his public service as chair of the County Environmental Sustainability Board and UNM-LA mil levy campaign, as well as his work with wildlife rescue.

Promising “an open ear to all our citizens,” Robinson said his goals include expanding environmental protection and developing the town’s recreation and tourism opportunities. Teamwork and forming partnerships would be his path to success on the Council, Robinson said.

Ryti, another first-time candidate, has lived in Los Alamos since 1992 and is co-founder of Neptune and Company. His community service includes six years on the board of the Pajarito Environmental Education Center, 10 years helping to organize the Los Alamos Public Schools Science Fair and four years on the County Transportation Board. Ryti said “getting out and talking to people is the most important key to success for a councilor.

He said lack of housing was one issue at the top of his agenda.

“We need a broad array of housing,” Ryti said. “If UNM-LA students could live here, they could also work here and provide businesses with employees.”

Redevelopment of existing properties should not be overlooked, in addition to new housing options, he said.

“I’m optimistic about our future,” Ryti said. “We’ll get through this [possible GRT funds crisis].”

Milenski, the lone Libertarian in the race said people should give her party a try! A Los Alamos High School graduate and longtime resident, Milenski is probably best known for her recent involvement with the code enforcement and creation of the Community Development Advisory Board.

The County needs to “get out of the way” of businesses, Milenski said. She said the County should seek to attract a diversity of businesses. Also, on her list is improving County infrastructure.

Another first-time candidate, Republican Dawn Trujillo Voss said she believes in change and maximizing opportunities. She promised to be a coalition-builder and “reach across to both sides”. She thanked the two other women candidates in the race for “stepping up,” as women are too seldom on the ballot, she said. Trujillo Voss has a degree in project management and works at LANL.

“I don’t take no as the final answer,” she said. “No one can take away my voice and I’ll make sure no one takes away yours.”

Republican and first-time candidate Brady Burke came out swinging at the current state of County government. He said the Council was too cozy with the County and its staff.

“Government has grown so large and the Council so detached, they are not serving the citizens,” he said.

Burke said County residents voted to retain the sheriff position and against the Recreation Bond and their wishes were not respected by the Council.

“We need to bring back town hall meetings,” Burke said.

Burke wants to slow down the fast tracking of public projects. He said the County needs to “stop spending at high speed.” Burke was clear that he will not support tax increases. Issues important to Burke include housing that is affordable for working families and more investment in White Rock.

Bliss, chair of the Republican Party of Los Alamos, said he’d been talking about economic development and its importance for years, and it remains an important issue.

“We need to make it easy to do the right thing,” Bliss said of County regulation.

Bliss said his four grandchildren who live in Los Alamos are his motivator for making the town a better place to live. He said during his years in the U.S. Army and then at LANL, he has been known for his leadership abilities and ability to complete complex tasks on time.

“We don’t know what the issues will be in the future,” Bliss said. “We need leadership to do it all.”

The question period was dominated by the Flow Trail Project and the possible loss of gross receipts tax if the new consortium managing LANL is shown to be a non-profit.

Issues over the use of the trail by both mountain bikers and equestrians have caused controversy. Burke said he is opposed to the project because of the cost and the environmental impact. He said we should not displace those already using the trail, the equestrian community and hikers.

Bliss said the County should find a place for the trail that everyone is happy with. He’s currently opposed to the trail location, but might be convinced it is workable, Bliss said.

Trujillo Voss said she is concerned about the cost. Milenski and Robinson agreed that horses and bikes don’t mix well. Both also were concerned about environmental impact and want the County to look at alternatives to the Bayo Canyon site.

“There are concerns you can’t engineer away,” Milenski said.

Both Izraelevitz and Scott support exploring more options. They urged people to hear the final proposal, as there are other sites under consideration. Both supports increasing biking opportunities. If this site is chosen, Robinson said other options for equestrians need to be found as well.

Ryti agreed with looking at the values behind the move to create the bike trail and looking at more alternatives.

On the GRT issue, Trujillo Voss said the Council needs to look at how other communities build revenue. She suggested tapping tourism and small business as a start. She also recommended a “vacancy tax” on empty business property to encourage making more space available and lowering rents.

Burke said prioritizing would be key to his approach to the possible crisis but scaling back would be necessary.

“We’ve taken on the responsibility of making the town perfect,” he said. “We should make the case to Triad (the new consortium) that improving the town benefits them.”

Milenski said we’ve been frittering away our money and need to show we can be lean.

“Infrastructure is the most important,” she said. “We need someone who can make the hard decisions.”

Bliss said business development is the long-term solution. He advocates talking to the National Nuclear Security Agency about taking on expenses such as the fire department.

“An IRS loophole lets a billion-dollar business be taxed like a church or a food bank,” Izraelevitz said. He favors working with the State Legislature to remedy the situation.

Scott agreed about working with the Legislature and said expenditures should be put on hold while the Council determines impacts and identifies strategies. She advocates working with NNSA on solutions.

Robinson also said scaling back would be necessary and that the County should work with NNSA, as did Ryti.

In their closing statements, the candidates reiterated their top points and asked audience members for their vote on Nov. 6. 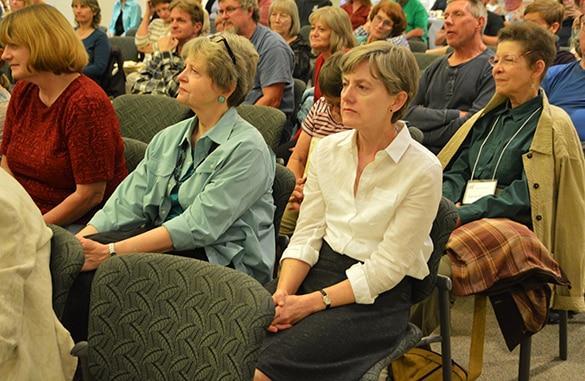 Los Alamos Probate Judge Anne Nobile, front right, running unopposed for re-election delivered remarks to the audience before taking a seat to listen to the council candidates. To her left is Rotary Club Vice President Linda Hull. Photo by Carol A. Clark/ladailypost.com 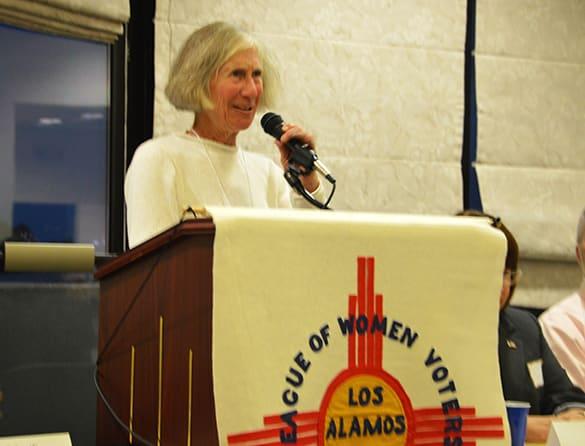 LWVLA Co-President Barbara Calef welcomes the audience and sets the ground rules for the forum. Photo by Carol A. Clark/ladailypost.com 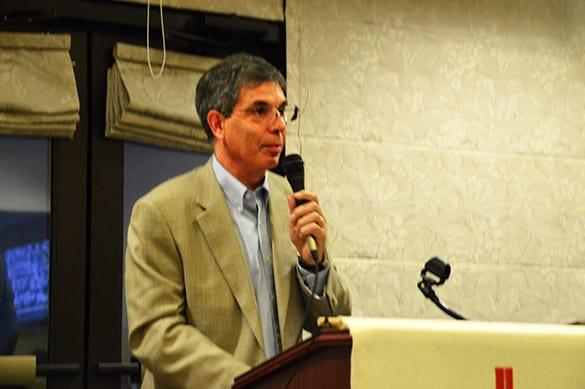 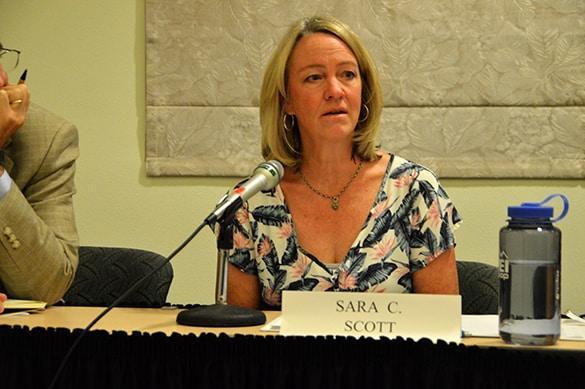 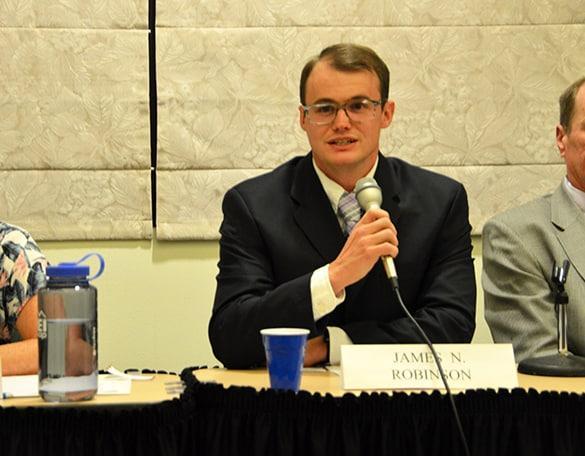 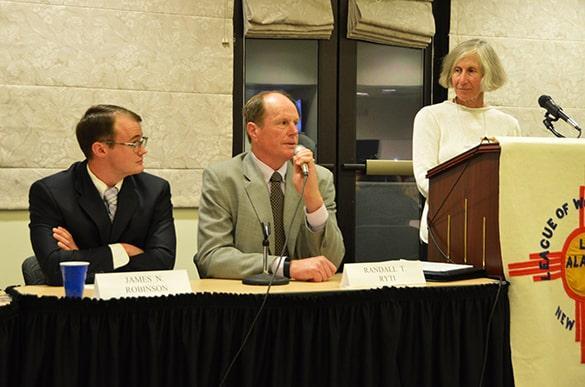 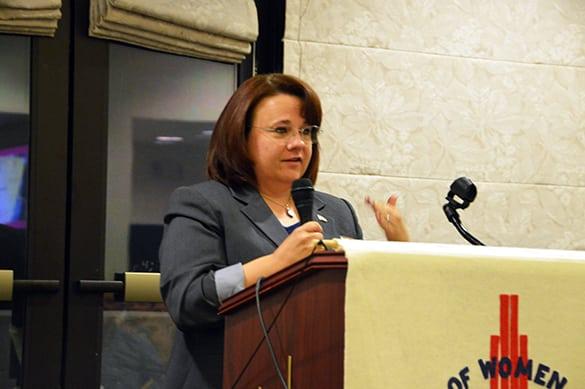 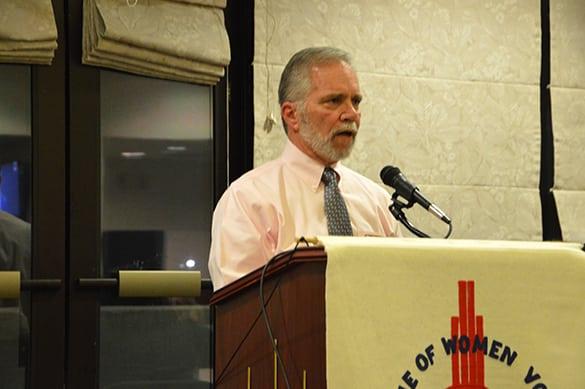 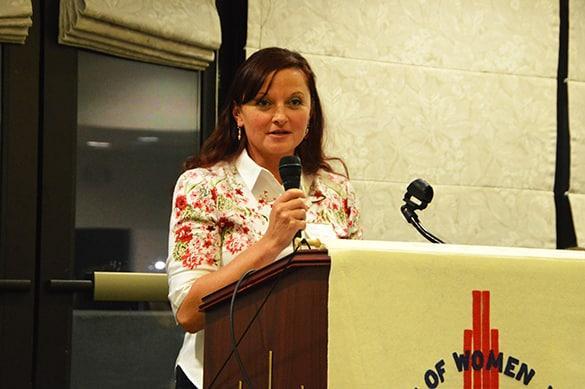 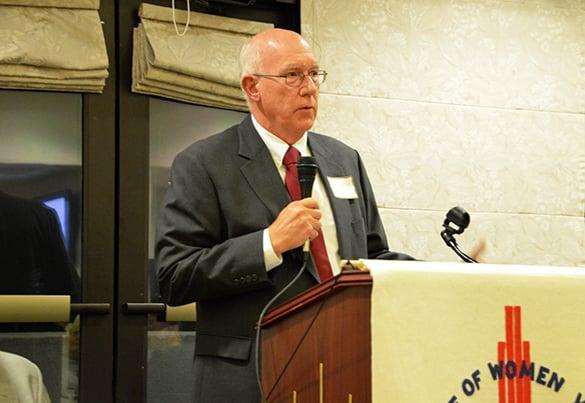 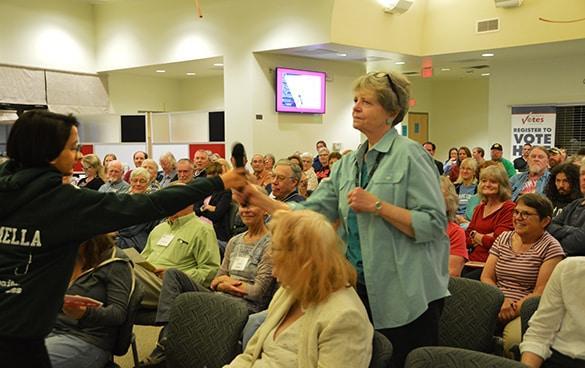 Audience member Linda Hull asks the candidates to express their opinion on the flow trail issue. Photo by Carol A. Clark/ladailypost.com 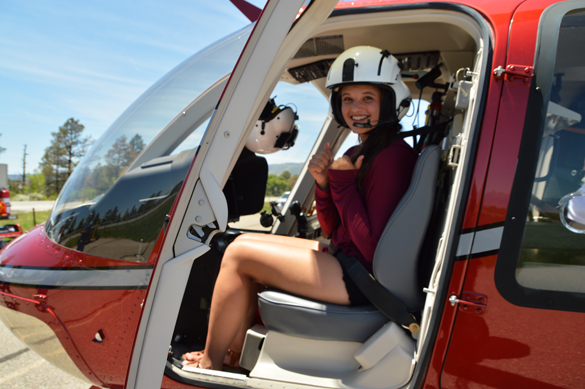 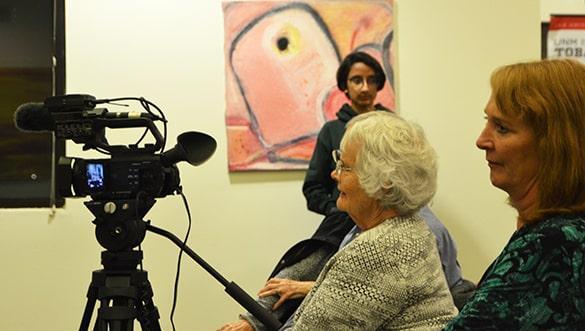 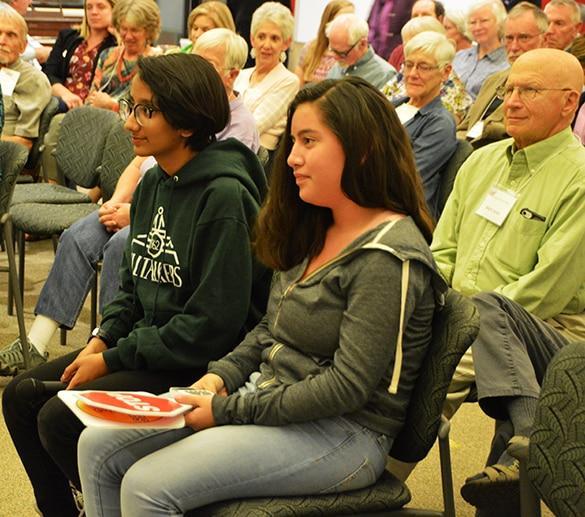 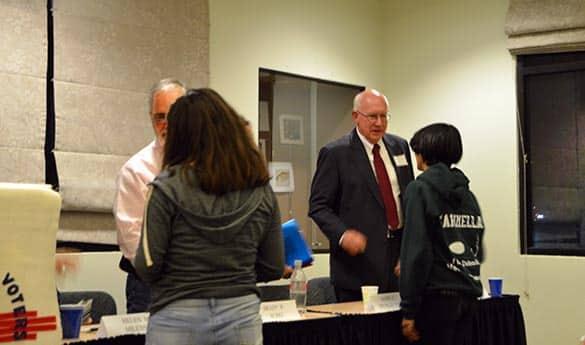