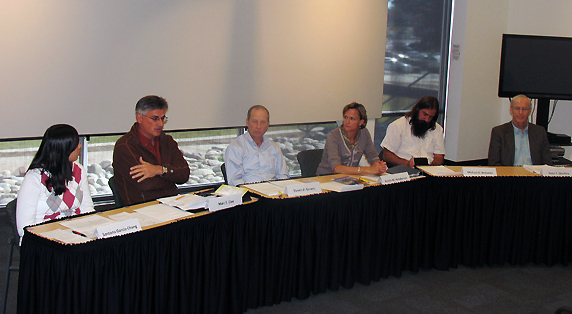 Education was the topic of a forum for Los Alamos County Council Candidates sponsored by the UNM-LA Student Government Association Tuesday, Oct. 16.

All of the candidates expressed their support for education in Los Alamos, including for UNM-LA. Clay and Redondo said they have attended UNM-LA.

The candidates were all concerned about being fiscally responsible while providing the best possible educational opportunities to Los Alamos citizens.

“People are concerned about spending, but they want us to invest in education,” Sheehey said. “We must be totally honest about the costs and benefits.”

Redondo called UNM–LA “an incredibly important resource.”  Henderson pointed to the small class size at UNM-LA as one it’s most attractive features and commented that UNM-LA has “an incredible knowledge base” to draw on for faculty.

“I’m a huge advocate of this institution [UNM-LA],” Clay said. “I’m going to be out there marketing how great UNM-LA is.”

In response to a question about how the County Council can engage young people as active members of the Los Alamos Community, all of the candidates encouraged young people to become engaged with County government, local institutions and youth programs.

Girrens suggested that Los Alamos Youth Leadership, which works with high school students be expanded to include college students as well.

When asked what they could contribute to education as County Council members, the candidates brought forward a number of ideas.

Redondo pointed out how indirectly supporting organizations with an educational component, such as PEEC (Pajarito Environmental Education Center) can enrich education.

Sheehey suggested that if UNM-LA receives an increase in its mil levy, the County could perhaps offset the tax burden through cutting costs.

Sheehey stressed supporting teachers and helping the public schools to provide a solid infrastructure. Clay agreed with this point. He also advocated working with the County to market and brand UNM-LA.

In response to the question about what the County Council might do to contribute to education in Los Alamos, Girrens suggested that capitol debts owed by the schools might be reduced or forgiven.

Sheehey stressed supporting teachers and helping the public schools to provide a solid infrastructure. Redondo pointed out the importance of affordable housing in the County so that teachers can afford to live here.

When asked to address the County’s role in meeting employment needs of local employers by providing a trained workforce, Girrens suggested that UNM-LA look at specializations that can set it apart.

“We need to look at nuclear science, bio science and especially health care,” he said.

Henderson said that it is important for new innovative businesses locating in Los Alamos to have employees to meet their needs.

“We need those people to come from here,” she said.

Redondo pointed out that UNM-LA currently attracts students from outside the county to its science and technology classes because they are superior to those elsewhere and supporting UNM-LA will encourage this trend to grow.

Sheehey noted that “low tech” as well as “high tech” is important in diversifying the Los Alamos economy.  “The County needs to work with UNM-LA to help employers get the employees they need,” he said.

Clay stressed regional partnerships and stressed that future employees needing training may come from other locations in northern New Mexico.

“Can the county help Atomic City Transit to provide transportation for students who live outside of the County?” he wondered.

In their closing remarks, the candidates explained what strengths they would bring to the County Council.

Sheehey pointed to his service on the Planning and Zoning Commission and other County boards and his experience with lobbying the state and federal government.

Redondo pointed out that he is a product of the Los Alamos education system and having received these benefits, feels a responsibility to give back to the community.

He holds a master’s degree in community and regional planning, which he feels will make him a valuable asset to the Council. He wants to prioritize updating the zoning and development code.

Redondo said he wants to bring the perspective of younger people to the Council and one of his goals is to see those raised in Los Alamos return here.

“I want to make this a place people want to come back to,” Redondo said.

Henderson sees herself as a voice for those who may not have time to become involved with County government.

“We have a form of government where you have to show up,” she said. “I want to be a voice for families.”

She emphasized her commitment to education from pre-school through college.

Girrens considers himself a pragmatist and a good listener, but sees his primary strength as being a doer. He pointed to his service on the Los Alamos School Board from 2005-2009.

“We need to look for new solutions that work across boundaries,” he said.

For Clay, visibility to the community generates excitement. He wants to collaborate with all the school entities to improve education. Affordable housing is also an important issue to Clay.

The candidates said that the questions asked in this forum were among the best they have fielded and thanked UNM-LA for making the forum possible.