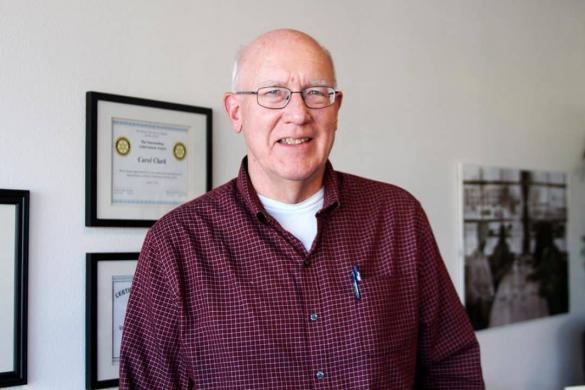 Council Candidate John Bliss during an interview Friday at the Los Alamos Daily Post. Photo by Carol A Clark/ladailypost.com

Longtime Los Alamos resident John Bliss is running for a seat on the County Council and he is no stranger to holding leadership positions.

Bliss is chair of the Republican Party of Los Alamos County. He served 22 years in the U.S. Army, retiring as a Lieutenant Colonel, Medical Service Corps. He also worked at Los Alamos National Laboratory in several leadership positions within the safety and radiation protection programs.

During an interview Friday at the Los Alamos Daily Post, Bliss shared his views on a variety of topics related to County government and community concerns.

“I want to express my appreciation for the support and interest of all residents in the election and for the courtesy extended in my first year as chair,” Bliss said. “I’ve learned a great deal. I think it’s important that we have two strong parties and not engage in ‘group think.’ Something I’ve been speaking a lot about during this campaign is the importance of consensus among those with different views … that is the only way to get optimum solutions.”

Residents on the campaign trail also have raised the issue of unintended consequences to new projects and programs, he said, adding, “I believe that while consequences may be unintended, they should not be unanticipated. Experience provides the vision to anticipate and develop options.”

Bliss worked with NATO during his service in the Army and was tasked with helping to build consensus among countries. He explained that it is not a good indicator when just a small margin of people supports something.

“It’s important to reach consensus and I’m experienced at doing that, which I believe will benefit the Council,” Bliss said.

He spoke about his military service saying people often talk about the military having one mind and being regimented. He explained that in his experience, the Army assigns a mission and its up to the personnel involved to innovate and figure out how to do it.

“Over the last seven years or so I have been called on by the Lab to analyze and fix problems … and I will bring that expertise to my role on Council,” Bliss said.

Bliss also serves on the DOE Accident Response Group and said he will have a hard time giving it up, if necessary, as he views ARG as an important mission to which he has been able to provide experience and leadership.

People he has spoken to while campaigning for office have brought up concern for the housing shortage, small business issues, economic development and permitting.

“These are the same concerns we’ve heard for many years so it’s not a question of knowing what needs to be done … what’s needed is a little more leadership and direction … that’s why I stopped taking about the issues. Everyone knows what they are … I intend to get on Council and fix them. If we expect residents to do the right thing we need to make it easy to get a building permit or start a business for example”

Bliss was raised in Detroit, Mich., and earned B.S. and M.S. degrees in Nuclear Engineering from Texas A&M University before beginning his active duty career. He chose to live in Los Alamos after retiring from the U.S. Army because while on active duty he became enchanted by New Mexico when stationed at White Sands Missile Range and later while conducting research at LANL in the early 1990’s.

He and his wife of 41 years, Nancy, live in White Rock and have raised four children, three of whom attended school in Los Alamos. He is an avid reader, gardener, fly fisherman, active on county boards and professional societies, and is a trustee at The United Church.

To learn more about Bliss, visit www.blissforlacouncil.org and on Facebook at John Bliss for Los Alamos County Council.