Utilities Manager John Arrowsmith speaks with Erik Harrigan, vice president of RBC Capital Markets in Albuquerque prior to the start of tonight’s Council meeting. Harrigan answered financial questions from Council before they voted. Photo by Carol A. Clark/ladailypost.com 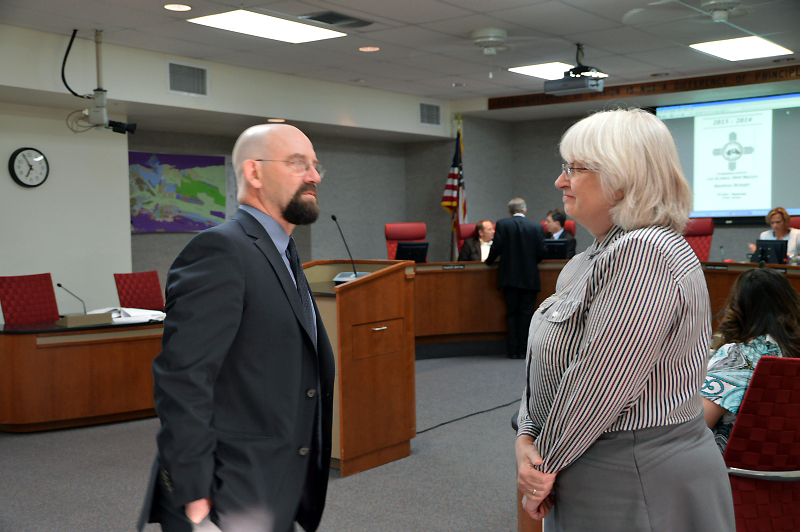 Los Alamos County Attorney Rebecca Ehler speaks with Peter Franklin of Modrall Sperling Law Firm in Albuquerque before the start of tonight’s Council Meeting. Franklin attended tonight’s meeting in case questions arose related to Ordinance No. 641. Photo by Carol A. Clark/ladailypost.com
Staff report:
Los Alamos County Council unanamously voted to adopt Incorporated County of Los Alamos Ordinance No. 641 and further moved that, upon passage, the Ordinance be published in summary form.
This ordinance will authorize the County to refund a large portion of the existing Gross Receipts Tax Improvement Bonds, Series 2008, which mature on and after June 1, 2019 and are callable as of June 1, 2018.
The proposed transaction authorizes up to $44 million in new refunding bonds to be issued. In addition to the bond proceeds, the County would contribute $6.7 million that is available currently in the debt service fund.
Those amounts would be invested in an irrevocable escrow that would be used to pay debt service on the refunded bonds until June 1, 2018 at which time they would be called and paid.
Because current interest rates are much lower than when the refunded bonds were originally issued, and they will be called in 2018 and paid off early, there are substantial annual and total savings projected to occur with this refunding.
The Ordinance provides general authorization to proceed with the refunding. The actual details of the transaction will be determined at the time the refunding bonds are marketed and will be specified in a bond sale agreement.
This agreement will be brought to Council May 21 for consideration of final approval of the transaction.
This is only refunding debt, so all the proceeds will be used for the refunding transaction. There are no new projects that will be funded with this debt.
The general concept of refinancing debt was included in the FY 2014 budget development guidance approved by the Council in January 2013.
Menu
LOS ALAMOS