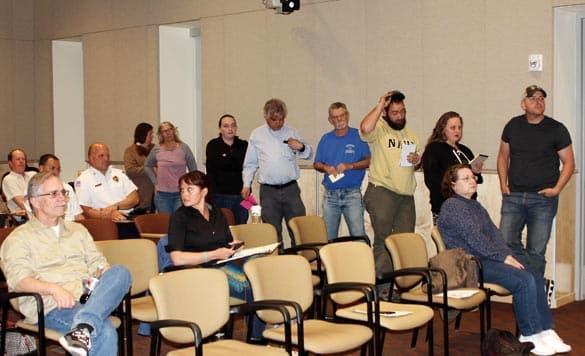 Residents line up to voice their opinion on the code enforcement issue during the public comment period of Tuesday’s Council meeting. Photo by Kirsten Laskey/ladailypost.com
By KIRSTEN LASKEY
Los Alamos Daily Post
kirsten@ladailypost.com

A range of emotions was on display at the Los Alamos County Council meeting Tuesday night in Council Chambers. Yet despite the anger and frustration expressed, the meeting concluded with applause.

Attendees showed appreciation toward the Council’s unanimous approval of a resolution for a 60-day moratorium of the County’s code enforcement program. The approval was passed 6-0, with Councilor James Chrobocinski absent.

The resolution was passed with several amendments:

The resolution was created by Chrobocinski and Councilor Antonio Maggiore. Maggiore presented it at Tuesday’s meeting.

“I feel the current animosity between citizens and CDD … as a whole, especially toward the code enforcement staff is creating a hostile work environment and the hope is we can take 60 days, have everyone take deep breath, and restart,” Maggiore said.

He thanked his fellow councilors for finding common ground on the issue and said he felt that the amendments to the resolution only made it stronger.

Others on Council expressed similar sentiments.

Councilor Susan O’Leary told the attendees who stated they felt the Council was ignoring them and that their thoughts and opinions on the code enforcement were unheard, “You were heard. You were heard in November.” She apologized for the length of time it took to address the issue.

Izraelevitz also called for everyone to cut each other some slack on this issue; noting code enforcement officers seemed to be getting a bad reputation but they are just doing their jobs.

Councilor Pete Sheehey said he felt the resolution was a good first step.

“The moratorium is a start,” he said.

Council Vice Chair Christine Chandler said she thought the 60-day moratorium will help lower the tenure of discussion and focus on what needs to be changed in the code.

“I feel the code needs to be improved significantly,” Chandler said.

Several County staff had questions about the moratorium.

Los Alamos Fire Chief Troy Hughes said he is strongly against any reductions in code enforcement that deal with fire hazards. With an extremely mild winter and dry conditions expected to continue, the threat of wildfires is a big concern. He said that the hope is to get voluntary compliance. He added that the fire department is willing to offer assistance in educating the public about making their homes safe from fires.

“As long as there is an opportunity to make the community safer, we’re fine with that,” Hughes said.

“Is it perfect … no,” Andrus said. He mentioned that clarifications between specific violations and descriptions of the code process could be improved. He said two weeks ago code enforcement officers started writing detailed information on the forms to help people understand their violations and citations.

Chief Building Official Michael Arellano said staff feel like they are stuck between a rock and a hard place.

“We’re trying; we are making changes ourselves to make it easier and better for the community,” he said. “Is it hard? Yes.”

Members of the public voiced their opinion about the code enforcement program during Tuesday’s meeting.

Mark Voss said when a notice of violation is handed to a property owner, their personal circumstances do not seem to be taken into account. Plus, tax dollars are used to pay enforcement officers who are interpreting what is right and wrong for property owners to do.

Heather Ortega said she felt by allowing residents to submit complaints regarding any perceived violations to the code, the County is pitting neighbors against each other. She said the community does not have a problem with a code enforcement program but there is a problem with people policing each other.

Another woman urged the council to respond to citizen concerns and ideas regarding code enforcement.

“I want us to be taken seriously,” she said. “I think that is a fair thing to ask.”

Council candidate Helen Milenski said she hoped the 60-day moratorium would provide “an opportunity to get back to common sense”. 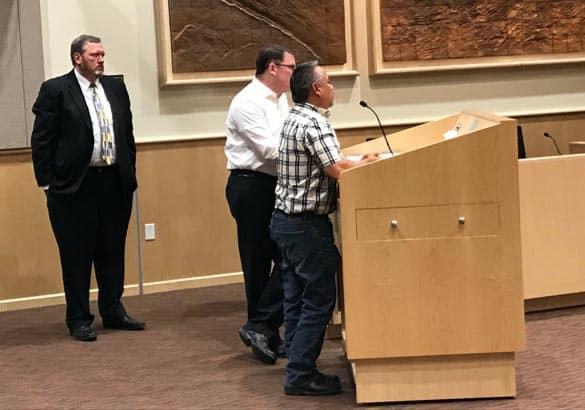 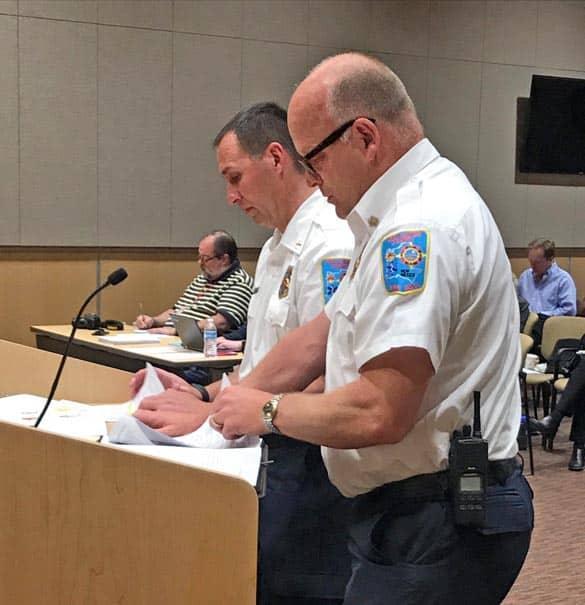