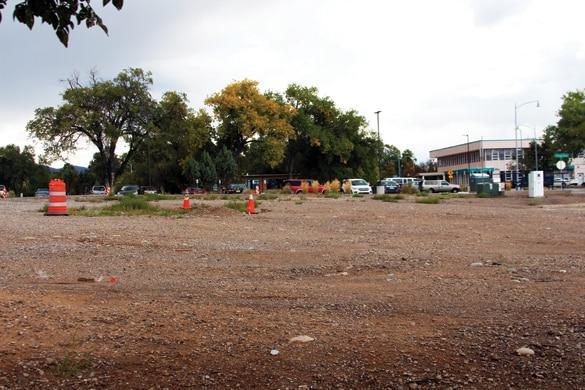 A new Starbucks is plannedfor development at 20th Street near Trinity Drive, across from Ashley Pond Park. Photo by Bonnie J. Gordon/ladailypost.com​
By KIRSTEN LASKEY
Los Alamos Daily Post
kirsten@ladailypost.com
The lines at the current Starbucks on Central Avenue and in Smith’s Marketplace too long? Local caffeine lovers may have a third Starbucks to turn to and this new coffee shop is planned to have a drive-thru.
In a 6-1 vote, Los Alamos County Council approved the sale of a parcel of land to Verdad Real Estate during its regular meeting Aug. 28 in Council Chambers. Councilor Susan O’Leary voted against the sale.
The developer, which is headquartered in Dallas, Texas, plans to construct a Starbucks with a drive-thru.
The purchase price for the land was $500,000. The price is above the 2017 market value of the parcel, which totaled $355,000.
Lot 5C is located off 20th Street. It is just west of the Century Link tower and covers about 20,959 square feet.
Los Alamos County Economic Development Administrator Joan Ahlers said the due diligence period would be for 90 days and the closing date would be 30 days after the end of the due diligence period.
She added the County’s fiscal responsibilities for the project were to do intersection improvements that could include crosswalks and potentially a traffic signal.
Ahlers pointed citizens have long requested a signal at this intersection.
“I think it’s probably a good thing to do from a pedestrian point of view,” she said.
County Engineer Eric Martinez said a traffic study had been done to evaluate if a traffic light was needed at this intersection. He said the study, which followed the New Mexico Department of Transportation analysis, concluded the intersection nearly met the requirements.
Having a Starbucks at the location would certainly put the intersection over the threshold, Martinez said.
Councilor Antonio Maggiore asked how much a traffic signal would cost and Martinez said $500,000 would be on the high end.
Maggiore added he wondered if a third Starbucks was what the town really needed.
“This is a small town-three Starbucks-is one of them going to disappear,” he asked.
Matt Zonker, a spokesperson for Verdad, said the Starbucks located inside Smith’s Marketplace is a completely separate deal. Regarding the coffee shop on Central Avenue, Zonker said Starbucks plans to monitor traffic at both locations but hasn’t made any official decisions.
Maggiore added he would have liked to have seen the bid scoring for  the parcel that revealed why Verdad ranked the highest and what else was considered. It would have been good, he said, to have some sort of matrix.
Councilor Susan O’Leary pointed out the County spent $1.3 million to construct the road on 20th Street. She asked County Manager Harry Burgess what the intention was for mixed use development with housing and what the intention was for selling the rest of the parcels.
Burgess said the request for proposals was for five lots. He added bids were received for each lot and the County would be going through the same process as the one with Verdad to approve the sales.
O’Leary said she felt there was never an opportunity to discuss what types of business would be for these parcels.
Burgess pointed out the sales were discussed during council closed sessions.
O’Leary said she felt disappointed that there wasn’t a high level review for this parcel, which would show why Verdad and Starbucks would be such great choices for this parcel.
Concerns about another Starbucks popping up in town were shared by members of the public.
Cindi Wells said she appreciated the County’s efforts to increase economic development but agreed with O’Leary and Maggiore that it would be good to have a little more information about the bid selection process.
Aaron Walker said he is happy to spend money on the hill if there is more diverse businesses. He added he felt the tax revenue would increase from diversity rather than just adding a third franchise.
Los Alamos Commerce Development Corporation Director Patrick Sullivan pointed out the market drives development. He added corporations all use different types of criteria in determining where to open a business.
Councilor Rick Reiss concurred, saying the market drives these decisions. “I am excited about this ….” he said.
Council Chair David Izraelevitz said he was sympathetic to both sides.
“(I’m) sympathetic for both sides raised. We need to do be a strategic as we can to promote public interest … (but) if we have no buyer it is going to sit idle,” he said.
Menu
Los Alamos
19°
Partly Cloudy
7:08am5:27pm MST
Feels like: 9°F
Wind: 11mph W
Humidity: 63%
Pressure: 29.83"Hg
UV index: 0
WedThuFri
32/23°F
41/28°F
43/27°F
Weather forecast Los Alamos, New Mexico ▸