Coro de Cámara: ‘Do You Hear The People Sing?’ 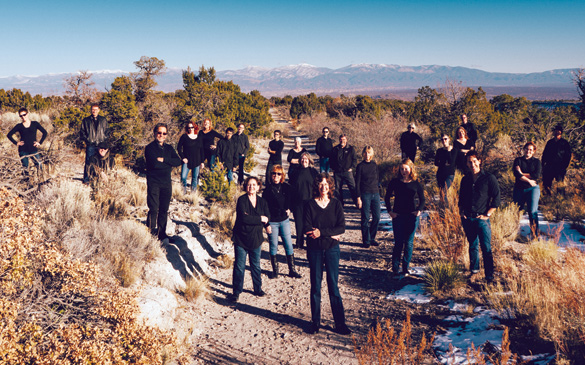 “Do you Hear the People Sing?” Coro de Cámara, Northern New Mexico’s premiere chamber chorus, will perform an exciting program featuring some of the best of musical theater and Broadway. As the concert title promises, several selections from the world’s most popular musical, Les Misérables, are a highlight of the program, along with other favorites, such as “My New Philosophy” from You’re a Good Man Charlie Brown, “Corner of the Sky” from Pippin, and “For Good” from Wicked.

The chorus also offers a stirring tribute to Stephen Sondheim, who for many is synonymous with Broadway, in the second half.  You will hear the best of his vast repertoire from a variety of his musicals, including Into the Woods, Follies, Sweeney Todd, Company, and A Little Night Music.

Due to the popularity of Coro’s lighter programs, the group typically performs one concert, out of the three in their season, that explores lighter styles of music, such as jazz and Broadway. “Hear the People Sing!” continues the chronological progression of 20th century music, which began with Coro’s multi-media Gershwin concert two years ago and last year’s popular “New York Nuance” concert featuring selections by Bernstein, Copland, Ellington, and Waller.

The idea for “Hear the People Sing!” is rooted in Artistic Director Nylea Butler-Moore’s love of and long experience with musical theater. Butler-Moore has directed, written, performed in and been a fan of musicals throughout her career.

While in London on a European singing tour, she saw a performance of the musical, Les Misérables.

“It was an astonishing production with a huge cast; an amazing set, costuming, and lighting; and a musical score that was performed with such energy and feeling that it was truly spine-tingling,” Butler-Moore said.  “I have never forgotten that experience, and now am honored to share a taste of the Les Mis experience, and Broadway, with Coro and our audiences.”

Pianists Nathan Salazar, Joe Cox, and Nylea Butler-Moore will “tinkle the ivories,” along with special guest pianist, Cindy Little. Actors will provide amusing anecdotes and background to the songs.