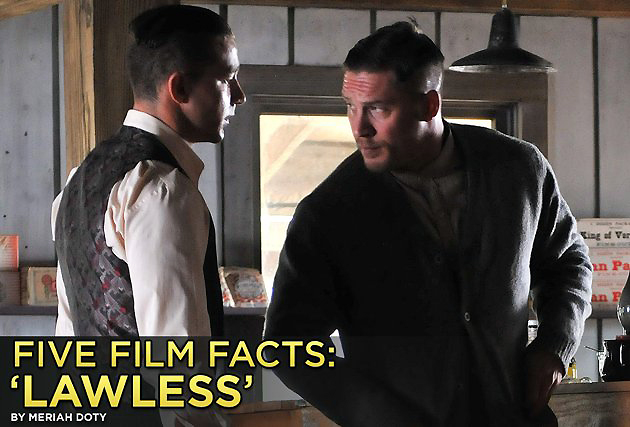 Taken from a true story and the book, “The Wettest County in the World” by Matt Bondurant, grandson of the main character, three brothers are going about their business of making their living bootlegging and selling moonshine in a pastorally green Garden of Eden when a nasty businessman/mobster (Guy Pearce) appears from the big city of Chicago, coaxing the local sheriff to come into the deal of cornering the market on the county’s moonshine.

But of course the Bondurant brothers are having none of it! So there’s the plot of Lawless.

Did you see the previews? Lots of shooting, revenge and good ol’violence. What more could you want? How about some good acting? You may be pleasantly surprised that in contrast to the previews, the acting triumphs over the violence, although you’re never quite sure when one of the brothers or evil incarnate Guy Pearce (AKA SimonLegree) are going to go berserk and shoot or maim someone.

The violence is violent, graphic and life-like. But no problem; do as my wife does and merely close your eyes. In spite of the violence she very much liked the movie. (And her two favorite movies are The Princess Bride andThe Sound of Music, and she used to think Dr. Doolittle was a real person.)

As I said, the violence takes second place to the really good acting, accurate sets, costumes and location shooting. The casting is excellent. They must have chosen some locals as the “extras”and they do a great job. Guy Pearce is excellent at being a #1 bad guy: greased-back hair and dressed to the “nines” in contrast to the sock-less, drab dress of the pea-brained locals.

Much of the movie is with the Bondurant brothers: eldest Forrest (Tom Hardy), the often drunk violent brother Howard (Jason Clark), and the youngest wet-behind-the-ears Jack (Shia LaBeouf.)

Two women come into the brothers’ lives, but what moves the movie along is the underlying hatred between the Bondurant brothers, who want to keep making their moonshine without interference, and the evil Charlie Rakes (Guy Pearce.)

Keep in mind the violence is graphic. It looks all too real.

Because so much effort was put into the costumes, cars and buildings, it is a movie worth seeing on the big screen. The movie sometimes reminded me of a Sean Connery movie from 1969 called the Molly McGuires,about Irish immigrants forming a secret union to fight against working conditions in the Pennsylvania coal mines of the 1870’s.

This was a real shift for Sean Connery in his hey day of James Bond films. Or, Matewan, a fictional 1987 movie made and directed by John Sayles, about a union organizer coming to a coal mining town in West Virginia to help organize workers against the Stone Mountain Coal Company in Matewan, W.Va. Virginia. (It was filmed by cinematographer Haskel Wexler.)

What these movies have in common is the beautiful locations chosen as a backdrop to a good adult drama, (which seems so rare these days.)

In spite of the violence, or maybe because of it, and the good acting, I have no trouble recommending this movie.