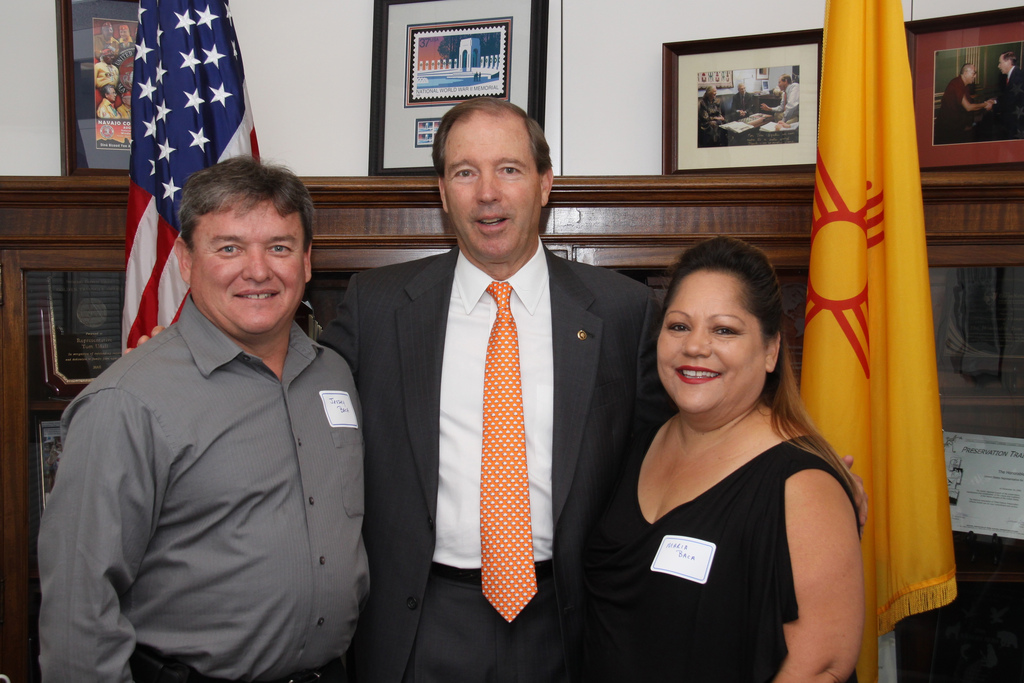 Sen. Udall in June with MSgt. Jessey Baca and his wife Maria of Albuquerque who detailed Jessey’s ailments believed caused by exposure to open burn pits. Courtesy/Tom Udall’s Office
U.S. SENATE News:
WASHINGTON – U.S. Sens. Tom Udall, D-N.M. and Bob Corker, R-Tenn., announced today that their bipartisan legislation to create a registry of service members and veterans who were exposed to toxic chemicals and fumes from open-air burn pits in Iraq and Afghanistan has passed the Senate.
The Burn Pit Open Registry Act was included as part of an omnibus veterans measure, S. 3202, the “Dignified Burial and Veterans’ Benefits Improvement Act of 2012,” which passed the Senate unanimously on Wednesday.
Udall and Corker first introduced the measure in 2011 with cosponsors Sens. Jeff Bingaman, D-N.M., Charles Schumer, D-N.Y., Bill Nelson, D-Fla., Lamar Alexander, R-Tenn., Claire McCaskill, D-Mo., and Mark Udall, D-Colo. It was unanimously passed by the Senate Veterans Affairs’ Committee in September.
“When our servicemen and women suffer from unexplained, invisible wounds, we must act to ensure they receive the treatment necessary to heal,” Udall said. “That is what we have done today, and I urge the House to act quickly on this legislation so military families, medical professionals and the Department of Defense can have the resources to provide our veterans with proper care.”
“This registry will assist the VA in learning the effects of open-air burn pit exposure among our troops who served in Iraq and Afghanistan,” Corker said. “We have an obligation to make all veterans aware of health risks associated with their service so they can access any related benefits.”
Udall began work on this legislation after meeting MSgt Jessey Baca and his wife Maria of Albuquerque, who detailed Jessey’s battle with cancer, chronic bronchiolitis, chemical induced asthma, brain lesions, TBI, PTSD and numerous other ailments believed to have been caused by exposure to burn pits in Iraq.
Earlier this year, Udall testified before a Senate Veterans’ Affairs Committee hearing on the legislation and mentioned the work of the Bacas, who had traveled from New Mexico to attend the hearing. Video of Udall testifying before the Senate Veterans’ Affairs Committee is available here.
“I am proud of the bipartisan work we have done for military families like Jessey and Marie Baca, whose efforts will help many others receive the answers they deserve after serving our country so bravely,” Udall said.
“We need to know more about the connections between burn pit exposure and health problems affecting our servicemen and women, and this registry will help us gather the information we need,” Bingaman said. “I applaud Senators Udall and Corker for working so hard to get this provision over the finish line.”
Once enacted, the bill will create a registry similar to the Agent Orange Registry and the Gulf War Registry. The establishment of an open burn pit registry will help the patients, doctors and the U.S. Department of Veterans Affairs (VA) determine to what extent air pollution, caused by open air burn pits, has led to medical diseases among service members. The legislation will also serve as a vehicle for improved communication and information dissemination for affected veterans.
As early as 2002, U.S. military installations in Afghanistan and Iraq began to rely on open-air burn pits to dispose of waste materials. The U.S. Department of Defense and numerous contractors made frequent use of burn pits at a number of bases in Iraq and Afghanistan.
The Department of the Army, Department of the Air Force and the American Lung Association have confirmed the dangers posed by burn pits, and veterans and their families have reached out to Congress for action. The amendment is supported by numerous groups, including Burn Pits 360, Veterans of Foreign Wars, the Association of the U.S. Navy, Retired Enlisted Association, the Uniformed Services Disabled Retirees and the National Military Family Association.
Summary of the Open Burn Pits Registry:
Menu
LOS ALAMOS