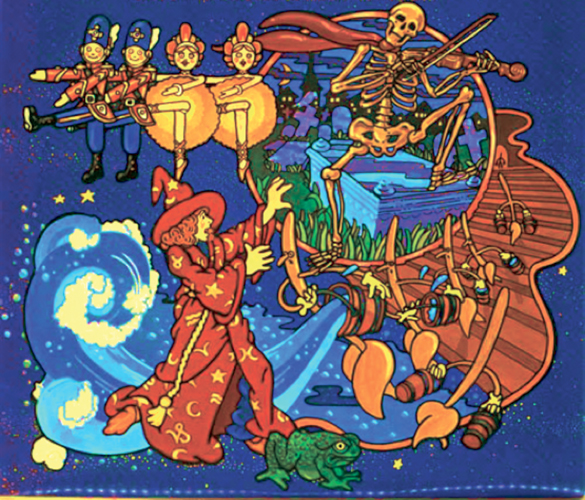 The Los Alamos Community Winds will take a walk on the wild side at their next concert, “Halloween Heroes and Horrors.”

Spooky music, with a dash of sci-fi, will be highlighted in this seasonal concert. The musicians will come in costume and there will be a costume contest with prizes for kids.

The concert is at 7 p.m. Saturday, Oct. 24 at Crossroads Bible Church. The concert is free, but donations are gratefully accepted.

The first piece on the program, “Funeral March of a Marionette” by Charles Gounod (1818-1893) will be instantly familiar to fans of Alfred Hitchcock. He used the piece as the theme song for his TV show “Alfred Hitchcock Presents.”

“Danse Macabre” by Camille Saint-Säens (1835-1921) is one of the most famous pieces of music associated with Halloween. Saint-Säens’ famous symphonic tone poem evokes devilish minions at their sport.

“Golliwog’s Cakewalk” from Claude Debussy’s *1862-1918) “Children’s Corner” is lighthearted rather than scary.

Contemporary composer Roland Barrett transports listeners back to 1947, the year of the infamous Roswell Incident, when dozens of UFO sightings were reported over a large area of the Western United States with “Roswell, 1947.”

The Winds will close the first half of the concert with “The Sorcerer’s Apprentice” by Paul Dukas (1865-1935), transcribed by Winds Musical Director Ted Vives.

The Sorcerer’s Apprentice was originally a poem by Goethe, describing the mayhem that ensues when an apprentice sorcerer bites off more than he can chew.

The music was made famous in the Disney film “Fantasia,” where the hapless apprentice is played by Mickey Mouse.

“The Sorcerer’s Apprentice” is an extremely difficult piece of music.” Vives said. “It contains about 1,000 measures in about 10-11 minutes,” he said.

Sadly, Horner was killed in a plane crash earlier this year, and the Winds is playing the piece as a tribute to Horner and to actor Leonard Nimoy (Mr. Spock) who also passed away this year.

A special treat awaits fans of Edgar Allen Poe. Special guest Melissa Mackey will do a dramatic reading as the Winds perform music inspired by three of Poe’s poems by composer Mark Lortz.

Vives wishes to remind student musicians and their teachers and band leaders, that young musicians have an opportunity to make music with internationally renowned conductor and composer Frank Ticheli as members of an honor band during the Los Alamos Community Winds Band Festival.

The festival is March 18-19 at Northern New Mexico College. The festival will wrap up with performances by the Winds and another by the Honor Band, conducted by Ticheli.

Information on how to nominate a student for the honor band is available on the Winds website at http://www.lacw.org/ Students may also self-nominate. Nominations close Nov. 20.

“Frank Ticheli is one of the biggest names in concert band today,” Vives said. “We’re tremendously excited to host him for this event.”

Vives shared the news that the Los Alamos Community Winds is a semifinalist for the prestigious American Prize this year. In 2012, the Winds took second place in the community band category.