Community Weighs In On Camp May Water Pipeline 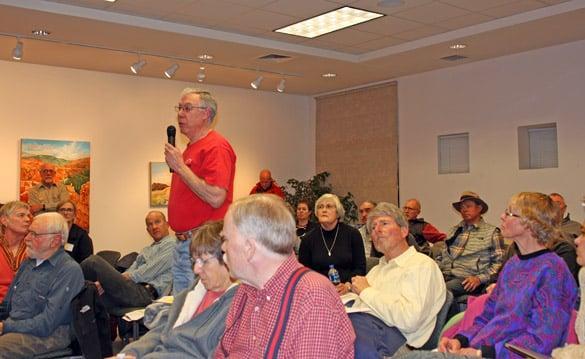 Will the proposed Camp May Water Pipeline project offer aid to Pajarito Ski Area  and resources to help fight wildfires or is it just the first building block for condos and other major developments on the mountain?

During a public meeting hosted by the Department of Public Utilities (DPU) Thursday night at UNM-LA, citizens voiced their support, questions and skepticism about what this project would mean to the area.

DPU Senior Engineer Patricio Guerrerortiz explained the meeting’s purpose was to present the facts and intent of the project as well as collect comments and concerns. The public is encouraged to offer input on the project.

Since the Santa Fe National Forest is the largest landowner affected by the project, it assumed the role as the lead federal agency to comply with the National Environmental Policy Act (NEPA). The DOE is a cooperating agency in the NEPA process. As part of an environmental assessment, the public is encouraged to provide input on the project to the Forest Service during the 30-day scoping period, which began Feb. 16.

Eric Johnson, a representative of Marron and Associates, which is a contractor involved in the project, explained what the project entails.

He said the County would pursue installing a pipeline, four pump stations and a new water tank near the current Pajarito 4 Tank on West Road. It would cover 11.31 acres but the project footprint would be long and narrow, Johnson said.

The area in question has multiple landowners. The biggest, Johnson said, is the U.S. Forest Service. Other owners are Los Alamos National Laboratory/Department of Energy, Los Alamos County and the Pajarito Ski Hill.

The pipeline’s purpose, he said, is to offer recreational snowmaking to the ski hill. It would also provide additional fire suppression capabilities.

According to an overview of the project, DPU would pump water starting at the new water tank, water would be transported up the pipeline and discharged into the existing County-owned Camp May Tank, near the ski lodge.

DPU Deputy Manager James Alarid said the total project cost is currently estimated at $3.4 million. This, he said, would be split between the County and the ski hill.

He added the project could go to County Council for approval in early 2019 or later.

One member of the audience was skeptical, wondering about the County offering financial support to a private entity when not all private entities are repcients.

Councilor Pete Sheehey emphasized this isn’t a free gift the County is giving to the ski area. “We are not giving away anything,” he said.

He pointed out the benefit the pipeline would offer to the entire County is additional resources to fight wildfires.

Milt Gillespie agreed, noting as a long-time volunteer on the mountain, he has seen first-hand the benefits of having firefighting resources on Pajarito.

“Water is a great thing for putting out fires,” Gillespie said. Have pipeline feed the existing water tank and the pond on Pajarito, “that would obviously be something of a great benefit,” he said.

Jody Benson asked if there was a limit to how much water would be transported to the ski hill and how much the customer would pay for the water.

Alarid said the water rate that Pajarito Recreation LLC would pay has not yet been determined, only that it will be charged. He added no more than 30 million gallons or 90 acre-feet a year could be used for snow making due to the system’s pumping capacity.

Another member of the public asked why potable or drinkable water would be used in the pipeline.

Alarid said it was the most reliable of the three sources available to the pipeline, which include non-potable water from the wastewater treatment plant and water from the reservoir. The other option, he said, would be to drill a well but that is a risky proposition.

“It all comes down to risk and availability and it’s just not there from the other three resources,” he said.

Several members of the audience spoke about their fears that Pajarito Recreation LLC, which manages the ski area, is ultimately planning to build condos and houses in the ski area.

Sheehey assured the audience it wouldn’t be as easy as immediately breaking ground on a housing development. The ski area is currently zoned for recreation, he said. If the County was approached with a request to rezone the area, it would require a change in the comprehensive plan. It would also allow every citizen the right to protest the zoning change, he said.

Ski Club President Susan Brockway-Hahn said, “Having a ski area here … is important for my quality of life.” She pointed out it is also a great recruitment tool for the laboratory.

Having the ability to make snow would help the ski area flourish; plus, Brockway-Hahn said she lost her home in the Cerro Grande Fire and emphasized that not having a firefighting option is dangerous.

Another woman voiced her support for the project, commenting that without the ability to make snow, the ski area will probably close. “We’re being helped here, not being hurt,” she said. 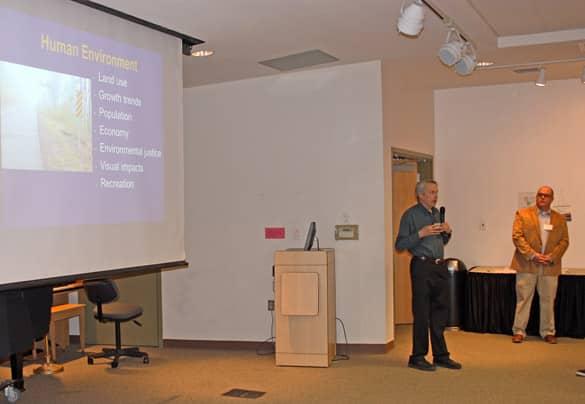 Eric Johnson, a representative of Marron and Associates, gives a presentation during the public meeting. Photo by Kirsten Laskey/ladailypost.com