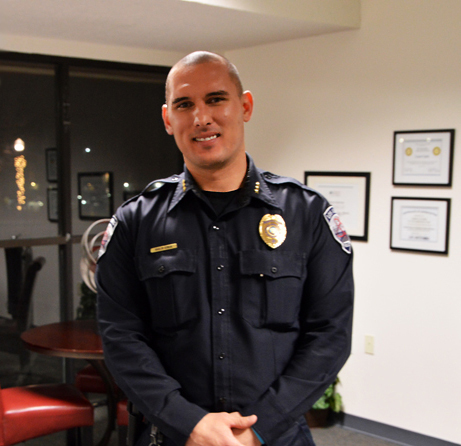 The community is invited to attend a ceremony for Commander Jason Wardlow-Herrera who will be promoted to Deputy Chief of Police for Los Alamos County Police Department.

The ceremony is 2 p.m. Monday, Nov. 24 in the Honorable Judge Pat Casados’ Chambers at the Justice Center followed by a special reception next door in the Police Department Training Room.

Wardlow-Herrera, 36, was born in Long Beach, Calif., and primarily grew up in Shamrock, Texas. His father Roy Wardlow was a project superintendent and his work took his family to many cities across the country.

“My father supervised the construction of the Foothill Communities Law & Justice Center in Rancho Cucamonga, Calif.,” Wardlow-Herrera said. “This 4-story structure situated 12 miles from the San Andreas Fault was the first building in the U.S. and the largest in the world at that time to have an innovative earthquake-resistant design to withstand a magnitude 8.3 earthquake. It has a full basement and a sub-basement for its base isolation system, consisting of 98 isolators of multi-layered natural rubber bearings reinforced with steel plates.”

Wardlow-Herrera’s mother Pennie Wardlow Herrera is a Real Estate Agent with Century 21 in Taos, NM where she has worked for more than 17 years. “My mother started the Four Corners Animal League; a nonprofit organization, in 2000. FCAL has spayed and neutered over 13,000 dogs and cats and transferred more than 5,000 dogs and pups to rescues in Colorado.”  Ms. Wardlow Herrera is currently on the New Mexico Animal Shelter Board; she was appointed by former Gov. Bill Richardson.

The youngest of five siblings, Wardlow-Herrera finished high school in Shamrock, Texas and attended West Texas A&M in Canyon, Texas where he graduated with honors with a Bachelor of Arts Degree in Criminal Justice.

“The Los Alamos Police Department is recognized as one of the most professional law enforcement agencies in the state and I am proud to be a part of it,” he said. “Being a police officer has its challenges and I’m blessed that my girlfriend Francheska Summer Sandoval is so supportive. And this community is so family friendly and safe … it’s a wonderful place to raise my 5-year-old son Jordan Tyler Herrera.”

Wardlow-Herrera is set to attend a three-month program at the FBI National Academy beginning Jan. 11 in Quantico, Va. The FBI National Academy is a professional course of study for U.S. and international law enforcement leaders that serves to improve the administration of justice in police departments and agencies in the U.S. and abroad and raises law enforcement standards, knowledge and cooperation worldwide. Leaders and managers of state and local police, sheriffs’ departments, military police organizations, and federal law enforcement agencies attend the FBI National Academy. Participation is by invitation only, through a nomination process. Participants are drawn from every state in the union, from U.S. territories, and from more than 160 international partner nations.