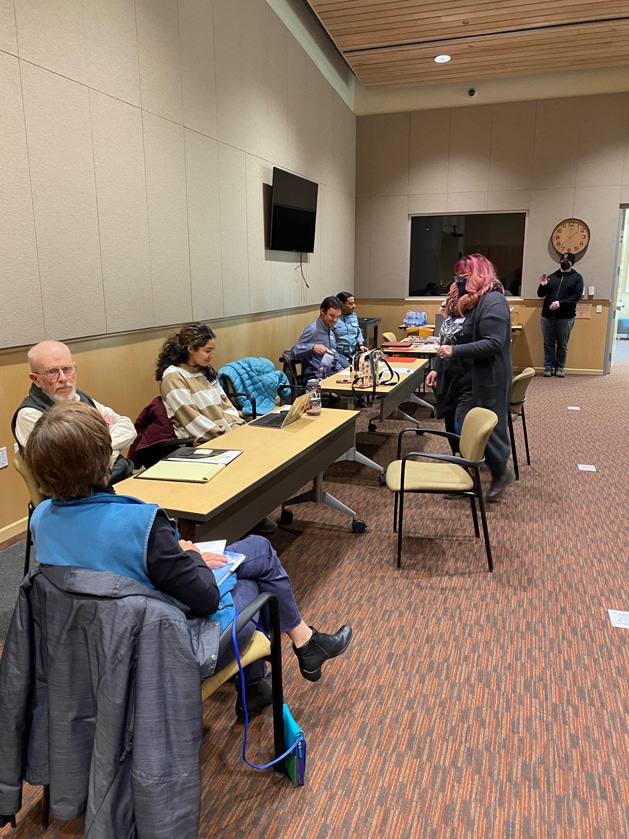 Members of the Racial Equity and Inclusivity Task Force attend the listening session held March 5 at the Municipal Building. Photo by Kirsten Laskey/ladailypost.com

This was the main message speakers presented during the Racial Equity and Inclusivity (REI) Task Force listening session held March 5 at the Municipal Building.

The stories participants shared emphasized that doing nothing only perpetuates the problems.

The session kicked off a series of listening sessions, which continues at 1:30 to 3 p.m. Saturday at the White Rock Town Hall and then again at 9:30 to 11 a.m. March 19 at Fuller Lodge.

The purpose of the listening sessions is to gather community input about what the task force should recommend to council to address racial equity and inclusivity. This include both short-term and long-term recommendations.

Green emphasized that the stories shared at Sunday’s session are respected by REI.

“You are not sharing your stories for access to care,” she said. “You deserve care for the simple fact that you are human beings in this community … your stories are not bargaining chips. We see you.”

In sharing stories and personal experiences, a 17-year-old participant urged for more changes in the Los Alamos Public Schools.

“… I know a lot of people of color, me being included in that, who have not had very positive experiences in the schools,” she said. “So, making it a more accepting place for everyone and having action instead of just being like – ‘Ah! Don’t do that – racism is bad!”

She added the bullying she experienced while at the schools was one of the factors that caused her to drop out and pursue her GED.

The teen further expressed her frustration at the lack of effort in the schools to quell any of the racist comments or behaviors she and others experience.

“No one does anything so it’s frustrating to see this happen all the time,” she said. “It’s frustrating because they’re always saying – you can tell the principal, tell the counselors, they’ll do something, and they never do.”

She added, “… the thing is when you grow up in a town like this and you grow up having people say, you can rely on adults and you can rely on people to protect you and they don’t, I think a lot of people of color here have learned not to trust anyone, to not rely on anyone and I don’t want anyone else go through that, which is why I came here today.”

The teen urged the task force will push for action, something more than a slap on the wrist.

While running for school board, Jaurigue said he saw a lot of hate and experienced a little bit of it. He added he would like to see more push back when hate is being expressed.

“…if a student is too afraid to push back on stuff when they see stuff … I would really like to see some way that could be overcome; how could we empower other students to help the student being abused … adults, too,” he said.

As a result, he said what he would like to see come out of the task force is public, ongoing, active bystander training and to have this training be an active part of the school curriculum.

Additionally, he said he would like the task force to address the structural components of racism. Adams explained that even if bigotry is eradicated from the U.S., racism would continue because it is engrained into so many systems in America.

In listening to others’ stories, Green said, “One thing I am hearing is there is a goal of naming some of our challenges. One thing I would like to name and receive feedback, if that feels correct, is the systemic gaslighting that happens to people of color in this community … so you filter yourself and you pause and you continue to engage in the narrative of best intentions.”

“Engaging in the narrative of best intentions creates an environment where the aggressive and violent behavior will continue because no one is saying that’s not OK. And that’s systemic gaslighting. Where an entire community overlooks harmful behavior because it is so micro-aggressive and then tells themselves that best intentions have to be observed,” she added.

For herself, when exposed to micro-aggression, Green said she uses a strategy she calls “pass the bean dip” or a micro-intervention.

“Pass the bean dip is an opportunity for a bystander who witnesses a micro-aggression to step in and redirect the conversation,” Green said.

By sharing this tip, Green said participants at the listening session now have a tool to act against aggression.

“Each of you here, now, has the power to share that technique with anyone at anytime and that is something more effective and going to quickly poke holes in societal issues than waiting for a task force, or school board or authoritative body to make changes,” she said.  “…I believe if we work coincidentally … individuals are more empowered to take action and urge our authoritative bodies to really examine these things. We can start to grow and move away from a harmful culture to a more inclusive culture.”