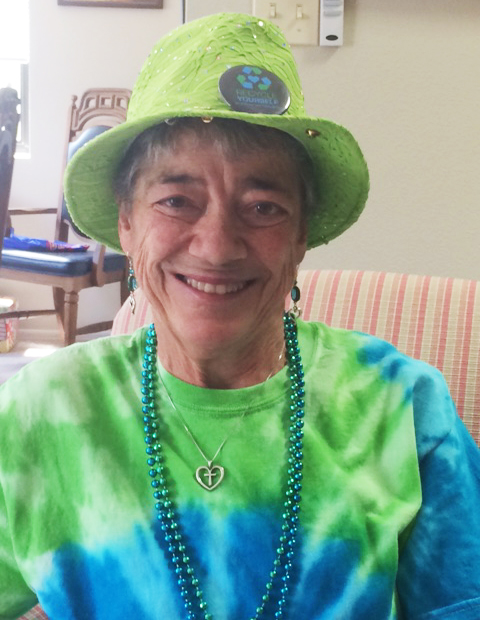 Walters received a donor heart in 2013. At 65, she was diagnosed with a progressive heart disease called Arrhythmogenic Right Ventricular Dysplasia and treated with medicines and implantation of a defibrillator.

“My heart compensated for some time, but in late 2012, it was clear I was experiencing right-sided heart failure,” Walters said. “In January 2013, I was advised to select a heart transplant center for an evaluation.”

Because her daughter lived in Hollywood, Calif. quite close to Cedars-Sinai Medical Center, that was the logical choice. After a week of tests and consultations, and a few more weeks of follow up tests at home, she was accepted as a transplant candidate and put on the national waiting list for a donor heart Three days later, she flew out to California to begin the wait, since it would have taken her too long to get there should a suitable donor heart become available. It was a good thing Walters was close at hand because two days later, on June 11, 2013, she had her surgery.

Walters continues to be healthy and says she is doing very well. She devotes a much of her to time to her Trinity on the Hill and is very active in local Republican women’s activities. She belongs to the Organ Transplant Awareness Program and travels to Albuquerque for meetings and events. The group promotes organ donor awareness, supports organ and tissue transplant candidates, recipients and donors as well as their families. Walters says she has met many inspiring people, both donors and recipients of organs.

A White House resolution for National Donate Life Month says that every day, Americans sustain the miracle of life by generously donating their organs and tissues to others in need. Living and deceased donors are celebrated in April, as well as the remarkable achievements in the area of transplants.

According to the Organ Procurement and Transplantation Network, some 33,606 transplants were performed in 2016, an 8.5 percent increase from 2015; however, more than 118,000 people are currently awaiting transplants and thousands of people die each year while waiting for an organ.

“Donors are urgently needed,” Walters said. “In New Mexico, about a thousand people are waiting for an organ transplant. One organ donor can save up to eight lives and one tissue donor can help 75 people heal”.

Walters said anyone can promote organ donation by discussing the subject with friends and family.