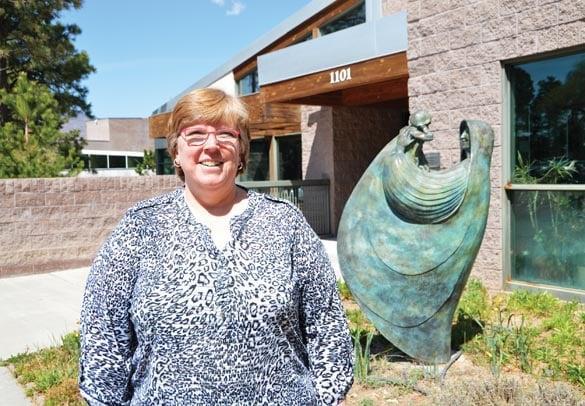 Schneider and her husband Greg are moving in July to Ottawa. She explained that she is originally from Toronto and looking forward to being back near family.

Still, the move is a little bittersweet Schneider said because she treasures her memories and experiences working at LARSO.

“I’ve tried to say yes to a lot of ideas and requests and that has almost always been a good thing,” Schneider said.

A few achievements she said she is proud of include building the addition to the Betty Ehart Senior Center for the Day Out Program. Another accomplishment was surviving all the state budget cuts  to the program over the years. Not only did LARSO survive the decreases in funding but it has been able to expand programs and never had to create wait lists for services such as the home delivered meals or transportation.

Becoming a financial partner with the Los Alamos Community Foundation was another triumph. “That’s what I wanted to see us establish – a long term funding option,” Schneider said.

Schneider has seen LARSO grow over the years and said the biggest growth was in White Rock. When she first started working at LARSO, Schneider said it was completely run by volunteers. However, in the third year, she was able to add a part-time manager and two years ago that position was made full time. Additionally, two kitchen staff were added as well as a part-time assistant for the manager and a meal driver.

LARSO is a busy place. Schneider said on a daily basis 120 people utilize the Betty Ehart Senior Center in Los Alamos and 70 people come to the White Rock Senior Center. This doesn’t include people using transportation services or having meals delivered. Every day 30 people use the transportation and 50 people receive delivered meals.

One of the biggest areas of growth is the centers’ fitness programs.

“We have more fitness classes then we ever had,” Schneider said.

Schneider said she sees the two senior centers as gathering places for people. They allow people who have not seen one another for years to be reunited. LARSO also provides guidance and resources to the younger generations who are dealing with aging parents or relatives.

Those who use the senior centers and those who work there are what she will miss the most.

“The people,” Schneider said. “The people we serve and I’ve been really fortunate to have a wonderful staff.”

She added that she will miss the variety of her work.

“No two days are ever the same, I’ll tell you that,” Schneider said.

A few memorable moments include hosting the Living Treasures ceremonies. Schneider said people’s reactions to the centers also are noteworthy. Many people exclaim how beautiful the centers are and how they did not fit their preconceived notions of a senior center.

Some individuals have shown their appreciation in other ways. Schneider said she will always remember receiving two $15,000 checks from the Marvin Mueller Estate, one for each of the centers.

Another highlight was the opening last year of the new White Rock Senior Center. Schneider added that working out of a temporary site for 18 months while the center was being built is not something she will forget.

Before coming to work at LARSO, Schneider worked at an assisted living facility in Santa Fe called Rosemont.

“I really enjoyed working with the older adult demographic,” she said.

Schneider said she didn’t know that much about Los Alamos when she first came to town but the local seniors gave her a lot of education on the history of the community. Seniors taught her a few life lessons, too.

“I think all of us who work at the senior center learn how to age well,” she said.

While unsure what her next career venture is, Schneider said she hopes it will have the same variety.

As for the next executive director, Schneider offered a few pieces of advice.

“Cultivate the skills that your staff have and certainly be very supportive of the team before you … I think as often as possible, engage with (the seniors), get their ideas, this is their center. Don’t impose but be exposed,” Schneider said.

This is important because, “I think our centers for some people are their second home,” she said.

It also is important to keep the food good. The meals that are served at the centers are a big draw, Schneider said.

Finally, “be open to doing things differently … (you) don’t have to do things the same old way.”

A number of people in the community shared their own experiences working with Schneider.

“Pauline stayed so positive as the planning proceeded for the White Rock Senior Center,” Korkos said. “During the planning process when we didn’t know where the senior center would be located or how large it could be, through the time when it seemed that we couldn’t have the commercial kitchen that would provide meals to White Rock seniors, to the culmination, her willingness to maintain a positive attitude and to compromise was essential to the realization of the project.”

On a more personal level, Korkos said Schneider provided a lot of comfort to her husband near the end of his life.

“Music had been a very important part of my late husband’s life,” she said. “Before we moved to New Mexico to open our restaurant, he had worked mainly as a professional musician, and cooking was his hobby and a second passion. As he lay dying, in the care of Los Alamos Visiting Nurses, he was comforted by Pauline’s playing.”

“She is a wonderful person to have as an executive director,” he said. “She is just outstanding … we are going to miss her.”

Tatro added that the senior centers in both Los Alamos and White Rock are “run beautifully.”