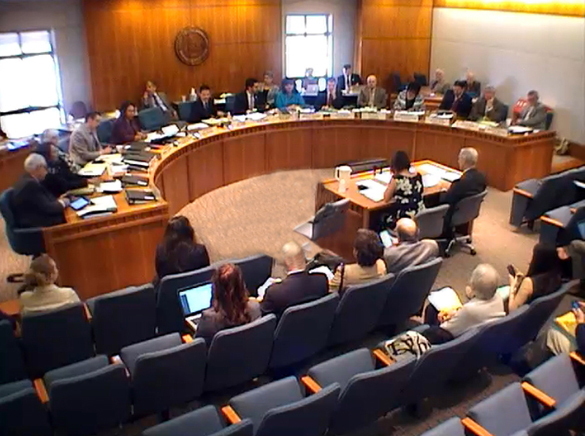 A bill designed to protect state and local governments from a potential multimillion dollar cut in gross receipts taxes hit a bump Friday afternoon, as it was temporarily tabled pending further discussions with the House Taxation and Revenue Committee.

House Bill 32 would amend a portion of New Mexico state law that currently exempts non-profit organizations from state gross receipts taxes. If adopted, the bill would create an exception for paying gross receipts by a prime contractor on income generated from operating a national laboratory in the state.

Standing for the bill was Rep. Stephanie Garcia Richard, D-Los Alamos, one of the sponsors of the bill, along with Los Alamos County Councilor Pete Sheehey.

Sheehey assured committee members that the bill would not increase taxes, but rather would prevent the loss of taxes in the event that the structure of the contract at Los Alamos should revert back to a non-profit prime contractor as it had been in 2006. That was before the current contract with Los Alamos National Security, LLC. As a profit-making partnership, LANS has paid gross receipts taxes to the state and local governments in Northern New Mexico. Annual payments have fluctuated somewhat according to the Legislative Finance Committee Fiscal Impact Report, but amounted to about $77 million in 2015.

“There is a cost to hosting these labs,” Sheehey said.

Sandia National Laboratories’ contract solicitation was awarded in December 2016 to National Technology & Engineering Solutions of Sandia, a Honeywell International subsidiary, a for-profit company, so gross receipts taxes will continue to be paid as they were with the for-profit Lockheed-Martin as prime contractor.

The situation is not yet resolved at Los Alamos National Laboratory, where the current contract is set to expire by Sept. 30, 2018. Sheehey said that a non-profit entity or partnership could be selected as the next contract manager, which would mean the current level of gross receipts taxes would no longer accrue to eligible state and local governments. He said the University of California, the original contract manager of the lab and Battelle Memorial, which operates Oak Ridge National Laboratory in partnership with the University of Tennessee, are examples of credible non-profits that could compete and win the contract.

Supporting comments included statements by Andrea Romero, executive director of the Regional Coalition of LANL Communities; Scott Scanlan, Los Alamos County’s registered lobbyist, who said this matter was the County’s number one legislative issue; and Tasia Young, of the New Mexico Association of Counties, who said she was speaking on behalf of all 33 New Mexico counties.

Rep. Jason Harper, R-Rio Rancho, who is a Sandia National Laboratories employee, said he agreed with the concept but was uncomfortable with the mechanism. “This is an exemption to an exemption,” he said, warning that the federal government might eventually refuse paying gross receipts taxes.

Acting Chairman Carl Trujillo, who lists Los Alamos National Laboratory on his work experience, said he thought the tax could discourage some companies from competing. Sheehey said this structure would simply equalize the competition. “Let them focus on who can do the job in the safest way,” he said.

Trujillo, who has worked at LANL for more than 30 years, expressed a number of concerns about timing, relative risks and chances that the legislation would not even be needed.

Sheehey said the legislation is needed now so there would be no confusion when the solicitation process begins by early next year.

After a brief dialogue, a motion to table was passed.

“I am working with the communities and committee members to address any questions the committee members may have and provide them with the information needed to move the bill forward,” said Rep. Garcia Richard, who was contacted after the meeting. “I am confident that we will see further action without too long of a delay.”

The bill was given a “Do Pass” on its first review by the House Business and Industry Committee. Having been tabled by the House Tax and Revenue Committee, the bill can be revisited with a majority vote of the committee.