Column: Requiem For A Canyon 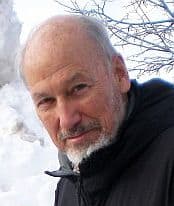 By Chick Keller
Recently we walked up what’s left of Valle Canyon.
In my memory there are three Valle Canyons – the lovely one pre-Cerro Grande – ever changing, ever beautiful, every diverse; the post Cerro Grande one, still intact at least in the lower part, and now the post Las Conchas one, which has lost its entire forest and most of the canyon bottom.
It’s hard to describe the difference. Although Cerro Grande left the cathedral-like trees and the riparian shrubs and plants, few trees are left now, and the canyon bottom has been almost totally rearranged by the flooding (as is Frijoles Canyon only worse.)
It’s hot, no shade; it’s rocky or silty, no undisturbed soil; it’s quiet, few birds.
The weeds have largely taken over. Large patches of smooth brome grass are valiantly trying to hold the soil with their intertwined underground runners.
Away from what passes for the stream bed are several species of lamb’s quarters, nettles, horseweed and others, trying to fill in the empty spaces and producing millions of seeds for next year’s weeds.
The trail has had to be nearly totally re-dozed since the floods washed most of it away, cutting 6-feet-deep gouges in many areas and tumbling large rocks across the land.
The hillsides are a forest of dead trees with an understory of struggling shrubs and forbs.
A few aspens are regrowing, but no other trees. Soil erosion has washed most of the hard-won nutrients and ground cover away.
Most species of birds that were here before are still present, but fewer. Last year the lovely yellow MacGillivray’s warblers were nesting near the stream every few hundred yards or so.
This year I heard two in a mile’s walk. One dusky flycatcher, one western tanager, one hermit thrush, and fewer others.
Only the spunky house wrens seem to be unaffected.
And so we sadly bid farewell to yet another of our beautiful forested canyons.

Some will say: “wait, the forest will come back.” Probably not. In the 12 years since Cerro Grande, where all the trees were totally burned, none have come back (excepting where planted by townspeople.)

Instead, trees have been replaced by shrubs. Entire hills are now grass and shrub land. It’s the same all across New Mexico.
Some say, “well the forests were unhealthy and too crowded due to 100 years of too much fire suppression.”
This is a true but now largely irrelevant statement because thinning the forests takes time we no longer have.
Recent mega-fires are destroying the forests faster than we can make them healthy. So we’re trading “unhealthy” forests for none at all.

Valle Canyon has joined Frijoles and Guaje Canyons and is gone, not to return in anyone’s life time.
Perhaps the saddest point here is that it was destroyed by the firefighters! It is pretty clear that the back fires they started along West Jemez Road, continued up canyon for at least a mile and perhaps much farther.
It’s ironic that, had the firefighters never been there, we’d still have our beautiful lower canyon.
Further, these back fires may have caused even the upper canyon burn, and the Los Alamos and Guaje Canyons as well, and perhaps even part of the Pajarito Mountain’s north side burn.
Firefighters are not to be blamed. It’s the only method the Federal Government will fund.
Clearly, we need to reassess how to fight fires in this new mega-fire world, or else between them and our back fires we stand to lose all of our Valle Canyons.
Menu
LOS ALAMOS