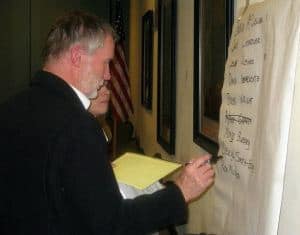 “Checks and balances” is the phrase that describes the interactions among the branches of a government that provides for limiting governmental excess by the separation of powers into legislative, executive and judicial sectors.

For example in the first instance, the federal government, the legislature passes laws but those laws can only be enforced by the executive and interpreted by the judicial, the legislature can remove judges or presidents and controls their budgets but is itself greatly constrained by being bifurcated.

And so on. In the extreme these checks and balances can and do produce gridlock so moderation is necessary.

Recently it has been alleged that the municipal government of Los Alamos operates without adequate checks and balances because there is no separation of powers similar to the federal system.

This naïve allegation has been used to justify the assertion that the referendum and initiative powers enshrined in our charter are essential to prevent municipal excess.

In this piece I want to look at the question of whether there is a separation of powers and the checks and balances are adequate.

You have to look at the broader picture to see how this works in Los Alamos because the Incorporated County of Los Alamos is an arm of state government, hence some of the seats of power are external to the municipality.

Thus, for example, judicial review of council legislation (ordinances) is done by state and federal courts, and the authorization and constraints on council action exist at multiple levels:

Federal and state constitutions, federal and state law, and the county charter. The County Administrator is the executive who enforces county ordinances as well as state and federal law, and is hired, supervised by, and removed by the Council.

The budget is constrained by state law and is subject to review and supervision by state officials.

The Municipal Court’s budget is controlled by council, the court adjudicates violations of county ordinances brought to it by the County Administrator’s employees (primarily police but others as well), but cannot review them for constitutionality and is supervised by the state judiciary.

The executive also relies on state courts for many of its law enforcement functions.

The four charter questions on the ballot on Nov. 6 include some modifications that make it marginally more difficult to exercise the initiative and referendum powers.

I’ve done a successful petition myself and I can tell you that the current Los Alamos system makes it very easy – these changes won’t be any serious hindrance to a strong petition effort.

However you feel about that, I think I’ve shown that there’s no merit at all to the claim that the powers of the Council are not adequately checked and balanced by other branches of government.