Column: A Sense Of Duty 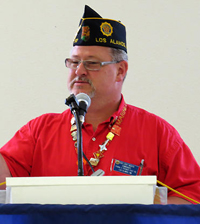 A Boy Scout takes an oath to become a Scout, “On my honor I will do my duty to GOD and my country and to help other people at all times and to keep myself physically strong, mentally awake and morally straight”. It is as simple as that.

To become an American Legionnaire one does not take an oath because one will have already done that when he/she raises their hand and swears to uphold the Constitution of the United States of America and to defend our country against all enemies foreign and domestic. One then dons the uniform of the United States of America military service then become a veteran. The motto of the Legion is “For GOD and Country”.

Both are very similar as to allegiance in the purpose and goals of each organization.

The image of The American Legion may be that of a bunch of old men sitting around, drinking beer and swapping war stories. There may be something to that because veterans do drink beer but the bulk of conversation is not war stories. It is about family, friends and just plain every day conversation. The common bond is not spoken but it is there. Part of that bond is a sense of duty to something more than one’s own self.

The American Legion is a fraternal veteran service organization that seeks to help the community and to assist veterans and veteran’s families who need help. Besides the money that it takes to run a Post the funds of the Post flow out to the Community, State, and Nation through programs that support the four pillars of The American Legions purposes.

These four pillars are Veterans Affairs and Rehabilitation, National Security, Americanism, and Children and Youth.

Here in Los Alamos, one of the top priorities is Children and Youth programs where the funds go to help in schools, hospitals, family assistance, and youth organizations like ‘Make a Wish Foundation”.  American Legion baseball is a summer program which on a national level results in many of the players going on to play major league baseball.

Perhaps the premier youth program to support Americanism is Boys’ State and Girl’s State where young men and women going into their senior year attend a week long program that gives them a comprehensive view of what government means to them. They learn all about how a democratic republic works. They learn by doing through fulfilling roles such as by being a mayor or a city councilman. All three levels of government are represented; municipal, county and state government is included. Many young men that have completed Boys State have gone on to become governors and even a President or two.

For National Security and Americanism, Post 90 contributes to high school athletics, supports the NJROTC, and the annual Oratorical Contest, wherever help is needed. For Independence Day, July, 4th, the members host a youth parade, with all colors and a hot dog lunch. The community Thanksgiving dinner shares hosting with the Elks, VFW and the KCs.

One cannot forget the disabled veteran, the veteran down on his luck, or the veteran’s family. To support Veteran’s Affairs and Rehabilitation The American Legion has a veterans service officers that assist veterans with problems getting Veterans Administration assistance such as disability pay, hospital admittance, VA home loans and helping to find jobs. The Post has an outreach program to help those in need. The Post will help a needy veteran pay his utility bills and provide help for widows and children.

At times the Post has paid for a veteran’s funeral and memorial services when there has been no one to claim the body. At one time, in cooperation with other Posts, Post 90 participated in a ceremonial interment of more than a dozen remains of unclaimed veterans in the National Cemetery.

In parades and special ceremonies the Legion proudly carries the American flag. There is more, much more that Legionnaires do for GOD and country. In fact, all totaled in the July 1, 2014 to June 30, 2015 reporting cycle, Post 90 membership contributed more than 9,300 hours and over $14,000 to programs helping dozens of people in our Community, State and Nation.

We raise money through charity events like dinners (every 2nd Friday) and breakfasts (every 3rd Sunday), fundraisers, concerts, as well as through sales in the canteen and state sponsored gaming just like Buffalo Thunder or Cities of Gold – but the money we raise is ear-marked for charity.

We are always looking for more people to help out with helping our Community, State and Nation – opportunities are wide open. So, rather than judge the organization for the bar stool some of us sit in from time to time; come in, sit in the bar stool next to us, and let’s figure out a way to become a member and for making things better for everyone, together.