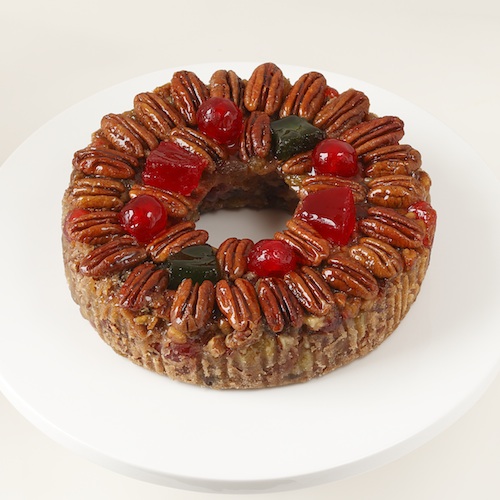 COMMUNITY News:
The Order of the Eastern Star ladies are selling Collins Street Fruitcakes 9 a.m. to 5 p.m. Friday, Nov. 4 in the lobby at Los Alamos National Bank at 1200 Trinity Dr.

For true fruitcake connoisseurs, 1896 was a banner year for it marked the first year of the Original DeLuxe®, “that famous Corsicana, Texas Fruitcake.” The grand-tasting DeLuxe®, whose recipe had traveled 6,000 miles from Wiesbaden, Germany, was introduced to this little Texas town by a gentle German baker named August Weidmann.

And if history had left the rest to Gus, this cake’s reputation might never have gotten past the city limits. Happily, though, history brought him a wealthy partner and master salesman named Tom McElwee.

The shy, perfectionist Weidmann ran his little kitchen in this newly formed Collin Street Bakery and made ready for the busy Christmas seasons. At the same time, McElwee was sending out letters, making sales trips, and lining up an ever-growing list of Bakery customers.

They made a nice team and enjoyed such success that their once anonymous fruitcakes became a delicacy to be sought after by folks from every corner of the globe.

In 1906, after outgrowing the original Collin Street Bakery in its 10th year, Weidmann and McElwee put up a structure of such ambitious size that McElwee was able to make its whole second floor into an elite private hotel. Only a flamboyant patron of the Corsicana Opera House could have pulled it off.  One like McElwee, who was accustomed to attracting the nation’s best performers to this oil and rail center, home of the first two oil strikes west of the Mississippi.

Interestingly, Magnolia Oil of Corsicana was a founding partner of what became Mobil Oil. McElwee  formed instant friendships with the visiting celebrities and made sure that every guest who boarded the outbound train had an extra cake in his travel trunk.

Folks who worked at the Bakery then remember getting glimpses of Will Rogers, Enrico Caruso, “Terrible Tempered” John McGraw and “Gentleman” Jim Corbett. They remember the great John Ringling and tell of the afternoon when Ringling’s whole circus traipsed over and ordered Christmas cakes for circus friends in every corner of the world. It brought a few nostalgic sighs when McElwee’s glamorous diggings were transformed, room by room, into an arena of executives and clerks and jangling phones. But prosperity clears its own path. The Collin Street Bakery was getting waist-deep in a new and thriving mail-order business.

Though McElwee and Weidmann died less than a year apart, the management of the Collin Street Bakery passed smoothly into experienced hands. Nothing fundamental in its operation has changed. Cakes are still baked to order and shipped direct from Corsicana, Texas to all 50 states and 196 foreign countries.