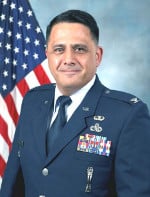 Col. Darian J. Padilla
DTRA News:
ALBUQUERQUE ― From Clovis to Albuquerque, the new leader of the Defense Threat Reduction Agency (DTRA) – Albuquerque Site, at Kirtland Air Force Base, took the helm in May.
A native of Denver, Colo., Col. Darian J. Padilla’s family roots lie in Northern New Mexico. He now considers Albuquerque home.
A U.S. Air Force Academy graduate, he was most recently stationed with the U.S. Air Force Special Operations Command at Cannon AFB, as the 27th Special Operations Maintenance Group Deputy Group Commander. Along with his 25-year history in the U.S. Air Force, he returns to a very familiar culture, climate, and mission.
“New Mexico is so unique,” he said. “It has a natural beauty unlike any other state and offers our joint warfighters an ideal arena for realistic training.”
An avid fisherman, Padilla loves to fly fish, and in his spare time serves as president of New Mexico Trout. Known for some of the best trout fishing in the U.S., New Mexico is also known for its cultural diversity and food.
“I first arrived in Fall 2011 at the Air Force Safety Center and then left for Cannon AFB three years later,” Padilla said. “When I left Albuquerque in 2014, I soon missed the people, the culture, and the green chile.”
In 2011, Padilla bought a home in East Mountains of the Albuquerque area and continued to maintain it during his tenure at Cannon AFB to have a place to stay when visiting family several times a month from Clovis. Padilla couldn’t request his next PCS because, once at the rank of colonel, the needs of the service come first.
“I had no idea where my next assignment would be,” he said. “When my wing commander called in February to tell me I was going to DTRA, I thought I would likely go to D.C. (headquarters).” When I was told Albuquerque, I couldn’t believe it, I was so happy to remain in New Mexico, my family’s state of origin.
“Now I get to live in my house again,” he said. “Not only am I back home, but shortly after arriving back in Albuquerque I met the love of my life, Claudine, who is a native New Mexican. We are engaged to be married soon. Additionally, I returned to the professional relationships I previously established here. It’s those critical connections that help achieve mission success.”
Upon his assignment at DTRA in August as the Chief of the Nuclear Logistics Operations Department, Padilla soon took on some of the site chief duties because the outgoing Site Chief, Navy Capt. James M. Bilotta, traveled so often. As he took on more of the site chief duties, it eventually made sense to Bilotta, who concurrently served as Chief of Defense Nuclear Surety Inspection Oversight, that Padilla should be the site chief. Because of Padilla’s connections in the area through previous assignments here, it made natural sense for him to become the site chief for that reason too.
“We get outstanding support from the entire New Mexico community – state, city, and local leaders,” Padilla said. “They do everything in their power to ensure Department of Defense success because they realize the critical importance of the missions at all installations throughout the state. That also includes the fantastic support from area businesses both large and small.”
Padilla also said great tenant support comes from the host base, the 377th Air Base Wing.
“The DTRA-Albuquerque site leaders engage with the 377th leaders on a regular basis and receive outstanding support in maintenance, personnel, medical needs, etc.,” Padilla said. “It all plays a significant role in DTRA’s mission success because the support allows me to keep a good pulse on the morale of our people. It is important to make sure what we’re doing keeps personnel motivated, which includes a balance of family priorities.”
“It’s amazing how the concept of work and family combined helps get the mission accomplished in an exceptional manner,” he said.
According to the President of the United States (POTUS), the Nuclear Enterprise is a priority. DTRA is one of the Nation’s key organizations in the Nuclear Enterprise. In addition to its nuclear responsibilities it has chemical, biological, and radiological missions (CBRN) around the world. The DTRA-Albuquerque site is responsible for testing and has operations at Kirtland Air Force Base, as well as White Sands Missile Range in southern New Mexico. The site also houses the Defense Nuclear Weapons School, which serves as the center for nuclear education on topics including inspections, weapons of mass destruction, and response to nuclear incidents and accidents.
“We help senior leaders and combatant commanders have the right information to make the best decisions, whether it’s for POTUS or the Secretary of Defense, we must ensure our civilian leaders and combatant commanders have the information and resources they need for their success,” Padilla said. “We are able to operate at such a high level because our folks are the best-of-the-best, a mix of seasoned civilians, active military, and contractors. We are ready to prepare for, and combat, weapons of mass destruction and improvised threats, and ensure nuclear deterrence.”
“My job is to ensure the success continues with the “team-of-teams” concept – empowering personnel to readily accept tasks with the freedom to maneuver to get their job done and ensure combat success,” he said.
Menu
Los Alamos
27°
Fair
7:11am5:22pm MST
Feels like: 19°F
Wind: 6mph NNW
Humidity: 63%
Pressure: 30.26"Hg
UV index: 0
SunMonTue
45/27°F
46/25°F
43/21°F
Weather forecast Los Alamos, New Mexico ▸