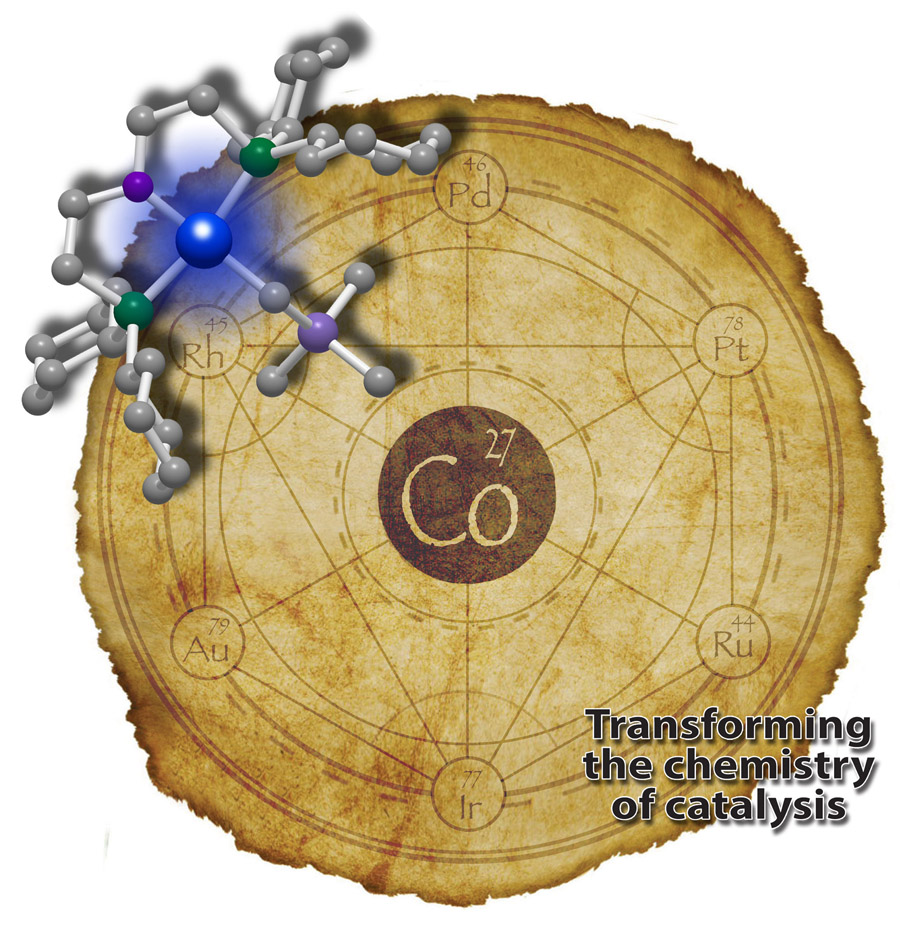 Cobalt, a common mineral, holds promise as an industrial catalyst with potential applications in such energy-related technologies such as the production of biofuels and the reduction of carbon dioxide.

That is, provided the cobalt is captured in a complex molecule so it mimics the precious metals that normally serve this industrial role.

Catalysts are the parallel of the Philosopher’s Stone for chemistry. They cannot change lead to gold, but they do transform one chemical substance into another while remaining unchanged themselves.

Perhaps the most familiar example of catalysis comes from automobile exhaust systems that change toxic fumes into more benign gases, but catalysts are also integral to thousands of industrial, synthetic, and renewable energy processes where they accelerate or optimize a mind-boggling array of chemical reactions.

It’s not an exaggeration to say that without catalysts, there would be no modern industry.

But a drawback to catalysts is that the most effective ones tend to be literally precious. They are the noble metal elements such as platinum, palladium, rhodium, and ruthenium, which are a prohibitively expensive resource when required in large quantities. In the absence of a genuine Philosopher’s Stone, they could also become increasingly expensive as industrial applications increase worldwide.

A push in sustainable chemistry has been to develop alternatives to the precious metal catalysts by using relatively inexpensive, earth-abundant metals.

The chemical complexities of the more common metals have made this research a challenge, but the Los Alamos paper holds out hope that the earth-abundant metal cobalt can serve in place of its pricier relatives.

Cobalt, like iron and other transition metals in the Periodic Table, is cheap and relatively abundant, but it has a propensity to undergo irreversible reactions rather than emerging unchanged from chemical reactions as is required of an effective catalyst.

The breakthrough by the Los Alamos team was to capture the cobalt atom in a complex molecule in such a way that it can mimic the reactivity of precious metal catalysts, and do so in a wide range of circumstances.

The findings of the Los Alamos team have major ramifications and suggest that cobalt complexes are rich with possibility for future catalyst development.

Due to the high performance and low cost of the metal, the cobalt catalyst has potential applications in energy-related technologies such as the production of biofuels, and the reduction of carbon dioxide.

It also has implications for organic chemistry, where hydrogenation is a commonly practiced catalytic reaction that produces important industrial chemical precursors.