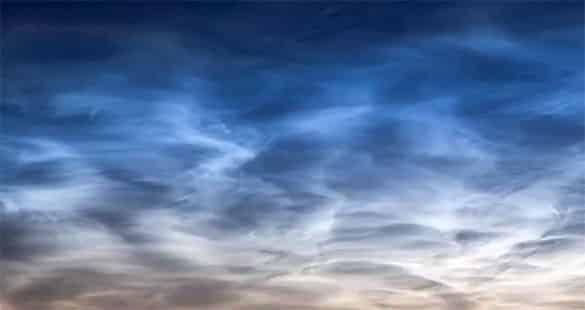 Noctilucent, or night-shining, clouds are the highest clouds in Earth’s atmosphere. They form in the middle atmosphere, or mesosphere, roughly 50 miles above Earth’s surface. The clouds form when water vapor freezes around specks of dust from incoming meteors. Courtesy/Leibniz Institute of Atmospheric Physics NASA
AGU News:
Washinton, D.C. — Increased water vapor in Earth’s atmosphere due to human activities is making shimmering high-altitude clouds more visible, a new study finds. The results suggest these strange but increasingly common clouds seen only on summer nights are an indicator of human-caused climate change, according to the study’s authors.
Noctilucent, or night-shining, clouds are the highest clouds in Earth’s atmosphere. They form in the middle atmosphere, or mesosphere, roughly 80 kilometers (50 miles) above Earth’s surface. The clouds form when water vapor freezes around specks of dust from incoming meteors. Watch a video about noctilucent clouds here.
Humans first observed noctilucent clouds in 1885, after the eruption of Krakatoa volcano in Indonesia spewed massive amounts of water vapor in the air. Sightings of the clouds became more common during the 20th century, and in the 1990s scientists began to wonder whether climate change was making them more visible.
In a new study, researchers used satellite observations and climate models to simulate how the effects of increased greenhouse gases from burning fossil fuels have contributed to noctilucent cloud formation over the past 150 years. Extracting and burning fossil fuels delivers carbon dioxide, methane and water vapor into the atmosphere, all of which are greenhouse gases.
The study’s results suggest methane emissions have increased water vapor concentrations in the mesosphere by about 40 percent since the late 1800s, which has more than doubled the amount of ice that forms in the mesosphere. They conclude human activities are the main reason why noctilucent clouds are significantly more visible now than they were 150 years ago.
“We speculate that the clouds have always been there, but the chance to see one was very, very poor, in historical times,” said Franz-Josef Lübken, an atmospheric scientist at the Leibniz Institute of Atmospheric Physics in Kühlungsborn, Germany and lead author of the new study in Geophysical Research Letters, a journal of the American Geophysical Union.
The results suggest noctilucent clouds are a sign that human-caused climate change is affecting the middle atmosphere, according to the authors. Whether thicker, more visible noctilucent clouds could influence Earth’s climate themselves is the subject of future research, Lübken said.
“Our methane emissions are impacting the atmosphere beyond just temperature change and chemical composition,” said Ilissa Seroka, an atmospheric scientist at the Environmental Defense Fund in Washington, D.C. who was not connected to the new study. “We now detect a distinct response in clouds.”
Studying cloud formation over time
Conditions must be just right for noctilucent clouds to be visible. The clouds can only form at mid to high latitudes in the summertime, when mesospheric temperatures are cold enough for ice crystals to form.  And they’re only visible at dawn and dusk, when the Sun illuminates them from below the horizon.
Humans have injected massive amounts of greenhouse gases into the atmosphere by burning fossil fuels since the start of the industrial period 150 years ago. Researchers have wondered what effect, if any, this has had on the middle atmosphere and the formation of noctilucent clouds.
In the new study, Lübken and colleagues ran computer simulations to model the Northern Hemisphere’s atmosphere and noctilucent clouds from 1871 to 2008. They wanted to simulate the effects of increased greenhouse gases, including water vapor, on noctilucent cloud formation over this time period.
The researchers found the presence of noctilucent clouds fluctuates from year to year and even from decade to decade, depending on atmospheric conditions and the solar cycle. But over the whole study period, the clouds have become significantly more visible.
The reasons for this increased visibility were surprising, according to Lübken. Carbon dioxide warms Earth’s surface and the lower part of the atmosphere, but actually cools the middle atmosphere where noctilucent clouds form. In theory, this cooling effect should make noctilucent clouds form more readily.
But the study’s results showed increasing carbon dioxide concentrations since the late 1800s have not made noctilucent clouds more visible. It seems counterintuitive, but when the middle atmosphere becomes colder, more ice particles form but they are smaller and therefore harder to see, Lübken explained.
“Keeping water vapor constant and making it just colder means that we would see less ice particles,” he said.
On the contrary, the study found more water vapor in the middle atmosphere is making ice crystals larger and noctilucent clouds more visible. Water vapor in the middle atmosphere comes from two sources: water vapor from Earth’s surface that is transported upward, and methane, a potent greenhouse gas that produces water vapor through chemical reactions in the middle atmosphere.
The study found the increase in atmospheric methane since the late 1800s has significantly increased the amount of water vapor in the middle atmosphere. This more than doubled the amount of mesospheric ice present in the mid latitudes from 1871 to 2008, according to the study.
People living in the mid to high latitudes now have a good chance of seeing noctilucent clouds several times each summer, Lübken said. In the 19th century, they were probably visible only once every several decades or so, he said.
“The result was rather surprising that, yes, on these time scales of 100 years, we would expect to see a big change in the visibility of clouds,” Lübken said.
The American Geophysical Union is dedicated to advancing the Earth and space sciences for the benefit of humanity through its scholarly publications, conferences, and outreach programs. AGU is a not-for-profit, professional, scientific organization representing 60,000 members in 137 countries.
Menu
LOS ALAMOS