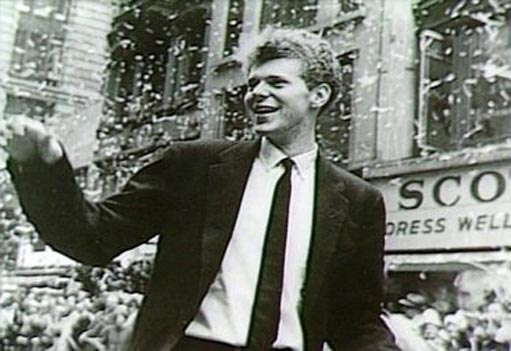 Van Cliburn in 1959, the only classical musician to be honored with a ticker tape parade in New York. Courtesy photo

It happens every four years. Competitors vie for medals as fans cheer. Paparazzi swarm about. It isn’t the Olympics. It’s the Van Cliburn International Piano Competition! The competition is underway right now and I will be reporting to you from Fort Worth every day.

The story of the competition’s birth is legendary and begins in Moscow.

In 1958, at the height of the cold war, the Soviet Union wanted to showcase its cultural superiority by mounting the Tchaikovsky International Piano Competition. Naturally, a Russian was expected to win. Imagine the jury’s consternation when a lanky young Texan named Van Cliburn not only performed spectacularly but was the overwhelming audience favorite. What to do?

Soviet Premier Nikita Khrushchev asked the right question (“Was he the best?”) and an international superstar was born.

The folks back in Texas decided to honor their favorite son by mounting a competition to rival the one in Moscow. Fort Worth was a most unlikely host for any sort of international gathering, but locals rallied around the cause and the first Van Cliburn International Piano Competition took place in 1962.

While there are dozens, maybe hundreds of piano competitions in this world, the Cliburn, the Tchaikovsky, and Warsaw’s Chopin Competition are the three that garner the most attention, at least in this country. All can supercharge a career and can be lucrative ($50,000 to the Cliburn gold medalist), but the Cliburn takes care of its medalists in ways that other competitions do not.

For example, each medalist receives commission-free career management in the three years following the competition. And then there is something really special for the gold medalist: a complete wardrobe of performance attire courtesy of Neiman Marcus. That must be quite a shopping trip!

The Cliburn wants these young artists to ease into the demanding life of travel and performance, so they take particular pains to court small presenters like the Los Alamos Concert Association. As LACA Artistic Director and an official competition guest, I expect to bring one of this year’s medalists to our concert series some time in the next three seasons.

If you have questions about the competition over the next 11 days, send me an email at annsmcl@aol.com. I’ll do my best to keep you posted as the tension mounts!

And, if you want to follow along, the entire competition is being streamed live at http://cliburn2017.medici.tv/en/. Hosting the live stream is the Anderson and Roe Piano Duo. Many of you will remember their wonderful performance here in 2014. So great to see Elizabeth Joy and Greg again!