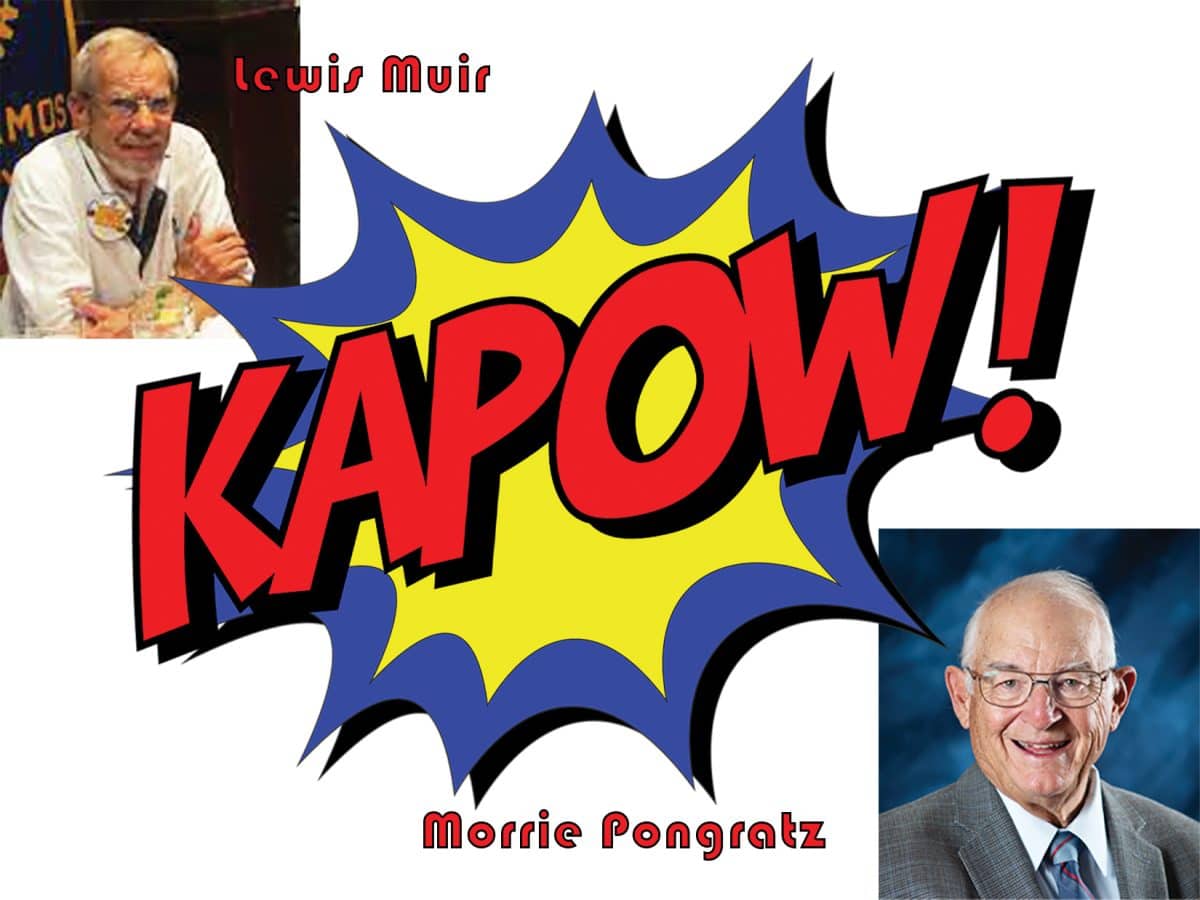 Let me introduce you to two superheroes who you may already know, Morris (Morrie) Pongratz and Lewis Muir.

Volunteers extraordinaire, these two have stepped up and stepped in to make our town a better place for decades. Pongratz served seven terms on Los Alamos County Council including council chair and vice chair.

Muir joined the Council in 1978 when he stepped in to fill the seat of Dick Daly who had to step down. He ran for re-election that fall and served two terms. When he termed out, Muir immediately ran for County Clerk and served in that role until 1986. He’d be back on the Council after the 1992 election for another two term until 2000.

Councilor David Izraelevitz may have them beat for number consecutive years of service on the Council, but in years served, these two give him a run for his money. Izraelevitz wanted to make sure they got their due and pointed out their service to the Los Alamos Daily Post. Pongratz grew up on a farm in rural Nebraska. Muir also is a farm boy. He grew up on near Stockton, Kan. They moved to Los Alamos about the same time. Pongratz came in 1973 and Muir in 1971. These two bundles of energy jumped right in and rolled up their sleeves to help their new community.

“There have been a lot of changes, some good, some not,” Muir said. “I was on the Council when they built the Mari Mac Shopping Center. It was also the time that North Mesa was opening up to development and White Rock was growing. People often say to me that it must have been easy to be on the Council years ago, but it wasn’t. The Cerro Grande Fire was a lot of work for the Council. Utilities were destroyed and the Manhattan Project hadn’t left good maps of them behind. We had to get people housed in trailers until homes could be rebuilt.”

Housing has been a problem in Los Alamos long before recent years, Muir said.

“We all ran on affordable housing platforms,” Muir said of his fellow Councilors. “People wanted to maintain some open space and our small town atmosphere, but we needed housing and we had very little place to put it. Zoning was just as big a headache back then.”

Pongratz first ran for Council in 1982 and served until 1988. His desire to help kids was his motivation for running, he said, and that desire would fuel a lifetime of volunteer activity. He’d be back in 1992, in time to serve with Muir for two terms.

“I was privileged to serve on Council back then,” Pongratz said.

“It eats at you eventually,” Pongratz said. “People mean well, but it can get tough when you get attacked.”

“I was chair of the Council in 1983,” he said. “There was no acknowledgment we had people who need help—the elderly, the poor and youth. I’m so pleased we have a Community Services Department now.”

Pongratz was on the Council in 1985 when the Aquatic Center was built.

“We essentially paid cash from Zia Corporation’s back taxes,” he remembered.

Both men had demanding full-time jobs. Pongratz worked at EG&G, Los Alamos and at Los Alamos National Laboratory (LANL) for more than 45 years. His work experience includes nuclear test diagnostics, active experiments in space, satellite-based test ban treaty monitoring and nuclear forensics. He was a four-time recipient of LANL Distinguished Performance Awards. He retired in 2012 and came back as a guest scientist until 2017.

“I loved the camaraderie, and doing tests was really exciting!” Pongratz said.

Muir spent 55 years on the job at the Los Alamos Medical Center Pharmacy. He retired at age 83.

“I knew everyone, thanks to my job,” Muir said. “I’ve always loved interacting with people. Sometimes I do wonder how I did it. I was on call at the hospital during my first term on Council. I’d go over there when the session ended, which was sometimes quite late!”

What did they do with their free time?

There is one thing Pongratz and Muir DO NOT have in common. Pongratz has been a Kiwanian for over three decades, while Muir has been a member of rival, Los Alamos Rotary Club for even longer! 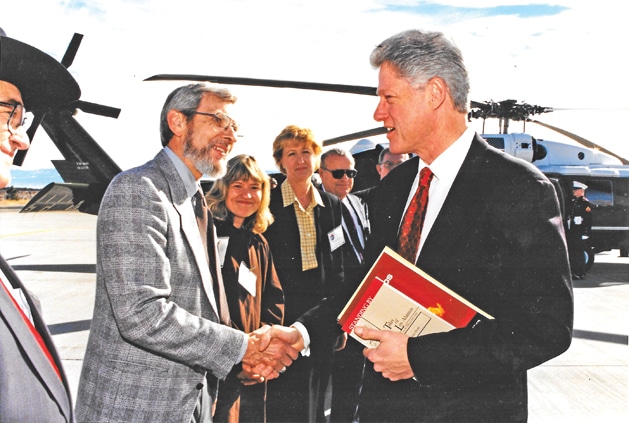 Lewis Muir shakes the hand of President Bill Clinton in 1998, while Morrie Pongratz peeks in on the left. Also pictured are Christine Chandler, Denise Lane and Lawry Mann. Courtesy/Lewis Muir