By CYNTHIA BIDDLECOMB
Los Alamos
“Thor: Ragnarok” is the third Marvel Comics movie to come out in recent years featuring Thor, the Norse god of thunder. Throughout the series Thor is played by the studly Aussie actor, Chris Hemsworth, who truly is “easy on the eyes”.
All three Thor films depend on Marvel plotlines and Norse characters, but these lines do get blurred. So don’t expect the plot to make perfect sense; instead, you may find that the film will delight, surprise and entertain you if you don’t take it too seriously.
Working alongside Thor (most of the time) in this film is Tom Hiddleston who continues to play Thor’s adopted brother Loki, the god of mischief. Early on, Thor and Loki try to find Odin (Anthony Hopkins), their father, where Loki left him in an old folks home in New York City. 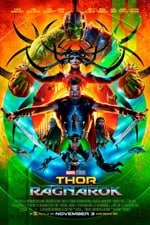 Weirdly enough, Dr. Strange (Benedict Cumberbatch) turns out to be the key to finding Odin and sends the sons to Norway. (Turns out, the Dr. Strange movie set had not yet been dismantled, so the director worked him into his plot.)
Each of the three Thor movies has had a different director. This one is directed by New Zealand’s Taika Waititi (What we do in the Shadows); Waititi also plays the character Korg in the film, a friendly gladiator imprisoned with Thor and the Hulk (Mark Ruffalo) on the planet Sakaar.
The Grandmaster of Sakaar is played, with a sly sense of humor, by Jeff Goldblum (The Fly). Waititi occasionally allowed the actors to improvise in scenes; for the most part those moments are humorous and show how much fun the actors were having. Over all, the film works, the action is pretty much non-stop, the visual detail is impressive. Waititi nailed this one.
As the storyline progresses, Thor discovers that, without Odin to hold the planet Asgard together, Odin’s eldest offspring, Hela (Cate Blachett), has broken free from captivity, fulfilling the apocalyptic prophesy of Ragnarok, the era of destruction. Hela is bent on death as the only way to strengthen and broaden the realm controlled by Asgard. Clearly, Blanchett is having a really good time playing Marvel’s first female movie villain; she says she took the role with her young son’s encouragement.
Idris Elba returns as Heimdall, the former gatekeeper. His replacement, Skurge (Karl Urban) has a long way to go before he’ll gain our trust. Rounding out Thor’s team to defeat Hela is a former Valkyrie, known on Sakaar as SR-142; she is played by the Afro-Panamanian actress, Tessa Thomspon.
Some are saying this is the best Marvel movie yet. It is packed with action, moments of comic relief, awesome special effects (watch for the artwork used to portray the flight of the Valkyries!), and an upbeat feel, despite the death and destruction perpetrated by the antler-adorned Hela. At 2 hours and 10 minutes, the film never drags. It will be worth your entertainment dollar to go see it.
Thor: Ragnarok is “Rated PG-13 for intense sequences of sci-fi violence and action, and brief suggestive material” so young children ought to be discouraged from seeing it.
Menu
LOS ALAMOS