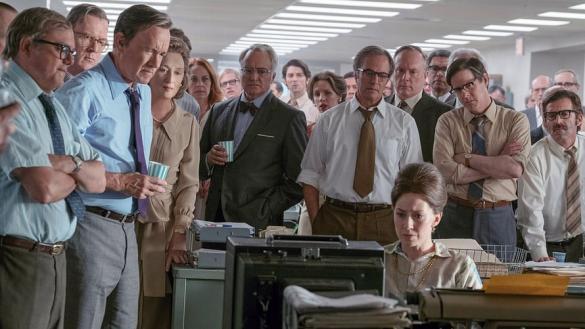 ‘The Post’, distributed by 20th Century Fox, is now showing at the Reel Deal. Courtesy/Everett

“The Post” is Stephen Spielberg’s latest film, in limited release late in 2017, then opening nationwide Jan. 12. It recounts the dramatic story of The Washington Post newspaper’s publication of what came to be called “The Pentagon Papers”. The film received six Golden Globe nominations and stands to be nominated for several Oscars later this month.

Outstanding among a very fine cast are Meryl Streep as Katharine Graham, publisher of the Washington Post, and Tom Hanks as Ben Bradlee, her Executive Editor. Hanks at times truly embodies Bradlee; you can see it in his gestures or in a grumpy pose; you can hear it in the occasional gruff speech Hanks emits. Streep illustrates through the course of the film the journey of women in the middle of the 20th century: she is at first uncertain of herself, ignored and unseen, then tongue-tied in meetings; she eventually asserts her vision and the mission of the company; now, younger women marvel as she passes by, this first female CEO of a Fortune 500 company. Streep’s and Hanks’ performances are more than worthy of the adulations they’ve received.

The Post is about seeking out Truth: in 1971, the American populace was horrified to learn in the newspaper that our government had lied to us about the Viet Nam War. The news shocked people: that four successive U.S. presidents (of both parties) kept from the American people the truth that the war in Viet Nam was unwinnable, all the while requiring more young men to go and fight, and often die, in that war. A Rand Corporation study, undertaken for the Defense Department and detailing the efforts in Viet Nam, was leaked to the press by Rand researcher Daniel Ellsberg. This led major news organizations to courageously inform the public, risking the anger of President Nixon and legal recourse from his administration. The Supreme Court held a hearing within days of the publication of the story, with the Nixon Administration pushing to have the press charged with treason for the “crime” of bringing the details to light. This film will remind you that our nation survived this momentous, historical challenge to our First Amendment rights.

The cinematography in The Post takes us inside the newspaper business: a second generation owner deciding to sell shares in the paper; an intern sent running after a clue; the seasoned reporter making clandestine phone calls at a pay phone to get to a source; the Editor-in-Chief doggedly pursuing a headline and negotiating with his publisher; the creation of lead type and the rolling of the rolls of newsprint through massive presses in the wee hours of the morning; the papers being loaded onto courier trucks for delivery. Impressive attention is given to such details in this film.

Tough decisions are made every day by news organizations. The Post reminds us how much we rely on journalists to get the story right. One might note the timing for the release of this film, given our current national identity crisis—that’s yet another great reason to see The Post. It is “Rated PG-13 for language and brief war violence.”