“The Man Who Knew Infinity” tells the story of renowned mathematical theorist, Srinivasa Ramanujan Iyengar (1887-1920). Living in poverty in India, Ramanujan is a genius in number theory, but is completely unknown to the math world. How he gets to Cambridge and finally gets published and honored is the plotline of this film. 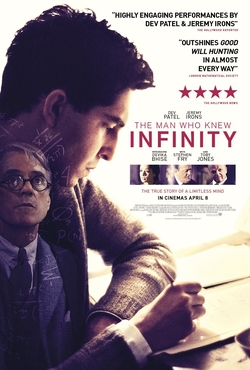 Movie poster for “The Man Who Knew Infinity.”

Playing Ramanujan is Dev Patel, whom we recognize from his compelling lead roles in Slumdog Millionaire and The Best Exotic Marigold Hotel (and Second Best…).

The film opens in Madras, where Ramanujan is struggling to find a job to support his young wife and his mother. He carries with him his mathematical theories in notebooks, but no one seems interested in his great gift. He gets an accounting job and rents a home. Finally someone believes in him puts him in touch by mail with G. H. Hardy, a Mathematics professor at Cambridge University in England.

Jeremy Irons played Godfrey Harold “G. H.” Hardy (1877-1947), a Cambridge fellow whose whole life is number theory, mathematical analysis and the University. He is not very observant of the basic human needs of his new protégé. But his relationship with Ramanujan changes, and perhaps warms, his coldly academic life.

What appeals in this movie to those of us who are not mathematicians is the personal struggle of Ramanujan at Cambridge, and of the dear wife he left behind in Madras. Racism and classism is ever present at university, among both the faculty and the students. When students, and a few faculty members, go off to fight in World War I, things get even tenser for Ramanujan at Cambridge.

The film also puts Ramanujan’s Hindu faith juxtaposed against Hardy’s atheism. Religious faith is Ramanujan’s inspiration, whereas Hardy has faith in numbers only. But this difference leads to some interesting interchanges between the two men.

The Man Who Knew Infinity seems to stick fairly close to the historical facts of Ramanjan’s life and work, and his relationship with Hardy and the Cambridge faculty. Earlier details of his life are left out, which might have given us more of a sense of the man. But all in all, the story is compelling and the film does him justice.

The film is “rated PG-13 for some thematic elements and smoking” indeed, Hardy smokes like a chimney throughout. Some war wounds are hard to stomach, when, during the war, the Cambridge quad is turned into a medical tent facility with bloody war casualties coming and going. This is a great film. Go see it!