Cinema Cindy Reviews ‘The Girl on the Train’

“The Girl on the Train” is a new thriller based on a popular British novel by Paula Hawkins.

The book, published in January 2015, quickly hit the New York Times Bestseller List, gaining the notice of those who look for stories to bring to the screen. The film opened Oct. 7 nationwide.

Admittedly, I had not read the book, so I went to the film with no preconceived notions. What I found was a story at first convoluted by “the girl” and her memory lapses – due to her alcoholic binges. She is presented as the first of three women who tell their stories at the beginning of the film. Each of the women seems unrelated to the other two except by proximity—two live a couple doors down from each other, viewed through a train window by the third woman.

Emily Blunt (who appeared in Looper) plays Rachel, “the girl” who takes the train to and from New York every day. On each pass, she looks out the train window for the same two houses and seems to fantasize about the lives of the women who live in each. Over time, we learn this is no idle fantasy, that she knows more than we first thought about the family in one of the houses, the one where Anna lives (a blond Rebecca Ferguson, who played Kathleen in Florence Foster Jenkins). 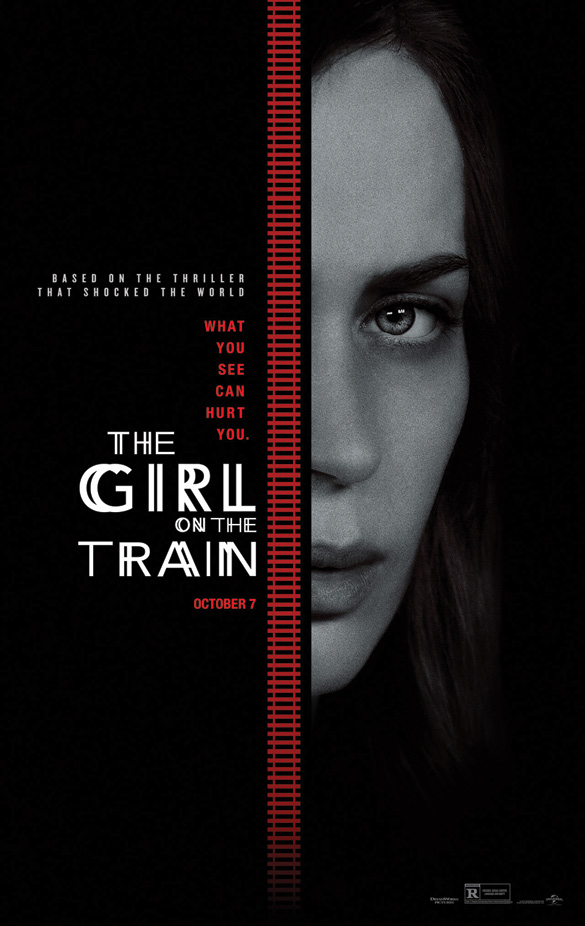 Movie poster for ‘The Girl on the Train’. Courtesy image

Soon thereafter, we learn that the third woman, Megan (Haley Bennett, recently in The Magnificent Seven”) has vanished. Rachel’s memory lapses tend to confuse the narration. She starts attending AA meetings and goes cold turkey off booze to figure things out. Did she have anything to do with Megan’s disappearance?

The tangled web that is woven begins to unravel only as Rachel’s mind gets clearer. She saw something that may help the case. Is she a reliable witness? Or is she perhaps the killer?

About “the girl” protagonist, Claire Fallon in the Huffington Post writes, “Rachel comes off as pathetic — women won’t want to emulate her — but Hawkins’ masterful deployment of unwittingly unreliable narration to evoke the aftershocks of abuse and trauma is an equally powerful way of exploring women’s marginalization.”

She goes on to say that a painful backstory is often behind a broken or confused woman, someone we might hastily dismiss.

If we were to listen, would we recognize the “internalized misogyny” in her story, or would we leave her in the dust of her experience, alone, unheard, and even further disrespected?

The Girl on the Train is “Rated R for violence, sexual content, language and nudity.” It is an adult’s movie, exploring the motivations of married women, one where the male characters are much less developed than the females.

The context for the psychological horror in this story is marriage, a sad type of marriage where each partner is still very much alone and unknown, where sexual desire motivated the commitment, rather than any true appreciation of the deeper qualities of the other.