“Queen of Katwe” is a different kind of Disney film. Rather than focusing on a pretty princess who is swept away by a prince, the movie introduces an impoverished pre-teen named Phiona who discovers a queen deep inside herself. 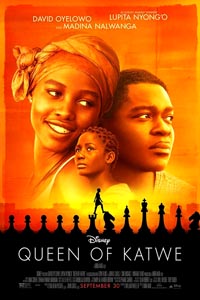 If you know how to play chess, if you have ever visited Uganda or southeast Africa, if you have lived for a time in a developing/”third-world” nation or have ever wished you had done any of these things, here is an opportunity for you to have that virtual experience sitting for just over two hours in a movie theatre. This story of triumph over adversity, of skill and ambition pitted against all odds, is Phiona’s story.

Phiona Mutesi grew up in Katwe, the largest of eight slums in Kampala, the capital of Uganda. Madina Nalwanga, cast to play the role of Phiona, was discovered in a dance class in Uganda. As she learned to act with the help of Oscar Award winning actress Lupita Ny’ongo, playing Phiona’s mother, Madina taught Lupita (a Kenyan) about Ugandan cultural ways. Nalwanga plays the awkwardness and the successes well.

The real Phiona, whom we see at the end before the credits, was a three time junior girls champion of Uganda, and played well enough for the Uganda team at her second Chess Olympiad in 2012 to be accorded the Woman Candidate Master title. And she came to all this by way of a street ministry teaching chess to slum kids.

How chess came to Katwe is Robert Katende’s story. Played expertly by British actor David Oyelowo (Martin Luther King, Jr., in Selma), “Coach” Katende offers a cup of porridge to any child who will come and learn chess from him. Chess, he says, is a game that teaches strategy, decision making and patience, not giving up, life skills needed in difficult life situations. Many, of the hundreds of kids who have gone through his program, have made it on to college and trained for professions.

The realities of the slum are stark in the film. We see Phiona walk two miles to get water for her family every morning. We see the ramshackle room in which they live, often unable to pay rent for it. Phiona’s father died years earlier. Her older sister, Night, ends up making money on the streets. A younger brother, Brian, helps Phiona sell maize each day. Baby brother Richard idolizes them all. Their proud mother despairs of having enough to feed the family. For Phiona and others to escape such slums is miraculous. But Phiona’s chess skills really are extraordinary!

Rated “PG for thematic elements, an accident scene and some suggestive material”, the film depicts a disturbing level of poverty (though much of the world lives in such conditions). The choices for girls in the slums are far worse than we can imagine, as hinted at in the film through the behavior of the older sister and the mother’s constant worries. But this is such an educational and inspiring film, I would recommend it to anyone over 7 or 8 years of age. The dialogue is humorous and the score is uplifting. This is good family entertainment, and fun for older folks, too.