“Moana” is a visual and auditory delight for adults, with a fun plot line for kids. It is an animated story of an adventurous daughter of a Polynesian chief in the pre-contact Pacific region. She defies her cautious parents and takes a large oceangoing, double canoe to find the demi-god Maui to right a wrong and rebalance nature. 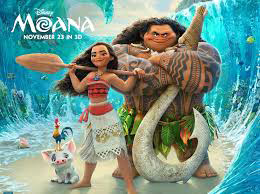 Visually, the film portrays good detail of daily life in a traditional Polynesian village; the people wear fine mat clothing and live in the same styles of thatched homes that are known to have been used in places like Samoa, Hawai’i and Fiji. Auditory delights of the film include Polynesian rhythms and a Fiji Islander choir. The score from Mark Mancina (Training Day) features his own original songs as well as those of Lin-Manuel Miranda (Hamilton) and Opetaia Foa’i of Samoa. One or two of these songs, “Shiny”, or “Know Who You Are”, may prove as popular one day as “Let it Go” from the movie Frozen.

Moana’s story builds on the mythology of a regional culture, as “Frozen” did for Scandinavia, and “Brave” did for the Gaelic peoples. In each case a particular culture is both the context of, and a character in, the plot. Disney has historically been vilified for generalizing cultural details, glossing over finer points, or denigrating and disrespecting whole peoples in the process of making a story that sells.

But the studio seems to have learned its lesson. For the making of Moana, Disney Animation Chief John Lasseter insisted on research. If you stay through the credits there’s a teaser in there, and you also will see appreciation expressed for the many advisers on the film. Listed there are people and institutions in Samoa, Fiji, Hawai’i, Tahiti and Mo’orea (French Polynesia), Rarotonga (Cook Islands) and New Zealand. The result of taking the time to consult with all these experts is a film that invites one into Polynesian cultural values, rarely experienced by non-islanders. As one privileged to have lived in the South Pacific for two of my young adult years, I was surprised to find this film so respectful of the cultural history shared by Polynesian peoples–from Hawaii to Aotearoa/New Zealand, across the South Pacific.

Moana, whose name in Hawaiian and Maori means “Ocean”, is determined to save her people; she is inspired by her grandmother’s vision and insight, and by the stories of her people when they were voyagers. To break the intensity of some moments in the film, her crazy chicken gets up to some silly antics on the boat. Her adorable pet pig did not make the voyage with her.

The other main character is the demi-god, Maui, who was said to have used his fishhook to pull the islands from the ocean and to slow the sun. (On Huahine Island, I was shown where his fishhook left its imprint on a rock face.) In this story, Maui is also credited with providing the coconut tree and other riches to the islanders. All these stories the animators tell through Maui’s tattoos, which depict his many exploits. Animated tattoos turns out to be a pretty cool idea. (Did you know that “tattoo” comes from a Samoan word and historical practice? The ali’i/nobility of Samoa and Tonga sport the tattoos of their status even today.)

Much will be written about this film. It is very nearly perfect. But if it gets nominated for Best Animated Feature, Moana faces hot competition in the category for the Oscar; just this year we had Zootopia, Jungle Book, Kubo and the Two Strings, and Finding Dory. Glad I don’t have to choose!

Take the family, grab your friends and go see this wonderful film. This one is a keeper! Moana is “rated PG for peril, some scary images and brief thematic elements.” With some intensely dangerous scenes, perhaps those under age seven needn’t see it.