“La La Land” is a pejorative term for “Los Angeles” that is used only by people who don’t live there. I’m sure the name must refer to a supposedly carefree lifestyle, seemingly unending sunshine, and a Hollywood full of starry-eyed dreamers. Having grown up with a very different experience of Los Angeles, I have never resonated with the pejorative term. But one thing the title of this movie tells me is that the filmmakers are intent on a few inside jokes for Angelinos, like me. 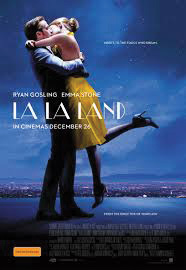 Take the opening scene: a traffic jam where people alone in their cars, with their individual musical choices blaring, suddenly decide to leave their cars and start dancing on the overpass. Of course they are mostly young adults, but I digress. Another touch is the way of marking the passage of time. Most movies can show snow for winter, rain or flowers for spring, etc. But a movie that takes place in the never-ending sunshine of LA has to put the word on the screen: “WINTER”.

La La Land received 14 Oscar nominations last week. There seems to be a sense of inevitability to its ultimately winning Best Picture. My guess is that, for the majority of members of the Academy of Motion Picture Arts and Sciences (the only people qualified to vote on the Oscar winners), this was once their story, going to LA hoping to be recognized for their art, suffering through too many disappointing gigs before they arrived one day, finally a card-carrying member of the Academy.

Who knew Emma Stone and Ryan Gosling could sing and dance? They do both quite well in the film, and Gosling even plays the piano. That’s a good thing, since Gosling’s character, Sebastian, is a jazz pianist forced to play boring set lists in restaurants until he can achieve his goal of opening a classy jazz club of his own. Stone’s Mia is a barista on the Warner Brother’s lot, going to as many auditions as she can, hoping one day to be noticed for her incredible grasp of the dramatic arts.

Through a series of incidents, Seb and Mia keep running into each other. They deny interest in each other even as their spontaneous dancing says otherwise. And with that, we’re hooked. We root for each of them as they try to make it big. Their dreams will one day be fulfilled, but what of the dreams for their relationship?

La La Land could easily have been named “City of Stars” for the song that sticks in one’s head after seeing the film. Musician John Legend (Keith in the film) served as a co-producer, evidence that music is at the heart of this movie. People may find themselves dancing out of the theater in response to the high energy of this film. For this Angelino, I loved seeing all the locations in the film: Hermosa Pier, Griffith Observatory. I had to laugh that it is 84 degrees out and the title card says “Winter”.

La La Land is “Rated PG-13 for some language”. There are no sex scenes and very few bad words, just a lot of dancing, some wonderful live jazz, warm evening strolls, sunny days, rich lifestyles, great locations, and a bit of romance. What’s not to like?