“Kubo and the Two Strings” is the latest animated film from Laika Entertainment (Coraline, The Boxtrolls), a family action adventure presented in stop-action animation. Words cannot adequately describe this film, but let’s try…

The creativity in this film is awe-inspiring. Stop-action animation means in this case that 4.3 seconds of the footage were created on average every week for nearly five years. In addition to the main characters, created with what we used to call “Claymation”, there are origami figurines, quickly created by Kubo’s story magic, which take on a life of their own. Throughout his “quest” tale, landscapes of ocean, desert, snow, a Shinto cemetery, are all richly conveyed.

Kubo plays a samisen, literally a three stringed lute, which has a square drum body and thin, fretless neck. (This is where the “two strings” come into the story.) He plays the samisen as he tells stories in the village square, earning coins to support his mother. As he plays and narrates, origami figurines evolve before the listeners and begin pantomiming the action. The villagers are enthralled. But Kubo never ends his stories, and the villagers must come back the next day to hear the next part. And anyway, Kubo must be home by dark for his own protection. 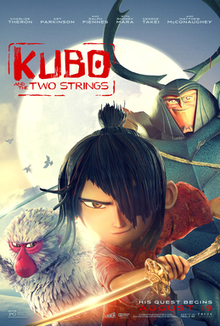 Movie poster for ‘Kubo and the Two Strings’.

We learn that Kubo is not only the son of a samurai soldier but his mother was daughter to the Moon King. She chose human love over immortality and her father and sisters have been seeking revenge for her treachery ever since. She has magical abilities with the samisen at the beginning of the film, which Kubo takes on later. She sends him on a quest to find the sword and three pieces of his father’s armor, all of which will protect him from the Moon God and his mother’s sisters.

On his quest, Kubo is helped first by a monkey—the incarnation of his carved ivory monkey charm—and then by a Samurai turned into a beetle. Together the three of them search for the armor and try to avoid the avenging deities.

Watching this movie unfold, I was struck by how different it is. Yes, there is nothing new about a child hero on a quest of self-discovery. Yes, strange creatures help him along the way. But the treatment of the culture of Japan is, for once, not just a visual context for the film’s story. In it one finds the deep and spiritual respect given to deceased loved ones and the value of family.

This is a beautiful film that will have to be nominated for the Oscar for animation, and it could very well win. Watching this film will transport you as well as entertain you. It is a visual feast! Rated “PG for thematic elements, scary images, action and peril”, Kubo and the Two Strings may be too scary for young children. Older elementary kids may enjoy it. Adults could be delighted by it. And it could become a cult classic for high school youth and young adults, as well!