“Jackie”, the movie, was released Dec. 2 of last year. It is nominated for three Oscars. A Best Actress nomination went to Natalie Portman for the film for her portrayal of Jackie Kennedy in the days following the assassination of her husband, President John F. Kennedy. An Original Score nomination and one for Costume Design also are well deserved. 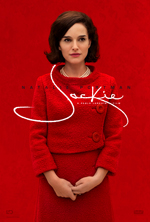 However, in all three categories, “Jackie” competes with “La La Land”, an apparent runaway hit, so we’ll see.

Those of us who were old enough in 1963 to have been traumatized by the JFK assassination, would be hard to satisfy with a movie based on those events. Thankfully, this is not a conspiracy theory film like Oliver Stone’s 1991 movie “JFK”. What makes “Jackie” the movie fresh is the psychological drama it creates, taking us into the interior world of that iconic First Lady, Jacqueline Lee Bouvier Kennedy.

The storyline is framed by the visit of a journalist (Billy Crudup) to the Kennedy home in Hyannis Port, Mass. Jackie takes control of the interview almost immediately. She will edit his work to be sure it reads the way she wants. What can he say but, “Yes, of course, Mrs. Kennedy”? The flashbacks within this framework show Jackie take immediate charge of the JFK legacy, what the funeral cortege will be like, where Jack will be buried. Portman’s emotions appear raw and real, even as her poise and dignity accurately reflect Jackie’s public persona.

The framing works very well for patching together moments of her life as First Lady. We see bits of her life with Jack, her successes bringing historical pieces back into the White House, concerts and balls she and Jack hosted there. Clearly she is brilliant and accomplished, appreciated by her husband for her many gifts. We are with her in the convertible in Dallas, on Air Force One as Lyndon Johnson is sworn in as President, flying back to DC with the coffin. In D.C., Bobby Kennedy (Peter Sarsgaard) is by her side as funeral and burial plans are made. Towards the end of the film, her conversation with a priest (John Hurt) pulls the story together.

Natalie Portman does an excellent job of portraying Jackie. Despite her disparate vocal styles throughout the film (from a Marilyn Monroe wispy narration touring television cameras around the White House to a broadly Northeastern accent when angry), Portman may yet have a good chance of winning the Oscar for Best Actress.

The film opens with tragic notes of an original score that continues for 100 minutes, marking the trauma this nation and the Kennedy family faced in those frightening days. The score does not let us rest. It creates just the right tension and poignancy.

Jackie is “Rated R for brief strong violence and some language”, that violence being a graphic depiction of JFK’s head being shot and then laying in Jackie’s lap. Thankfully, the film builds up to that moment gently enough, one personal revelation at a time, so we are ready for it when the scene arrives.