Cinema Cindy Reviews ‘Inside Out’

“Inside Out” is an exceedingly clever, 3D, Pixar (animated) film about what makes up one’s personality, what memories we treasure and why some are forgotten, and how our emotions work.

The story is about Riley, an 11-year-old girl who has had a happy childhood, is good at hockey, and has great relationships with her parents and a best friend. That is, until her family has to move from Minnesota to San Francisco. The first day or two make up most of the story—new school, new but empty house with the moving van stuck in another state, dad preoccupied with his job, mom trying to make the most of it. 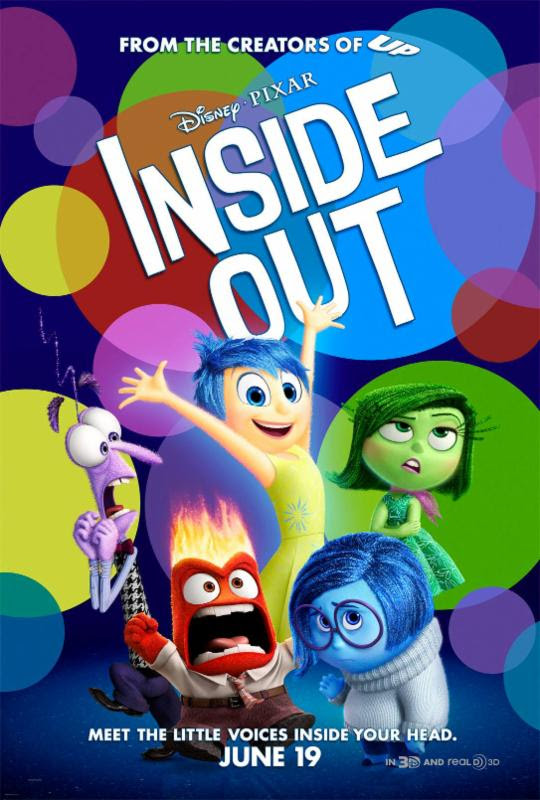 Movie poster for ‘Inside Out.’ Courtesy/Reel Deal Theater

The majority of the action, however, is in Riley’s emotional “headquarters” where joy, sadness, fear, anger and disgust are at the controls of Riley’s moods. Core memories, personality islands, long-term memory, imagination, dreams, the subconscious, the forgetting of memories, all get attention in this film about what makes us tick. It is cute and funny and profound all at the same time.

This is one of the most insightful animated films to come along in a while. Do try to see it! This 94 minute film is rated PG. Oh, and there is a short Pixar piece before the movie called “Lava” that is very cute!

“Inside Out” opened June 19 to packed theaters and is highly rated among viewers. It is now one of my favorites!