Cinema Cindy Reviews: ‘Fantastic Beasts And Where To Find Them’

“Fantastic Beasts and Where to Find Them” is a new film based on the book by J.K. Rowling, creator of the Harry Potter series. As in those stories, there are in this one magic people, wizards, witches and the like, and then there are the rest of us. We’re called “Muggles” in England, but in the U.S. (this story takes place in New York City), it turns out we are just called “non-maj” for non-magical. 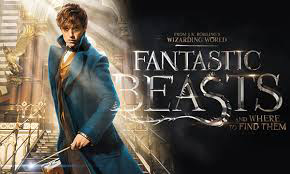 Movie poster for ‘Fantastic Beasts and Where to Find Them’.

Arriving in New York on a ship from England in 1924 is a magical person by the name of Newt Scamander. He is carrying a leather suitcase that makes growling noises occasionally and whose latches keep popping open. Through a series of encounters right after he arrives in the city, Newt loses his suitcase and begins to be followed by a young woman. The woman, Tina Goldstein, works for MCUSA the Magical Congress of the United States, formerly as an investigator, and she wants to bring Newt up on charges. The man who inadvertently switches cases with Newt is a non-maj named Jacob Kowalski, a World War I veteran with a dream of opening a bakery. These three are the main characters of the film. So the case must be found, the creatures that have escaped the case must be tracked down, and all this without non-maj people realizing what is happening.

Of course, things are not that simple. MCUSA is concerned about an escaped wizard causing public damage. An activist named Mary Lou Barebone is calling for people to eradicate magic people. Her orphanage harbors a very troubled spirit. The editor of the paper is supporting his senator son for reelection and ignoring his younger son, caught up in the anti-magic craze. Newt’s suitcase holds a whole workshop and zoo of the magical creatures he has discovered and saved from around the world. And Tina has a sister, Queenie, who can read minds.

Although some of these threads are not well developed or explained, Fantastic Beasts is an entertaining film. In 3D it is a real treat, the fantastic beasts flying around and all. Apparently this is a bit of a backstory to the Harry Potter series as Newt’s eventual book is one that Harry will read while studying at Hogwarts. The beasts are very creative and believable in CGI. And the casting for the film is superb.

Eddie Redmayne is near perfection as poor Newt Scamander, chasing his lost beasts. (The one that loves bling is pretty funny!) Katherine Waterston plays Tina quite convincingly. Kowalski is also a great character, played by Dan Fogler. A dark side wizard is embodied by Colin Ferrell. Alison Sudol is a very engaging Queenie.

Fans of Harry Potter will enjoy being in that world again with this film, though the story is decades before Harry. The characters in this story are not children, so kids may have trouble relating to the film. In fact there were a few young kids in front of us who had had enough at some point during the film and couldn’t sit still. Fantastic Beasts is “Rated PG-13 for some fantasy action violence.” Older elementary school kids through adults will love it.