“Exodus: Gods and Kings,” Director Ridley Scott’s take on the epic Bible story of the Exodus, will not be replacing “The Ten Commandments” anytime soon. Or as my husband said, exiting the theater, “Cecil B. DeMille’s legacy is safe.”

Exodus: Gods and Kings is shot in dark tones and features a great many poorly lit scenes. The visuals are as ominous as the score. Some of the lines are mumbled. The finer details are lost in the murkiness on the screen. Perhaps that is all intentional. We never quite know what is going on in these shadows. And Moses never quite knows what God is up to.

Christian Bale’s Moses appears more concerned for his brother-cousin, the young pharaoh, than he is convincing in his role as liberator of the enslaved Israelites. Joel Edgerton’s Rameses the Second (or so the Pharaoh is named here) is better developed: uncertain of himself, the lesser favored son of Pharaoh “Seti” played by John Turturo. 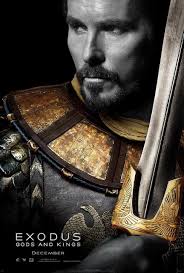 Though only a bit part, Tuya, mother of Rameses, is played by Sigourney Weaver. The chief elder of the slaves is Nun, played expertly by Ben Kingsley. Maria Valverde’s Zipporah lights up the screen and Tara Fitzgerald’s Miriam is picture perfect, as well.

The film is well cast, the special effects work well, and the score is appropriate. On the other hand, the editing is choppy, never staying long enough on a scene. Added to this, the film has taken liberties with a beloved Bible story, a big risk for Ridley Scott.

So the film is entertaining, if not biblically accurate. This is particularly true in the relationship between God and Moses. At first, Moses uses his military skills to organize an Israelite reign of terror on Egypt, thinking God wants him to employ his talents as a general. But this tactic is taking too long, and God indicates that Moses is not really needed.

At that point the ten plagues begin to rain upon the Egyptians one after the other with no clear cause and effect for Pharaoh’s understanding. Moses is just an observer at this point, not God’s representative. But perhaps we can relate. Early on, Moses’ ego got in the way of what God wanted to have happen.

Exodus: Gods and Kings was not quite the “300” meets the Bible that we were expecting. The CGI is subtly used and quite effective, not the whole tone of the film. The film is rated PG-13 for the violence of the slavery, executions and battle scenes.

How does the film portray God? Watch and find out, remembering Elijah’s experience of the “still small voice”.