By Cynthia Biddlecomb
Los Alamos
“Arrival” is the latest truly science fiction movie to hit the screens. Loosely based on a short story by Ted Chiang entitled “Story of Your Life”, the film puts flesh on the story’s bones.
Chiang’s framework sets up the deeper discoveries made by the characters, but most everything else in the film, including character names and contexts are different. In my opinion, the visual story works better as a whole, giving us more time to delve into the experience of space aliens visiting our planet. 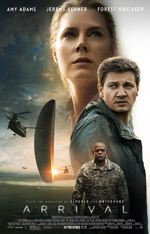 Amy Adams plays Louise Banks, a professor of linguistics, called upon by the military to help after twelve alien ships arrive and park themselves around the world. Jeremy Renner plays the theoretical physicist from Los Alamos recruited to gather science information from the visitors. Recruiting both is Forest Whitaker as the military colonel in charge of the camp next to the ship that landed in Montana.
As often happens in the plots of such stories, humanity reacts out of extreme fear in nearly every nation of the world when the ships arrive. As scientists and linguists attempt to communicate with the aliens, panicking people, governments and their armies all lose patience. This unknowing leads to violence, looting and hoarding, markets tanking, and the threat of a military attack on the ships.
As the linguists and theoretical physicists try to decipher communications with the aliens, the tension builds. Militaries are convinced the planet is under threat from them and react accordingly. Scientists hope the visitors want to exchange technological information to advance our knowledge. Nations hope they want to establish trade. In the short story the aliens say they have come “to observe” us. But in the film, their answer is much more specific.
What does become clear, as Louise learns and lives into their language, is that these creatures don’t experience time like we do. Where time is linear for us, it seems more circular or simultaneous to them. Louise starts experiencing moments with a daughter she will one day have, little pieces of motherly love and connection at many stages of the girl’s life. These feel like lovely memories that are yet to happen. If you could see in advance how your life journey will play out, would you still want to live it? Louise answers, “Yes. I wouldn’t miss a moment of it.”
There is fear in this story. There are violent responses to that fear. But the film wants instead to be life-affirming. Scientists will be entertained by what the film posits about time and physics. Liberal arts folks will enjoy the process it portrays of trying to decipher the alien communications. Romantics will appreciate the love between mother and daughter.
Arrival is “Rated PG-13 for brief strong language” and I would add scary-looking aliens and violent tensions. Older youth may appreciate the film. Adults will marvel at what the story is trying to tell us about our experience of time.
Menu
LOS ALAMOS