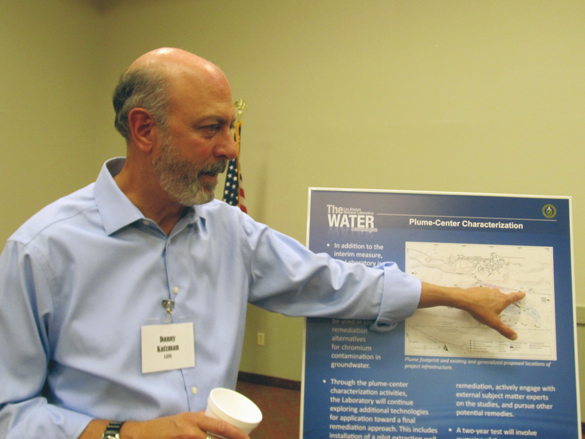 Danny Katzman, LANL water stewardship program manager, discusses proposals for containing the chromium plume in the regional aquifer during a Sept. 29 presentation at Cities of Gold. Photo by Roger Snodgrass/ladailypost.com

POJOAQUE PUEBLO – Nearly nine years have gone by since Los Alamos National Laboratory formally reported the presence of a potentially carcinogenic chromium contaminant in the regional aquifer under the lab.

The probable source was soon traced to an era in which hexavalent chromium dissolved in various fluids was commonly used to clean aluminum heat exchangers in cooling towers and a steady stream of the effluent was flushed from outfalls into the canyons. Over time wave of chromium infiltrated the strata of the Pajarito Plateau and eventually reached the regional aquifer where a hint of elevated concentration was first noticed.

According to NMED, the reading came from the regional aquifer well R-28, which was completed in 2004. The department charged the lab with having buried the information “in a lengthy table in an appendix to the completion report for the well on April 28, 2004,” rather than providing immediate and specific notification required by the regulations. 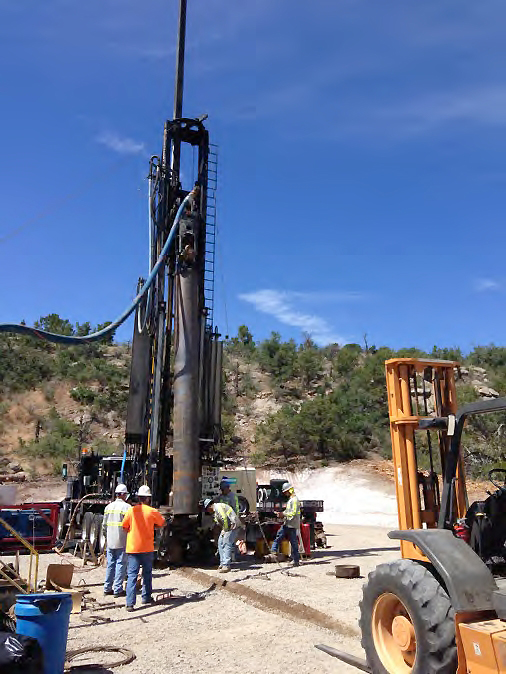 Drilling to install the CREX extraction well began on July 4, 2015. This well could be used to control the southern boundary of a mile-wide concentration of chroium in the regional aquifer. Courtesy/LANL

Thus began a heated episode in the history of the lab, arousing public interest and criticism of its checkered environmental history. A panel of experts from the National Academy of Science was called in to study the situation and changes were made in well-drilling procedures, and data collection and accessibility. A period of monitoring and characterization took place under guidelines outlined in the laboratory’s 2008 Site Wide Environmental Impact Statement

Lab officials reopened the discussion last week with a call for public comment on a draft environmental assessment coupled with a public meeting Sept. 29 at the Cities of Gold Hotel. The poster-style meeting focused on the progress that has been made in understanding the extent of the problem thus far, as well as a range of future plans

Kay Birdsell, an environmental projects leader at the laboratory who has studied groundwater pathways in the local terrain and chromium remediation, said that based on quarterly monitoring, the plume, which is located approximately a thousand feet below the surface of the plateau, has grown to about a mile by a half-mile wide, and is about 100 feet thick in the top of the aquifer.

“The center of the plume remains fairly steady, but since 2011, it’s expanding,” she said. The actions proposed in the environmental assessment are meant “to control the plume for now, while we study more and figure out a final remedy in the long run.”

There are two main concerns about the expansion of the plume, she said. One is that it sits about half a mile from the county’s closest drinking water well, which not currently at risk because it is screened to two thousand feet and draws water from much deeper in the aquifer. More worrisome is the fact that the southernmost edge of the plume is approaching the northern boundary of the Pueblo of San Ildefonso.

“The plume might be advancing in this area – at least its concentrations are,” said Danny Katzman, the laboratory’s water stewardship program manager. “We don’t want it to advance, and we want to make sure it stays well north of the boundary.”

He described a combination of interim measures that would be used to control the edge of the plume by extracting water and drawing it to the surface where it would be treated to state drinking standards and then injected back into the plume, where the hydraulic effect would help curb further migration. Meanwhile, the characterization process would continue, looking for the most effective way or ways to reduce the chromium concentration in the center of the plume, which is as high as one thousands parts per billion.

In terms of time, the Environmental Assessment states, “It is anticipated it will take to 8 years for this process,” in order to meet the needs of DOE and NMED for selecting and implementing a final remedy.

“This is an incredibly complex problem,” Katzman said. “It has taken us nine years to develop our understanding well enough to feel like we can take an action with confidence the actions we’re going to take are going to be effective.”

Having inherited such a deeply embedded generational problem, lab officials point to the period from 1956 to 1972 as the period when the damage was sewn.

One description provided in the 2010 Los Alamos Historical Document Retrieval and Assessment (LAHDRA) project recalled, “The Water Boiler’s cooling tower used potassium dichromate by the hundreds of pounds; waterborne effluent ran down the nearby creek, and sometimes chromium ‘rained from the sky,’ and car windshields had to be replaced (Personal communication, G. Neely, 1999).” Another item identified by LAHDRA states that “the blowdown discharges from the cooling tower (about 60,000 gal. per week) included approximately 14.5 pounds of hexavalent chromium (LASL 1973b).”