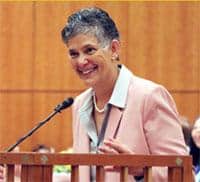 In her State of the Judiciary speech, the Chief Justice also appealed to lawmakers to support a constitutional amendment to extend the time for the partisan election of newly appointed judges, improve judicial salaries to help attract well-qualified attorneys as applicants for judgeships and fund key budget requests from the courts.

Plans for improving court operations are part of an initiative called “Advancing Judicial Excellence” that originated last spring at a meeting of chief judges, court executive officers and representatives of magistrate and municipal courts.

“This initiative, which will provide the framework for the judiciary’s strategic planning and budgets for the next three years is rooted in two simple questions,” the Chief Justice told lawmakers. “Are we doing our best work? And how can we do better?”

She identified three areas where the Judiciary can make immediate  improvements:

To help courts identify issues that need to be addressed, the Judiciary has contracted with the National Center for State Courts for a workload study of the district, metropolitan and magistrate courts.

“We hope to learn how we might streamline processes, improve efficiencies, reduce delay and identify where additional judges and staff are needed,” the Chief Justice said.

A grant from the State Justice Institute will pay for the first-ever evaluation of appellate court processes.

The Judiciary has proposed two measures to the Legislature to simplify the judiciary’s organizational structure by giving cities with populations over 1,500 an option of having their municipal court cases handled in magistrate courts and allowing counties to transfer jurisdiction over probate matters to the local magistrate or district court. If the legislation (Senate Bill 173 and Senate Joint Resolution 8) is enacted, such transfers would happen only if requested by the local government and approved by the Supreme Court.

“Why wouldn’t a community want the option to create a more efficient, less confusing court system? Let’s begin to build a better system with these good government proposals which are good for our citizens,” the Chief Justice told lawmakers in her prepared remarks.

Already underway by the Judiciary is a consolidation of administrative functions of magistrate and district courts within each of the state’s 13 judicial districts. This began last fall with a pilot program in the Twelfth Judicial District and has been expanded to the Sixth Judicial District. All districts will have completed the transition by the end of the current fiscal year.

“All district and magistrate court clerks will be comparably paid and cross-trained, allowing us to move staff where we have shortages, thereby keeping courts open,” the Chief Justice said.

The Chief Justice highlighted several funding requests to the Legislature: