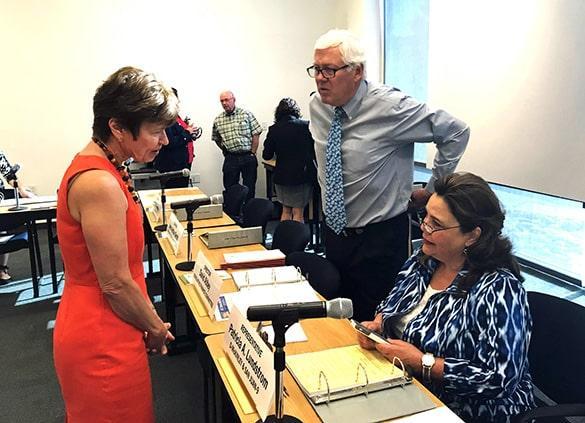 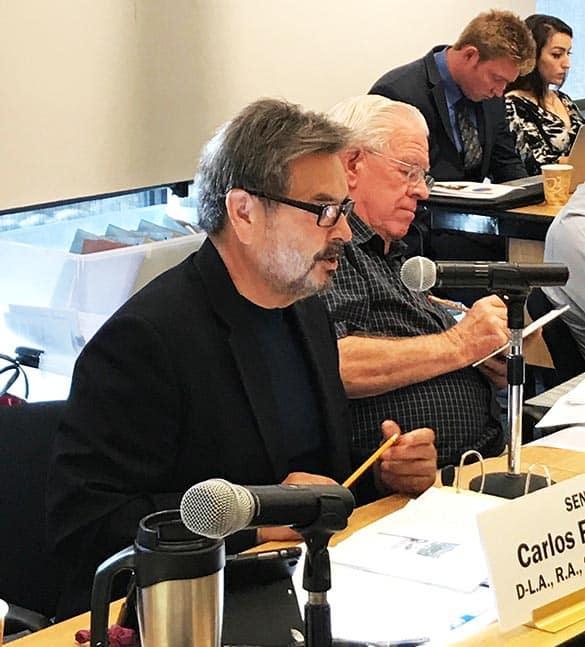 Concerns about the potential loss of gross receipts tax revenue to Los Alamos County and the state were discussed during a meeting of the Legislative Finance Committee Wednesday at UNM-LA.

In her welcome address to the Committee, Los Alamos County Council Vice Chair and Democratic nominee for House District 43 Christine Chandler said she was sure the senators were aware that a non-profit company has been selected for the Los Alamos National Laboratory’s new contract. She explained that the company, Triad National Security, LLC, is comprised of three entities, Battelle Memorial Institute, the University of California and Texas A&M. She said UC and Battelle are 501c3 entities and Texas A&M is a “governmental” entity.

“I also understand that there are some integrated subcontractors notably Fluor and a company called Huntington Ingalls and there are a few other minor subs, but we don’t know the full scope of all that,” Chandler said.

She said Los Alamos County will do everything it can to ensure a smooth transition to the new contractor.

“We are excited and optimistic that the team will be an excellent steward of the Lab’s science and national security mission as well as a strong operational manager. There’s much we still do not know about Triad’s structure and interest. We do not know whether or not it intends to seek 5013b status for the LLC, nor do we know how much subcontracting they will be doing in terms of dollars and so forth. It’s not clear when we’re going to know the answers to those questions,” Chandler said. “Obviously knowing about how it’s structured and its revenues and so on is very important to our revenue predictions and our plan, and I’m certain that the state is very interested in knowing that for their planning purposes as well.”

Chandler said the County understands from Director-Designee Thomas Mason that the LLC is working to resolve the issue as soon as possible and will be sharing that information with County officials as soon as they know.

“It’s my understanding that Triad will assume operations in November and we are looking forward to working with them,” she said.

Committee Chair Rep. Patricia Lundstrom asked Chandler what kind of impact Triad becoming a non-profit would have on the local budget. Chandler said when the County was looking at SB-17, a bill to stabilize gross receipts tax revenues received from prime contractors at Los Alamos and Sandia National Laboratories, which was vetoed by Gov. Susana Martinez last year, the County stood to lose in the neighborhood of $17-20 million. She added that knowing the structure and how much subcontracting will occur is important to see how much the County and the state would lose.

Sen. Carlos R. Cisneros, one of the sponsors of SB-17, asked Chandler if the director-designee had met with the County to talk about the impact and whether they would be amenable to pursuing for lack of a better description SB-17 again in the 19th legislative session. He said he thinks it is important for the Committee to understand “where the Labs lie on that issue”.

Chandler replied that the County has not yet met with the director-designee.

“We have sought a meeting with him and are hoping and expecting one in the next couple of weeks. We have directly asked what their plans are, at least in terms of whether they intend to pursue the nonprofit status and we have not gotten any answers from them yet. They have indicated that the issue is complicated, and they are sorting it out,” Chandler said.

Cisneros said he had posed the question as the sponsor of SB-17 because he was concerned about the loss of funding to the local government and also of $25-30 million of general funds lost.

“The veto message certainly suggested that we should use the threshold in limiting, or if you will allowing, the taxation of a nonprofit organization. The problem in doing that is that it would have brought in Presbyterian Hospital and we didn’t want to impose a tax on them when our intent was very explicitly to continue the tax initially at the Laboratories. There was no question about Sandia but back in the day the question was whether or not Los Alamos would be a nonprofit or a for profit organization,” Cisneros said. “Now, perhaps we will pursue the issue again. Part of that veto message also suggested that we should have been part of a larger tax initiative, which created political problems and cost us, and we just couldn’t lift a huge tax reform initiative in the last legislative session. I guess for lack of a better term, we’ll try it again next year. I hope by then we’ll have some significant information as to how the new administration will look at the idea.”

In vetoing SB-17, Governor Martinez called the bill problematic, “a poorly-crafted tax policy” and “another piecemeal attempt at tax reform”. She said a proposed amendment requiring all nonprofits with revenues over a certain threshold to pay GRT would have remedied the issue. She also stated that the revenue loss will be less than what it is claimed to be, that if the prime contractor is a nonprofit, the subcontractors become taxable.