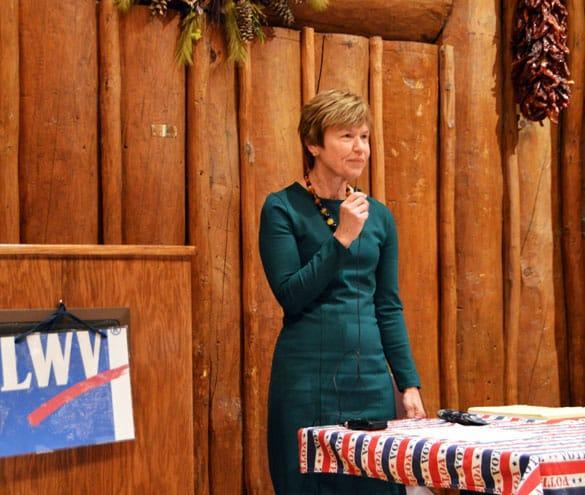 House Dist. 43 candidate Christine Chandler listens from the audience during the League of Women Voters forum Wednesday night at Fuller Lodge. Photo by Carol A. Clark/ladailypost.com 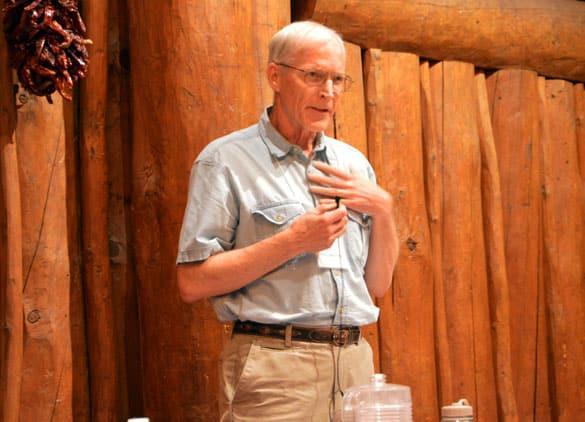 The second of two candidate forums was presented to Los Alamos citizens by the League of Women Voters Wednesday night at Fuller Lodge.

This forum featured candidates for the State House of Representative for District 43 and judges for District Court in two divisions. As at the first forum, only those candidates with opposition in the primary were invited, which meant all the candidates at the second forum were Democrats.

The two democratic candidates for the House Dist. 43 seat share many of the same goals. Voters had a chance to learn what sets them apart Wednesday.

“I’m here tonight to say it’s time for bold action,” said County Council Vice Chair and attorney Christine Chandler in her opening remarks. “We as a state have been locked into the notion that the problems we face are nearly insurmountable. We need to shake those ideas off right now and act boldly and decisively.”

The public education system is failing, but Chandler said we have to get past the finger pointing and work together.

“We need to stop saving for a raining day because it’s raining on our kids now,” she said.

Chandler’s ideas include: pre-school for all, fair pay for teachers, fully funding education and applying “proven best practices.” Other priorities include healthcare for all, including mental health care and drug treatment. The judicial system must incorporate the latter as part of the sentencing process when appropriate, Chandler said.

“As a lawyer, legislative analyst and a person with a longstanding interest in public policy I am prepared to take on these challenges,” Chandler said.

Chandler pointed to her experience on County Council, where she takes all points of view into account when making decisions, she said.

“I am willing to stand for what I think is right and to advocate for it,” Chandler said.

Retired physicist and County Councilor Peter Sheehey said he would take a scientific approach to governance.

“Just about every issue has a scientific dimension,” he said. “Bad laws are made without scientific analysis.”

“We need more scientists in the legislature,” Sheehey said.

Sheehey said he has proved that he is electable by receiving the most votes of any candidate for County Council in the last election. He attributes his high vote count to doing “what I said I was going to do.”

Sheehey said education was paramount to his family when he was growing up in a working class home and education is one of his top priorities. During the question segment, he said he supports funding for early childhood education. He suggested taking one percent of the permanent fund to pay for it.

“It’s an investment in the people of our state,” Sheehey said.

Both candidates support the “community schools” concept of bringing nutrition, including meals into the schools, along with health services, including mental health. Both agreed that disadvantaged areas should be helped first.

Sheehey supports a 10 cent gasoline tax while gas prices remain low to improve New Mexico roads, which are “in terrible shape”. He also advocates bringing broadband Internet to the entire state. These investments will pay off in economic growth, Sheehey said.

“The infrastructure has been bled because of the short-sighted view that we should not raise taxes,” Chandler said. “This has disadvantaged us in the area of economic development.”

When asked about their top priorities, education topped the list for both candidates.

Chandler said looking at raising the current minimum wage of $7.50 an hour was a priority, along with health care reform.

“I view healthcare as a right,” she said.

Sheehey also named healthcare as a top priority, along with protecting the environment.

“We need to put science into solving the problem of water quality,” he said.

Both candidates feel water is the biggest environmental issue in the state.

“We’re on the precipice of water shortages,” Chandler said.

Rural communities are in conflict with urban communities and fair and balanced solutions must be found, she said.

Sheehey said the water quality act and the oil and gas acts were not being properly enforced.

“The government has let things go on, which damage our groundwater for generations,” he said.

In their closing remarks, the candidates both pointed to their skill set and experience.

“It’s my goal to make science and politics work together,” Sheehey said.

His skills make him uniquely suited to investigating complex problems, he said.

Chandler said her experience and as a legislative analyst at the state legislator for four years make her an especially qualified candidate.

“I looked at a huge array of bills that were very complicated,” she said. “You need to be able to bring your skills to a large number of issues.”

For insight on statewide and district-wide races and more information on the candidates, visit www.lwvsfc.org  to view the Santa Fe League of Women Voters Guide.

Editor’s note: Details on judicial candidates participating at this forum will be detailed in a separate report. 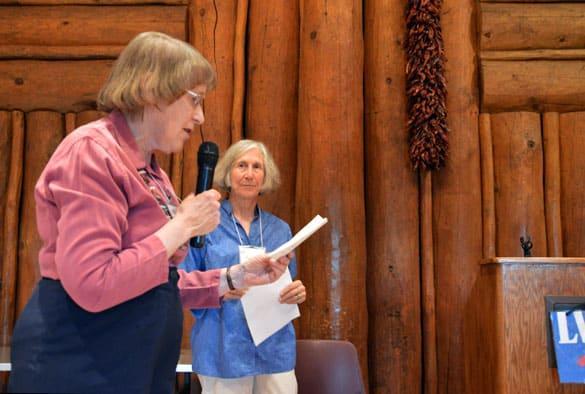 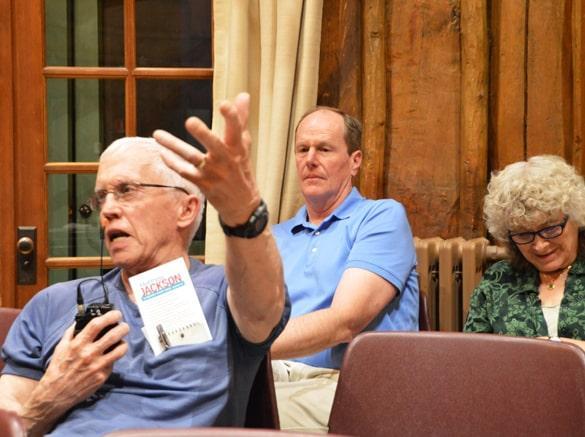 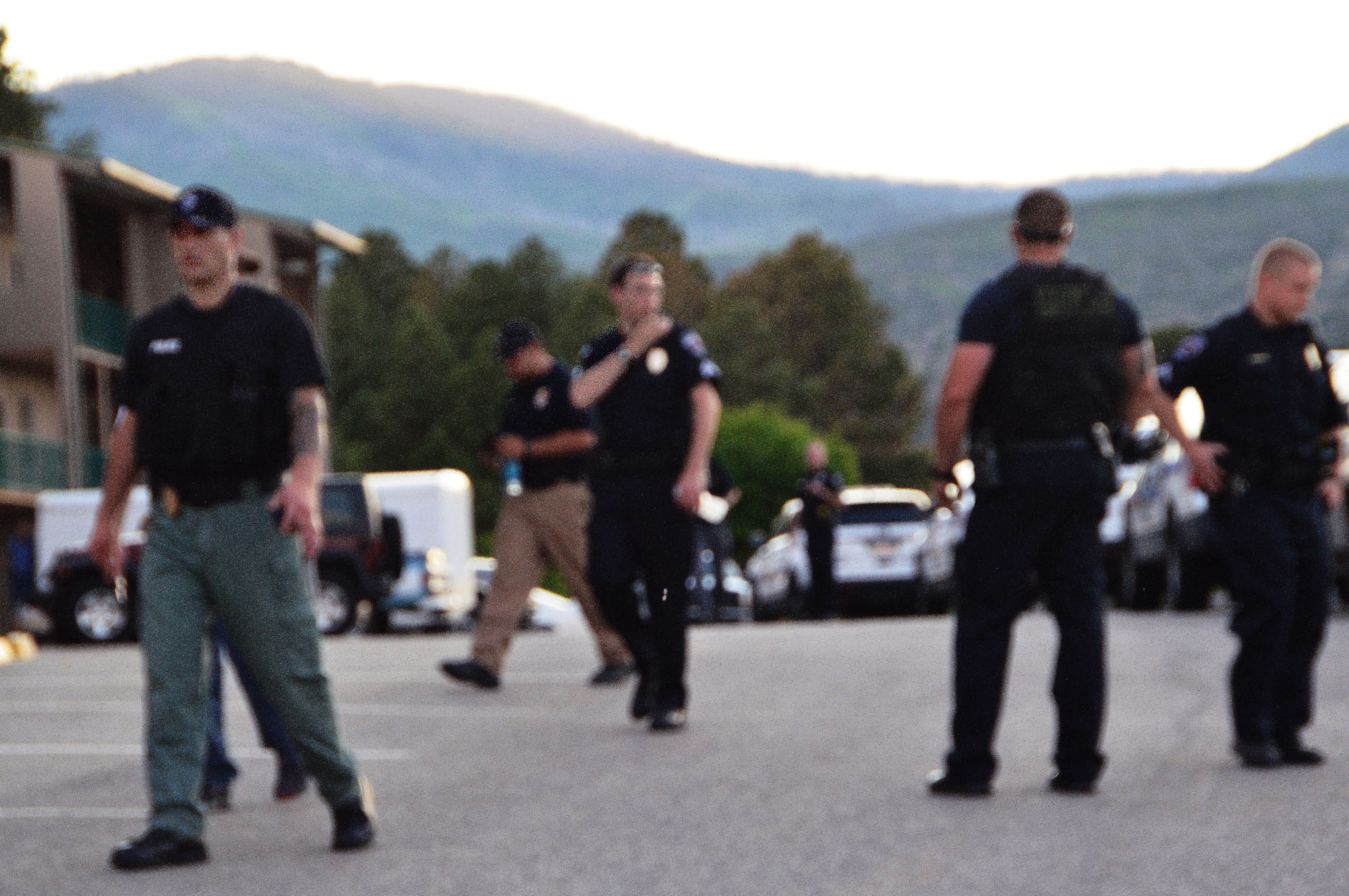 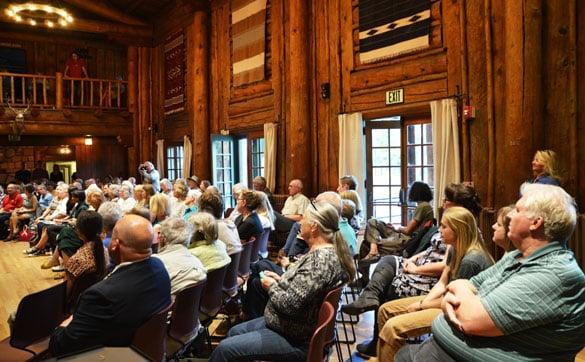