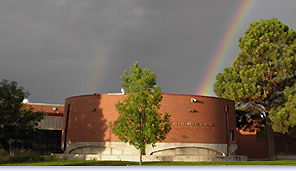 The sweep by DOE’s RAP team (Radiological Assistance Program) resulted in an “all clear.”

The assessment was the result of the Laboratory’s investigation of an inadvertent spread of Technetium-99 by employees and contractors at LANSCE as reported in the Los Alamos Daily Post Monday.

LANL has determined that about a dozen people came into potential contact with this material, and some tracked small amounts of Technetium-99 off-site. The Laboratory reports that the contamination poses no danger to its employees or the public.

Chamisa was the only school that was assessed, as no other school district facility was deemed to have had a family member with possible contact with some Technetium-99.

“We appreciate the thoroughness of the lab in assuring the safety of our students and staff,” Superintendent Gene Schmidt said in a statement of the LAPS website.

According to the EPA: all isotopes of technetium are radioactive. Technetium-99, chemical symbol Tc-99, is a silver-gray, radioactive metal. It occurs naturally in minute amounts in the earth’s crust, but is primarily man-made.

The most commonly available isotope is Tc-99m (called metastable Tc-99) and is the shorter-lived parent of Tc-99.

Most Tc-99 in the environment comes from a few sources:

Extremely small amounts of Tc-99 have entered the environment near a few radioactive waste disposal sites.

Once in the human body, Tc-99 concentrates in the thyroid gland and the gastrointestinal tract. The body, however, excretes half of the ingested Tc-99 within 60 hours. It continues to excrete half of the remaining Tc-99 every 60 hours that follow. After 120 hours, only one-fourth of the ingested Tc-99 remains in the body. Nearly all of ingested technetium will be excreted from the body within a month.

As with any radioactive material, there is an increased chance that cancer or other adverse health effects can result from exposure to radioactivity.

Special tests that measure the level of radioactivity from Tc-99 or other technetium isotopes in the urine, feces, and exhaled air can determine if a person has been exposed to technetium. These tests are better done soon after exposure as the body constantly excretes Tc-99 once ingested. However, hair retains Tc-99 for long periods and can be an indicator of Tc-99 contamination. The tests require special equipment and cannot be done in a doctor’s office.