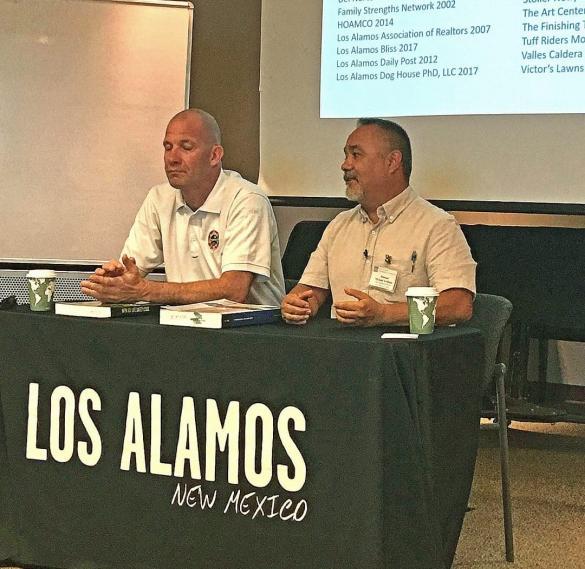 Arellano, who has been in code enforcement in Coloraro, Texas and New Mexico for more than 25 years, explained that his and Wetteland’s jobs are interlinked with the commercial code and the fire code tied together but different. He said chapter after chapter in the commercial code says, “Work with the Fire Department” because there are codes that merge the two codes. Wetteland has been with the Los Alamos Fire Department for 17 years and has been fire marshal for the past three years.

“So we are seen a lot together because I don’t want to show up at a business and say okay I’m requiring this, then Jeff shows up later and says I’m requiring this. It’s better if we just show up together and say we’re just requiring this and this is what we can do to help,” he said. “We are here to help, unfortunately sometimes we get in on the backside when a project is already started or somebody’s moved in and then we’re having to try and enforce some of the codes.”

Arellano explained that he oversees commercial and residential buiIdings but that the state oversees electrical, plumbing or mechanical work. Wetteland said his job is similar to Arellano’s and that every time they look at a set of plans for construction or they’re dealing with a code enforcement issue, they’re taxed with providing for the safety of the visitors and inhabitants of that building.

Wetteland said his code book is a little different on the fire side in that he deals more with fire safety features, systems, fire alarms, exits and egress.

“Everything is very intertwined. We work very closely on how we get to the finished product on both ends,” he said.

He said he knows the code enforcement issue has been a hot topic.

“There are a lot these code enforcement issues that have to do with life safety and that is my job, to create a safe environment in Los Alamos,” Wetteland said.

Arellano said when plans come in for someone with a new business or taking over a business, all the requirements come out of the code. He said he doesn’t enforce requirements that are not in the code or have not been adopted by Los Alamos County Council. He said sometimes it is difficult for contractors to follow all the state and county requirements, which is why a lot of times it’s best to get a design professional that knows the process.

“If it’s not in here (the code book), call us out on it. I don’t enforce stuff that’s not in the code or has not been adopted by Council. It’s difficult sometimes for contractors to follow all the different requirements with three different sources for regulations.,” he said. “That’s why a lot of times it’s best to get a design professional … we can typically walk people through it but it’s a little confusing. Sometimes it gets confusing to me!”

During questions and answers time, several issues were raised including concerns about unlicensed businesses operating in the County. One business representative expressed concern about the amount of “under the table” businesses undermining local business and putting the community at risk because they are not licensed, untrained and don’t know the applicable codes. She said she would like to find ways to help residents become more aware of the issues and when they hire people to make sure they are licensed to be there.

Illegal waste disposal by contractors at the County’s eco-station also was discussed, particularly the issue of the inability to track whether the material is being dumped by unlicensed contractors.

Wetteland said one issue with the regulation of waste disposal is that the County doesn’t want people “fly dumping” in the canyons.

“If you make things too arduous, you’re going to have canyons full of garbage, and I know that doesn’t support what you’re discussing,” he said. He added that it is very hard to enforce business rules, that the process is very weak statewide, not just in Los Alamos County.”

Arellano said the Los Alamos Police Department can’t run all the license plates of vehicles hauling waste to the eco-station because they have some rules they have to follow. He said he is working with LAPD on doing it the proper way. He said there’s a lot of illegal dumping at the eco-station, including some asbestos tile that was recently sent out there. The person who took it out there was contacted and charged the cost of the remediation.

Wetteland said the concern is the lasting effects on people who are removing asbestos, that it’s hard to detect before you take it down.

“All those folks that are visiting or using the facility, that’s who we’re looking out for,” he said.

Wetteland said asbestos can be a daunting issue but that there’s really no alternative that he knows of for providing for the safety of all those people. He said asbestos permits are not being required for buildings newer than 1995 because the hope is that asbestos was not used in them.

“People sleeping in unfamiliar surroundings – that’s the most dangerous situation for people to be in,” he said, adding that on the building code side, a bed and breakfast inn will be considered as a residential structure.

There were several questions relating to buildings that have been sitting empty for long periods of time such as the former Hilltop House hotel. Arellano said buildings that are not meeting the new codes are often considered “legal non-conforming”. He said if a building is vacant for a couple of years, that term does not apply anymore and the building has to be brought up to code as in the case of the Hilltop House.

“That building sat for long enough and was non-conforming to such a degree that we’re making them go through new code process,” Arellano said.

Both Arellano and Wetteland stressed that they are always willing to sit down and talk to business people whether they are looking at leasing or purchasing a building, looking at renovations or facing new requirements due to an annual inspection. He said with anything that’s going to be financially daunting he has to be reasonable about time frames.

There was some discussion on business premises changing their use. Arellano said he doesn’t address buildings that have been unoccupied for a couple of years unless it’s a life safety issue.

“The ones I have down in White Rock – the structural walls are coming apart and there are gaps between the 12 X 12 inch columns,” he said, adding that the condition of the buildings is going to cause problems and someone is going to get hurt.

“Don’t sign a lease, don’t hire an architect without one. We can’t design what you’re going to do but we can tell you simple answers to simple questions like am I going to need a sprinkler system for this building. That could be a make or break it depending on how you’re operating,” Wetteland said.

“Michael and I both live here and we understand the decisions we make, the interpretations of the code that we make, can affect the economic vitality of this town,” he said. “… Saying no and getting into a conflict with someone does not make my job easier and if someone comes to me with a plan that can work and I can justify it in this code book, I say yes.”

Wetteland said he is the only one on the fire end that has the jurisdiction that is looking out for the County’s, Fire Department’s and his own legal liability and that the code puts enough legal liability on him personally to make sure that he does his job. He said he can’t just say the County will take care of me if he gets sued for not doing his job.

“There will be arguments about if he’s over-enforcing the code or picking on someone, but the bigger argument will be if someone gets hurt,” he said. “I would have to live with that for the rest of my life … that I was the only one in town to take care of that, and I let it go and now someone is hurt or worse … there’s a big issue there, it’s not something that we take lightly.”

Pig & Fig Café owner Laura Crucet said she wished she had gotten into the process earlier while planning to move into a new space. She recommended reaching out to Arellano and Wetteland and having an inspection before signing a lease.

“I encourage you to reach out. They’re not out to get anybody or make anybody’s business fail … they want businesses to thrive and succeed,” she said.