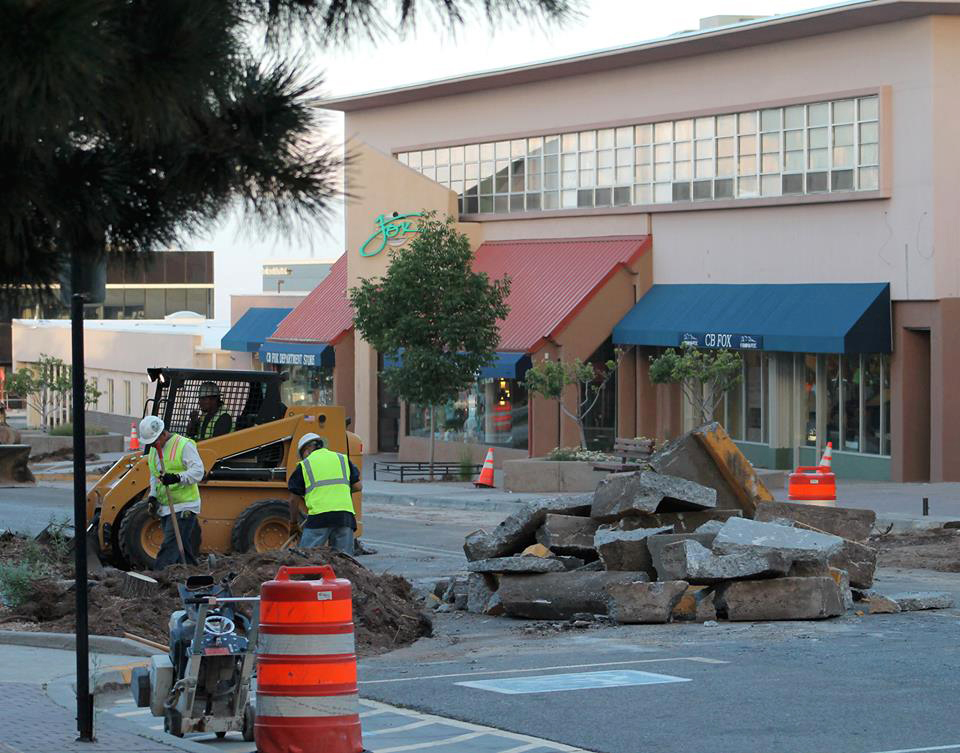 Update as of July 3 – the project area for the Central Avenue Improvements Project underway is Central Avenue from 15th Street to Oppenheimer and Oppenheimer from Trinity Drive north to the library driveway, ending at the entrance to the west parking lot.

Improvements include mill and overlay of asphalt, upgrade all sidewalk ramps to ADA standards, one additional crosswalk, concrete pedestrian crossings, tree removal and replacement, changes to planters, and changes to street and pedestrian lighting.

Night Work: Effective today at 6 p.m., the contractor will start setting up the closure of Central Avenue between 15th and 20th Street with the full closure in effect at 7 p.m. The full closure will remain in effect at night between 7 p.m. and 6 a.m. Mondays through Thursdays.

During the daytime: Central Avenue will be open to one lane of westbound traffic. Eastbound Central traffic will be detoured at 20th Street to Deacon and back to 15th Street. Alternate routes are advised whenever possible. On-street parking along Central Avenue will be closed; use alternate parking adjacent to or behind area businesses.

Transit stops on Central between 20th and 15th will be closed: check www.AtomicCityTransit.com for the closest alternate stop.

The Contractor will start work on the south side of Central between 15th Street and 20th Street. The first week of night work will include demolition. Expect heavy truck traffic and significant noise. After the first week, noise levels should drop signifcantly as the contractor starts trenching for electrical work.

Access to area businesses will be maintained during the daytime; however, those wanting to access south Central businesses are urged to park off Deacon and use the rear customer entrances wherever possible. There will be a temporary pedestrian crossing on Central at the Los Alamos Post Office; pedestrians may also cross at Bathtub Row or at 15th Street.

The public is asked to stay out of established work zones for safety reasons.

Note: This project will require considerable traffic control and increased congestion on Central Avenue. Use extreme caution when traveling through the work zone and watch for construction activities as well as pedestrian and bicycle traffic.

Feb. 26, County staff hosted a public meeting at Fuller Lodge. A total of 37 people, including staff, attended the meeting. Click to review of copy of the presentation.

An additional public meeting to present the updated design was held Tuesday, March 11. Seventeen members of the public attended. Click to view the associated presentation.

Based on public input, the Transportation Board’s recommendation and staff’s recommendations, an updated Central Avenue design and Oppenheimer intersection was generated. The following is a description of the scope as well as information regarding the recommended design elements.

The pavement condition index for Central from 15th to 20th is 44.35 – that is a poor rating; and from 20th to Oppenheimer it is 60.92 – that is a marginal rating. The proposed pavement treatment is to mill out the worn surface of asphalt (remove the top 3″ of asphalt) and place a new lift of asphalt on top.

There also are some proposed drainage improvements throughout the project limits to help remove water from the street to better protect the road, keep Central Avenue storm water from draining into Ashley Pond, and improve drainage around the Farmers’ Market parking lot to eliminate the marsh area. This asphalt milling project will not expose the road bed gravels except where trenches occur and this should be less disruptive to the motorist.

The majority of the utilities have already been upgraded in the last five years, which will minimize the amount of trenches. When new pavement is constructed, there is a federal requirement to update the sidewalk ramps to meet current ADA standards. All of the ramps along Central will need to be updated.

On Central from 15th to 20th, the existing cross walks will remain and a new cross walk added between the Metzger’s parking lot and Central Park Square parking lot near the existing Atomic City Transit stop on Central to promote safe crossing of pedestrians where people frequently jaywalk today. The new colored concrete crosswalk design will not only be ADA compliant it will have improved lighting and will remove the trees from the sightlines that have hidden pedestrians with the current configuration. The trees will be replaced in a six-foot brick paver streetscape that also will have new benches, bike racks, waste and recycling receptacles. MainStreet Los Alamos received a grant for $70,000 to update the streetscape furniture and to refurbish the existing streetlights with new paint and LED fixtures to have a uniform look and to help reduce energy costs for street lighting. Click to view a cross section of Central Avenue.

At Oppenheimer and Central, since there is a requirement to update ADA ramps, this required staff to evaluate the intersection sidewalk ramps. In 2011 there was consideration to have bump outs or a roundabout at Oppenheimer and Central that a CDM Smith study had proposed. In 2014, there were four alternatives considered during a public meeting process for this intersection. As one goes east bound on Central just before Oppenheimer, the road grade is 7 percent and then when one crosses Oppenheimer, the road grade lessens to a 5 percent grade.

In climbing this hill on Central Avenue, bump outs at Oppenheimer and Central would have required a bicyclist to merge into the travel lane at a slow speed and this was determined to be a safety issue. Also, the roundabout was ruled out because the maximum approach grade for a roundabout is 4 percent slope. The design alternative selected was to reduce Oppenheimer to one lane each way at Central Avenue intersection to facilitate pedestrian movement and not alter the width of Central Avenue as it currently exists.

The bike lane on Central as one travels eastbound will end at the same location just east of Oppenheimer and then at that point ‘Sharrows’ will be added to Central Avenue where vehicles and bikes share the road on the gentler grades as one goes Downtown on Central Avenue. Provisions will be made to allow for a future “HAWK” High intensity Activate cross WalK signal across Central Avenue should warrants be met.

The project was advertised for construction bids May 4, with bids due May 27, 2014. Council award of the construction contract to Century Club Construction occurred at the June 10 Council meeting.