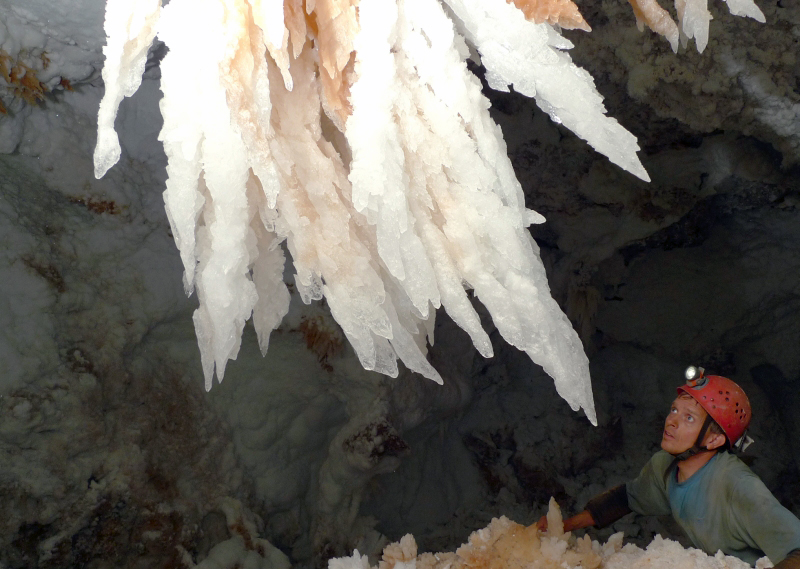 Come to PEEC at 6:30 p.m. April 5, to learn about the history of exploration in Lechuguilla Cave.

Local caver John Lyles will present highlights of his 20 years of involvement in the project to map Lechuguilla.

Volunteers dug open Lechuguilla Cave, the “Jewel of the Underground” at Carlsbad Caverns National Park in 1986.

The cave quickly earned world-class status among caves, passing 50 miles of discovered length in four years, and 100 miles within the first decade of exploration.

John Lyles’ personal involvement began in 1993, during a LANL-sponsored scientific project. In 1995 he began to attend regular camping expeditions in the cave, and helped discover and map many new areas.

Lyles has continued to work in partnership with cave cartographers, photographers, and expedition teams to map and document the complex branches of the cave.

The effort has been rewarded with multiple discoveries of significant new chambers and extensions to the shape of the cave. More importantly, he and others have trained a new generation of cave explorers to continue pushing the frontiers of this grand cave, clearly one of the most beautiful in the world.

Lyles came to Los Alamos from the east coast, where his interest in caving began in 1975 while at Virginia Tech in the Appalachian Mountains.

Professionally, he is an electrical design engineer at LANL, at the proton accelerator at the Los Alamos Neutron Science Center. His work and interest in caving have dovetailed together to lead him to various parts of the country and finally to New Mexico.

Lyles enjoys the solitude and isolation from the hustle of work on Earth’s surface while spending weeks underground with groups of like-minded friends exploring the unknown.

This talk will accompany the opening of the Underground of Enchantment exhibit, a collaboration with Mesa Public Library sponsored by the Friends of the Library.

The opening reception will take place 4-5:30 p.m. at Mesa Public Library and 5-6:30 p.m. at PEEC. Lyles will share how the map of Lechuguilla Cave has grown over the years to include 136 miles of overall length. This program is free.