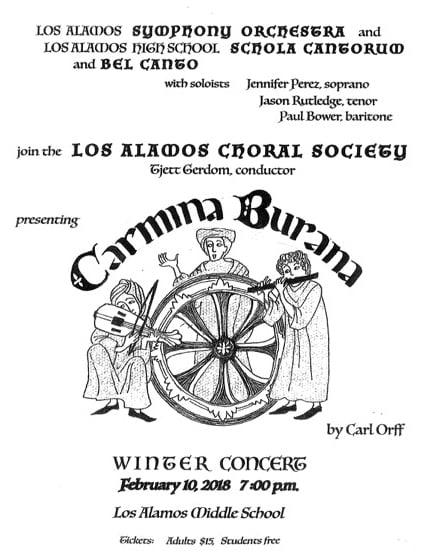 At times in the last couple of weeks, the Los Alamos production of Carl Orff’s “Carmina Burana” has seemed like a traveling show—but it has now found a home.

“Carmina” was originally scheduled to be presented in the Duane Smith Auditorium, but as the show day approached, it became apparent that construction on the lobby of the auditorium would not be completed in time to allow for last-week rehearsals or the performance itself.

Tickets for adults will cost $15. Students will be admitted free.

Preparation for a Difficult Work

Two rehearsals this week are being conducted in the Pueblo Complex Gymnasium, and a third (the dress rehearsal) will be held at the LAMS gym.

The production, under the direction of Tjett Gerdom, will be massive by local standards. LACS will be joined by the Los Alamos Symphony Orchestra, and two Los Alamos High School choirs, Schola Cantorum and Bel Canto. Three professional soloists—baritone Paul Bower, tenor Jason Rutledge, and soprano Jennifer Perez—will also be part of the show.

Despite the difficulty inherent in almost-nightly set-up of numerous large musical instruments and more than 100 chairs in a gymnasium with less-than-ideal acoustic properties, the show came alive last week, as the large cast became more proficient and two of the three soloists joined them in rehearsal.

“Carmina Burana” is not your ordinary historical musical composition filled with deep religious meaning expressed in four-part harmony. Orff wrote his controversial cantata after 1934, when he came across texts written in the 11th, 12th, and 13th centuries in secular Latin verse with a smattering of Middle High German, Old Provençal, and Old French. The original writers—religious and social non-conformists—dealt with fickle fortune, drinking, and lust, as well as the joy of spring. “Carmina Burana” became the most famous German composition during the Nazi era.

Orff’s music is direct, loud, and forceful with identical themes often repeated in various parts. It contains little conventional harmony, and the percussion section is often emphasized. The solos are demanding.

The Director and the Soloists

Gerdom, the director, has said that he considers “Carmina Burana” a work of genius. He persuaded Choral Society to let him direct it during the brief hiatus while the LACS Board of Directors was seeking a new permanent choral director after the retirement of Mary Badarak. (Steve Paxton was chosen as the new director and will begin working with the choir on Feb. 20.) Gerdom is a vocalist and trumpet player with a degree in music education and extensive experience as a soloist.

Jason Rutledge is the director of choral activities at Los Alamos High School. He holds a bachelor’s degree in music education (vocal), and, during his five years at LAHS, has led his choirs to many honors. He will be singing the extremely challenging high tenor aria “Olim Lacus Colueram”, the dying song of a once-free swan who is now roasting on a spit.

Paul Bower, a professional singer, director, and teacher with a rich, deep baritone voice, has been a musician for more than 20 years. He has degrees in music from the University of New Mexico and Northern Kentucky University, and he has performed in nearly 40 opera and musical theater roles, recitals, and concerts. This role will demand from him high notes not commonly found in the baritone register.

Jennifer Perez holds a master of music with a concentration in vocal performance from the University of New Mexico. Her brief resumé lists very extensive solo experience. Notably: She has performed lead roles with several Santa Fe Opera (SFO) Community Outreach programs, including children’s operas directed by John Bradley and workshops/presentations directed by SFO Lecturer Oliver Prezant. She has participated as an apprentice with the Santa Fe Desert Chorale and is an occasional soloist for the New Mexico Philharmonic. Her brief aria “Dulcissime” in this show includes extremely high notes.