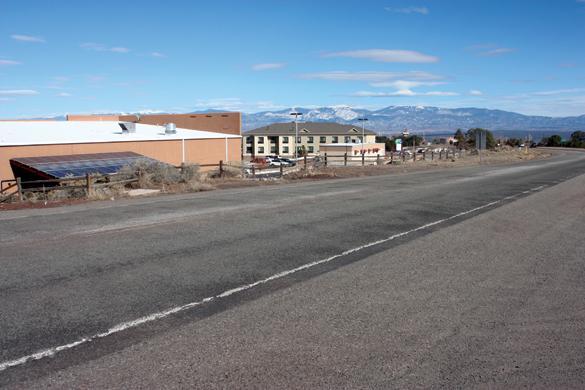 Accessing the Canyon Rim Trail as well as the Entrada Business Park will be easier with the addition of an underpass. Construction on the underpass is expected to begin in 2020. Photo by Kirsten Laskey/ladailypost.com

For those who utilize the Canyon Rim Trail and dare to cross N.M. 502 at its trailhead to access trails on the opposite side or the Entrada Business Park, Los Alamos County is offering an easier, safer method that doesn’t involve darting across the 50 mph state highway when it seems the coast is clear.

The Public Works Department is working on a project to construct an underpass connecting the Canyon Rim Trail and trailhead on the south side of N.M. 502 to the Entrada Drive Business Park.

Senior Engineer Desirae Lujan said the underpass will be a two-way concrete, multiuse structure serving pedestrians and bicyclists. The project costs a little more than $2 million. The state’s Transportation Alternative Program (TAP), through New Mexico Department of Transportation, awarded $2 million in federal transportation dollars for the project, the largest amount granted to a local government agency. The County matched 14.56 percent of that or approximately $300,000 of that amount.

Lujan explained that TAP provided funds in FY 2018 for the engineering plans and the project’s design and the County will receive the remainder of the funds for construction in FY 2020. She said design plans are expected to be finalized by this summer.

“With federal funds, there are many administrative requirements that take time, so the plan is to advertise and bid this project in late 2019 so that we’ll be ready to start construction in spring 2020,” Lujan said.

Once construction gets going, Lujan said there shouldn’t be any impediments to drivers or nearby businesses. The project is expected to be completed in less than six months.

“The plan is to keep two lanes of traffic open at all time and a detour will be built to shift traffic over on either side,” she said.

The detour will fan out on either side of the highway. While traffic should not be interrupted, Lujan said the parking area at the trailhead could potentially be closed at certain times.

This project has been in the works for quite some time. Council approved the County matching the TAP funds back in 2016 and the project is mentioned in the 2017 Bicycle Transportation Plan, Lujan said.

The underpass will allow the trail’s users to safely cross N.M. 502, she said. It also will help improve connectivity between the different trails and businesses.

Lujan said trail users will be able to easily access businesses such as the Los Alamos Co-op Market and other recreational trails. Additionally, visitors at the Holiday Inn Express could easily cross to access the Canyon Rim Trail, which would take them to the downtown area. The underpass also would give easy access to the Atomic City Transit stop, which is near the entrance to Entrada Drive.

“It’s all about connectivity and safety,” Lujan said.

It’s a wise investment because Canyon Rim Trail is popular among residents and visitors alike, she said.

“We hear a lot of good things about this trail,” Lujan said.