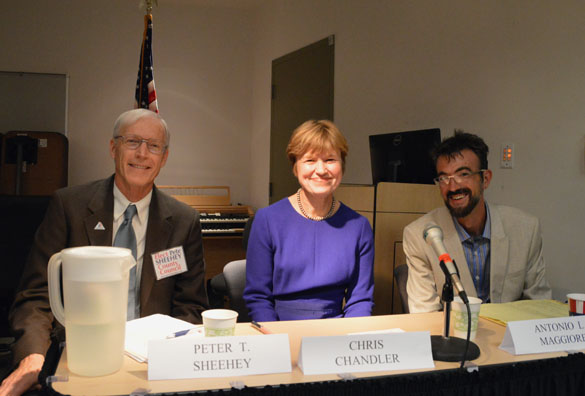 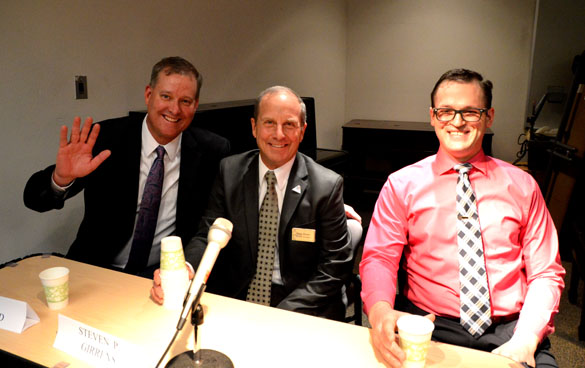 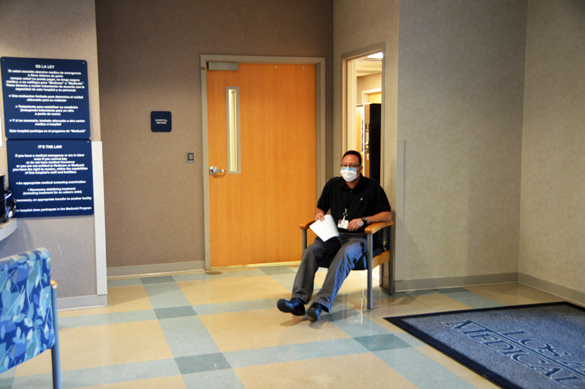 The U.S. House Dist. 3 candidates are both native sons of northern New Mexico. Democratic incumbent Ben Ray Lujan grew up on his family’s farm in Nambé. Republican challenger Michael Romero was born in Embudo and lives in Vadito. Politically, they couldn’t be further apart.

Romero favors a small federal government and states’ rights and said private enterprise and hard work can solve most if not all problems the country faces.

“The U.S. provides us with the opportunity to be the best we can be. When the government gives it to you, it’s wrong,” he said.

“The Federal government has its fingers in everything,” Romero said. He called the Affordable Health Care Act “a mess,” and said health insurance should be handled “like auto insurance.”

Rep. Lujan said government needs to work to build a stronger middle class and stop “giving tax breaks to billionaires.” Lujan said he believes there is a role for government in creating economic opportunity through educational scholarships and support for small business.

“We need to strengthen Medicare and Medicaid,” Lujan said. “The Affordable Health Care Act has insured 20 million people who were previously uninsured.”

Romero said government is “out of control” and would go so far as to privatize the Veteran’s Administration, which he called “broke.”

Lujan said such a move would “endanger the health and well-being of millions of veterans,” adding that he favors reform of the existing system instead.

In their closing statements, Romero urged voters to “go back to simple.”

Lujan stressed solidarity. “We want to welcome people from all over the world,” he said. “We’re all in this together. We can defeat hate and bigotry coming from people like Donald Trump.”

He said he sees his youth (he’s 24) as an asset. Brenner added that he is an advocate for small business.

Jaret McDonald said neighborhood revitalization was an important issue to him. He would urge the County, as well as the populace to “keep it local” by purchasing within Los Alamos County, he said Empowering nonprofits and providing food security for all Los Alamos residents also are goals for McDonald, he said.

Steven Girrens is seeking re-election to the Council. “There are exciting times ahead that I want to be part of,” he said. He pointed to achievements during his term, including building the Teen Center and the Nature Center. Girrens said he sees great opportunities in tourism, and wants to help establish Los Alamos as “the gateway to three national parks.” Housing is an important issue to Girrens as well, he said.

Chris Chandler, attorney and small business owner stressed her love of Los Alamos. Revitalizing the town site and White Rock are high on her agenda, she said. Affordable housing and a rental assistance program should be part of plans to provide more housing in Los Alamos, Chandler said. The town needs both “development and redevelopment,” she said.

“I have strong respect for the Lab and the schools,” he said. “I love this town.”

“It saddens me to see fewer businesses than we had here when I was growing up,” Maggiore said. “As a small business owner, I’m well poised to help bring this business climate back.”

Maggiore said he is strongly committed to green energy. Another goal is to bring “truly affordable housing” to Los Alamos for those who cannot currently afford to live here, he said.

“I want to provide good representation for people that haven’t been represented in the past,” Maggiore said. “I will have a community-based approach.”

All the candidates said they support more sustainable energy production. Maggiore said he would like to see more energy produced locally.

“Let’s use more of the brain power we have here in town to solve our problems,” he said.

When asked how to support local small businesses, Maggiore said controlling rents, workforce training and increasing public transportation were three goals he would work toward.

Chandler said developing a local purchasing preference program for the County, streamlining the licensing and permit process and developing mixed use downtown housing would be her goals.

Brenner said he thought the Lab should leave downtown to businesses. He supports limiting regulation, he said.

“The County should lead the way in using local small businesses,” Brenner said.

Girrens pointed to the need for housing, especially affordable housing, to bring about the growth he said the County needs.

Maestas pointed to her 10 years experience in the Clerk’s Office.

“The part of the job I’m most passionate about is the election process,” Maestas said. “Citizen participation is the heart of democracy.”

Woods said her extensive management and training experience are assets she would bring to the County Clerk post. Woods said good customer service and ensuring proper documentation would be two of her goals.

When asked about using modern technology to improve voter turnout, Maestas said it is important not to move too fast and compromise the integrity of the ballot. Woods suggested looking into using smart phone codes to vote, though she too stressed “we must be careful.” 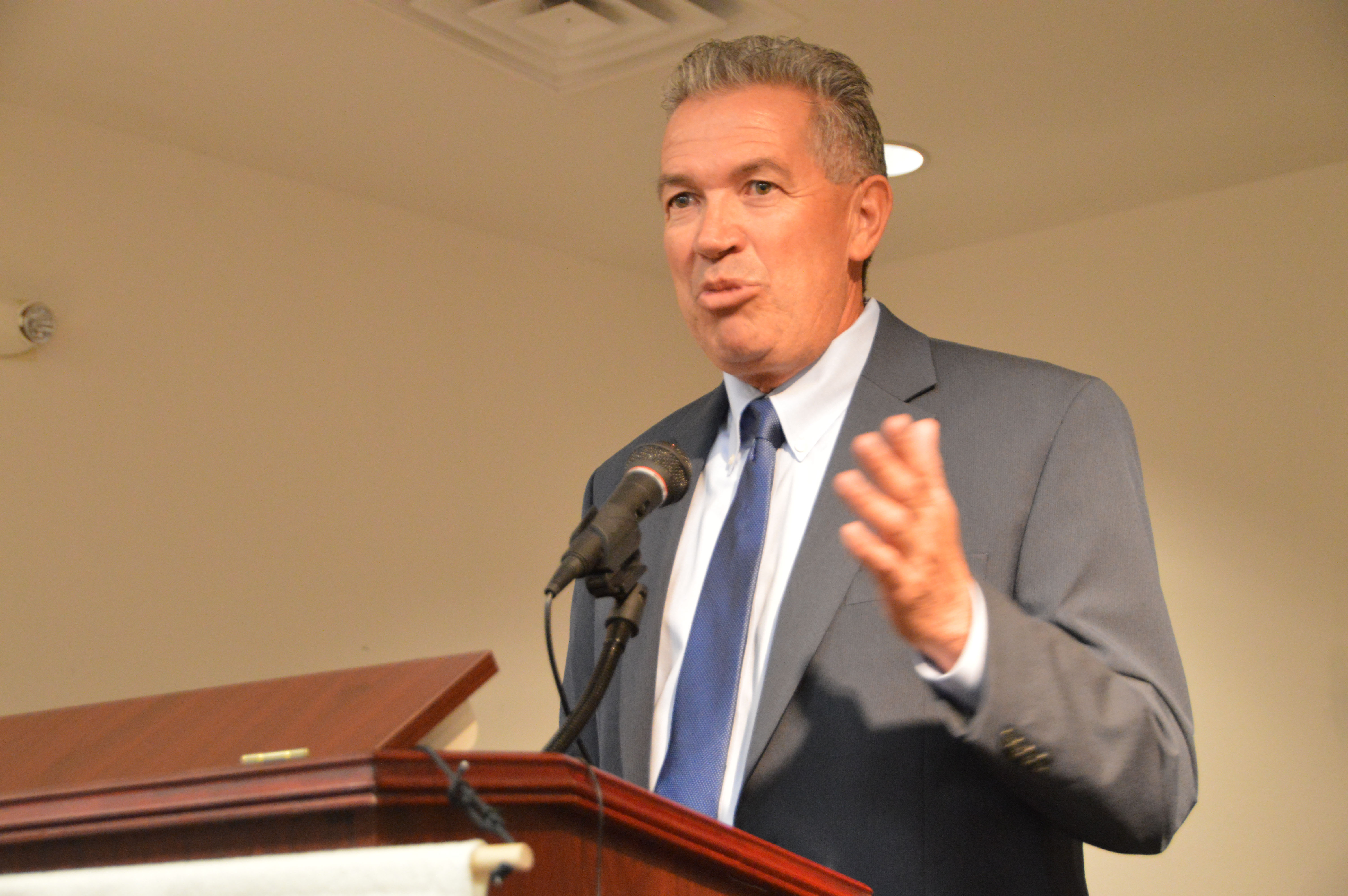 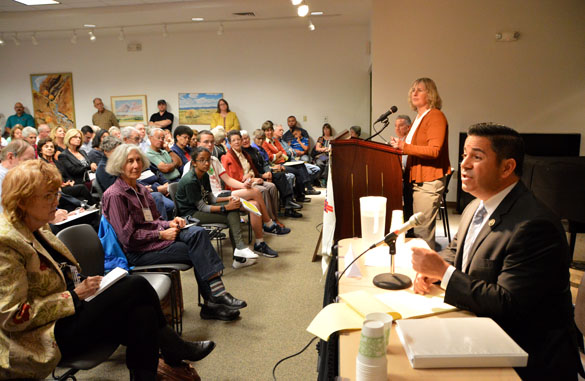 U.S. Rep. Ben Ray Luján speaks to the audience as League President Wendee Brunish listens at the podium during Thursday’s League of Women Voter’s Forum at UNM-LA. Photo by Carol A. Clark/ladailypost.com 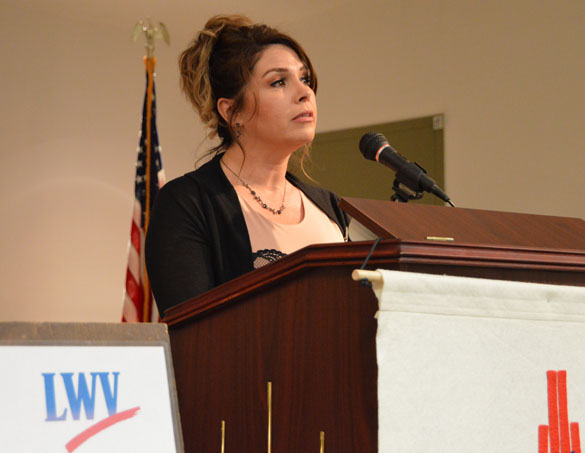 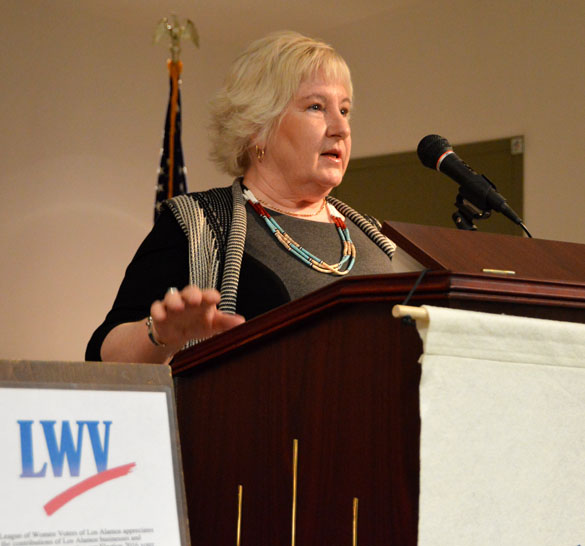 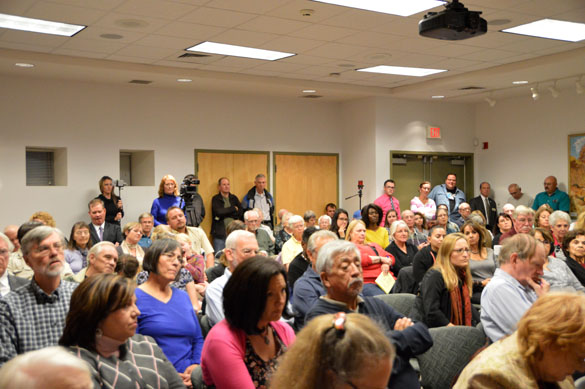 Standing room only at Thursday’s final League of Women’s Forum for this election season. Photo by Carol A. Clark/ladailypost.com 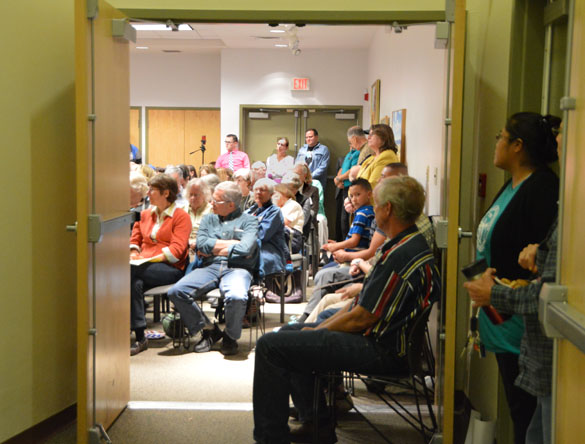 The audience spills into the hallway. Photo by Carol A. Clark/ladailypost.com 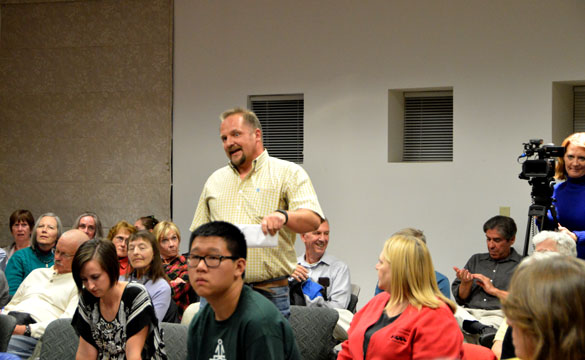 Los Alamos resident James Whitehead questions council candidates at Thursday’s Forum about candidate Jaret McDonald texting the police chief during the previous Forum to let him know a citizen was concerned that presenter John Horne was wearing a gun. The candidates didn’t express much interest in discussing the issue. Photo by Carol A. Clark/ladailypost.com 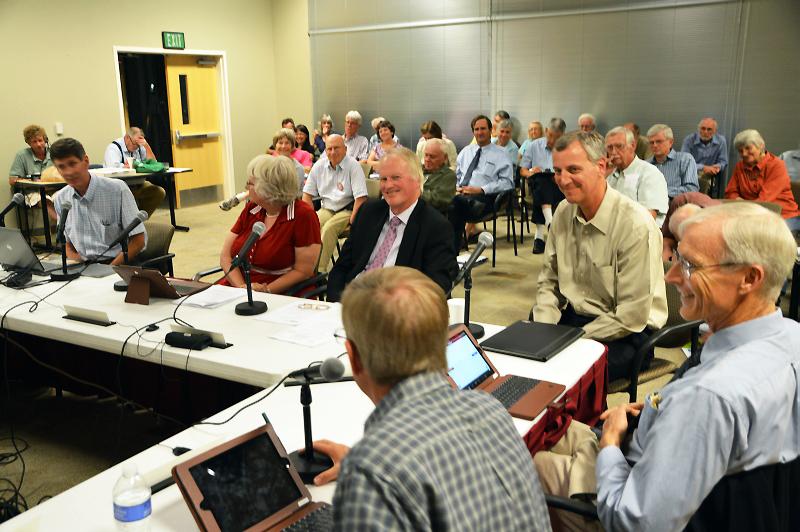 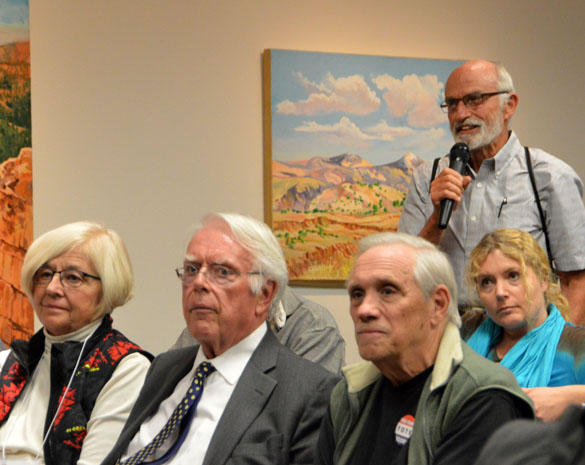 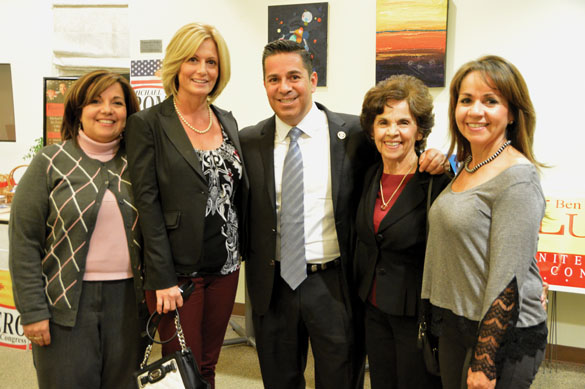 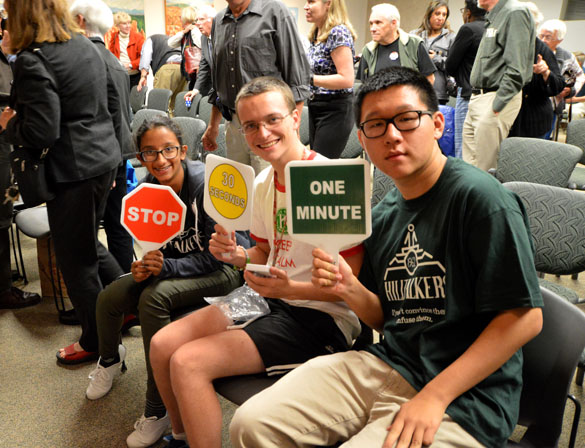 Members of the Los Alamos High School Hilltalkers Speech and Debate Team keep time at the Leagues’s Forum Thursday at UNM-LA. Photo by Carol A. Clark/ladailypost.com