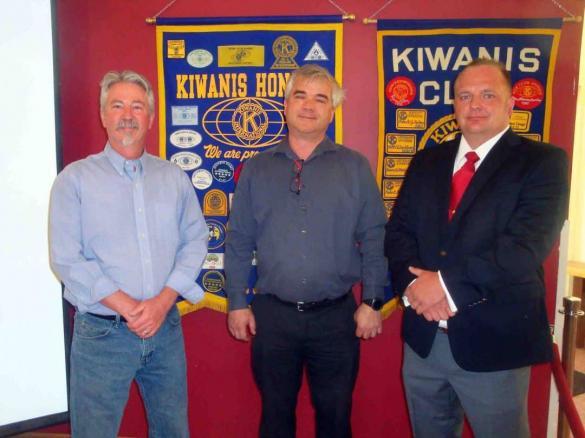 Republican Hugh Rich was invited and told Kiwanis that he planned to participate, but did not attend.

Each candidate who came to the meeting was given five minutes to speak on his qualifications, the reasons he chose to run, and goals that he would pursue if elected.

The candidates’ comments came in the context of a clash between the Sheriff’s Office and the Los Alamos County Council and several related lawsuits that are pending.

Joe Granville, a Democrat running for sheriff, is unopposed in his party’s June primary.

He said his background is “a little bit different” from those of other candidates in the election. He “serves on a couple of boards” and is “the father of a 5-year-old.” He also said he is a former truck driver who once owned High Desert Delivery and is now a consultant for kitchen and bath improvements.

He said he wants “to keep kids out of the criminal justice system,” and, to achieve that goal, he wants children to have healthy things to do in Los Alamos. He also wants to assist people with clearances who need help.

He said that throughout his adult life, “I’ve been a problem solver.” He wants the Sheriff’s Office to become “more of a liaison” with the Police Department and other helping agencies. He would like these agencies to unite to “build on things that are important in town.”

One of his goals, if elected, would be to “work collaboratively with the police and schools.” Another would be “editing” of the local sex offenders list to make sure that it accurately represents the level of danger in each case.

Christopher B. Luchini, a businessman, is the chairman of the New Mexico Libertarian Party. He too is unopposed in his party’s primary.

He said that the position of sheriff in this community is “somewhat of a ceremonial job” and has a “very limited role”— until its duties become the subjects of lawsuits. He noted the “controversy and emotion” now affecting the job and said he would like to “turn down the drama, turn down the lawsuits.”

Under state law, there will be a sheriff and deputy sheriff in this county, he said. The lawsuits will define the department’s duties, and until a new definition is available, the department should be run as it has been in the past.

There can be a division of labor, he said. The Police Department and the Sheriff’s Office each need a set of real tasks for which they are responsible. He predicted that the departments and the public will have such a list in the next couple of weeks.

Commenting on property crime, he said, “There is a lot, and there are significant hot spots in Los Alamos County.” He would like to get residents to upgrade their security systems.

James William Whitehead, a Republican, is a U.S. Army veteran with a bachelor’s degree from Oklahoma State University.

A former deputy fire marshal in Raleigh, N.C., he has lived in Los Alamos since 2013. He is a design engineer at Los Alamos National Laboratory.

“I want to be a functioning, funded sheriff,” he said. In his campaign literature, he says, “…It is time to restore the rule of law within the Los Alamos County Government … Our County Council must now recognize the will of the people by properly funding the office of sheriff, returning to this office the duties and powers granted by state statute and the Constitution of New Mexico….”

He grew up as the youngest child of a single mother. He left home at 15; joined the army at 17; and spent seven years in the infantry. He said he has served as “both a soldier and a leader.” He added, “I have the skills to be a sheriff.”

At one time, he said, “I believed I lived in the safest city in America. That is NOT true.” Reports provided to the council and to the state differ; he wants “to get accurate figures.”

During a brief question-and-answer period, Kiwanis member Lorraine Hartway asked all three candidates how much money the Sheriff’s Office should receive each year. No one gave a hard figure.

Granville, the Democrat, said, “That’s still a matter for the courts.” It depends, he said, on the duties of the office, travel time, etc.

Luchini, the Libertarian, said, “I firmly believe the county is going to lose” in court, at a cost of about $100,000. He said a full-time sheriff with an undersheriff cost about $200,000 a year “for them just to sit there.” They could take on some of the duties now handled by the Police Department, he said, mentioning such things as being school officers. “It depends on the suit,” he said.

Whitehead, the Republican, said, “I agree with a lot of the concern in the community.” He said there are threats that are not being addressed, and people who are not receiving services that they need. There is a “culture of silence,” he said, “on things such as domestic violence.” We must identify the threats first, he said, and then calculate the cost.